Last year's 2021 InfoComm in Orlando, pushed as it was into late October by the pandemic, was barely seven months ago. We awarded a slew of 17 new products with Best of Show Awards back then, honoring entries not only from the handful of manufacturers who managed to show up and exhibit but also those who, through no fault of their own, were forced to withdraw in the weeks and days prior to protect their employees. 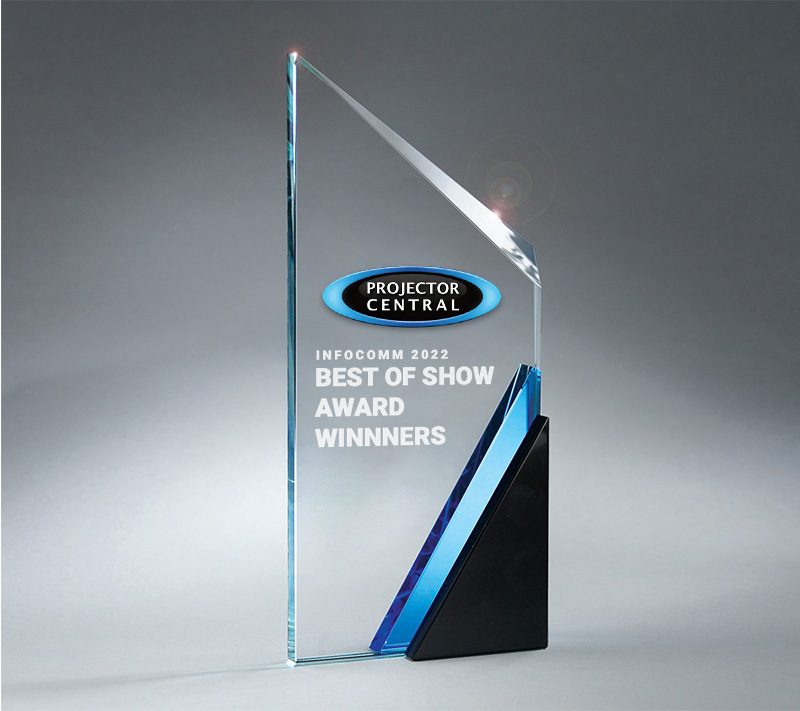 Fortunately, InfoComm is expected to finally be back to its old self this time around—in Las Vegas of all places—and showgoers with an interest in projection will again find a few things to write home about. The trends are by now familiar, with the most obvious being the continued magical shrinking of high-lumen light canons. The claims of "smallest and lightest" in this or that product class are yet again being bandied about the showfloor, and in some cases the advances are palpably jaw-dropping. It is understatement to say that manufacturers are showing more extraordinary mastery of laser projection than ever before. How long before we have a 10,000-lumen model we can throw in an attachÃ© case?

You'll also find some new short-throw solutions among this year's 10 Best of Show honorees, another ongoing trend as retailers and other types of venues keep tapping into new digital signage solutions and experiential projection installations. Of course, beyond these exemplary products on our list we always find a few new things on the floor that we didn't hear about beforehand, and we'll be reporting back on those after the show. Stay tuned. —Rob Sabin, editor 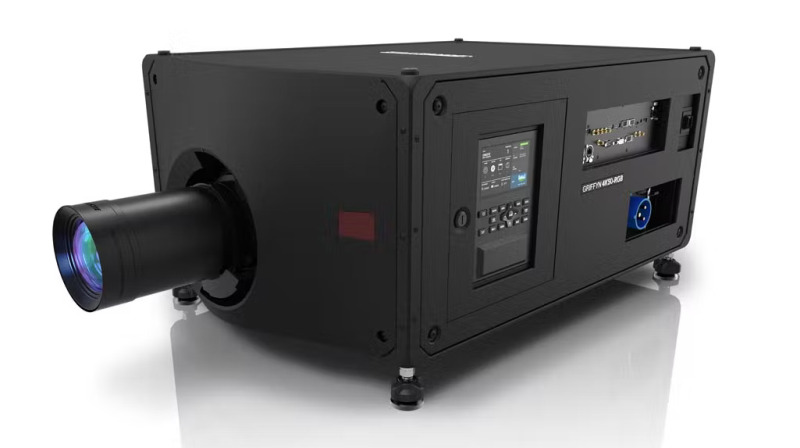 The high-lumen, RGB laser projector category represents the pinnacle of performance, but has traditionally been associated with bulk that can be a hindrance, especially for touring events where size and weight can have real impact on setup. Christie has been especially focused in recent years on stuffing more RGB brightness into smaller boxes, and the Griffyn 4K50-RGB sets a new standard by coming in with 50,000 lumens in an all-in-one package that weighs just 197 pounds, more than 80 pounds lighter than its closest competition. The usual wide RGB color gamut is here—98% Rec.2020—along with 4K, 3DLP architecture for sharp images. A longer-than-usual 25,000 hours to half-life for the light source adds icing on the cake. View Projector Details

There are a large number of commercial-grade 1DLP laser projectors under 3,500 lumens today, but essentially no 4K models...except for the Digital Projection E-Vision 4000 4K-UHD. Rated for 3,300 ANSI/3,800 ISO lumens, it's also one of the few relatively compact and quiet DP projectors that fits and performs well in traditional residential applications. A blue-laser combined with a 6-segment WGYWGY phosphor wheel and 8-segment BGYRBGYR color wheel provide the goods, along with the single 0.47-inch DLP chip. The 1.5x zoom with vertical and horizontal shift fits a wide range of installations, and integrated HDBaseT simplifies long runs with CAT cable and represents a nice plus not usually found in dedicated residential projectors. View Projector Details 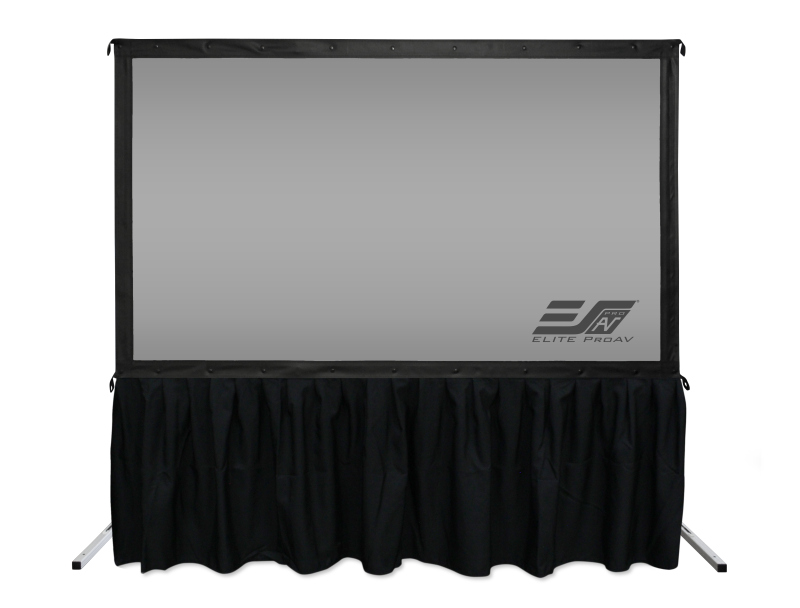 Elite ProAV has continued to find new ways to spin their high-performing Ceiling Light Rejecting (CLR) UST and short-throw materials for the commercial and residential markets, and the PRO103H-CLR2 helpfully fills yet another gap. The easily transported folding portable screen is mated with the company's CLR2, an ISF-certified, scratch-resistant 0.9 gain lenticular ALR screen that rejects up to 90% of overhead light while providing a 160-degree viewing window. Unlike the flagship CLR material or the budget CLR3, both of which are strictly for UST projectors, CLR2 offers up to a 1.2:1 throw ratio, so it's suitable for many traditional short-throw projectors as well to add punch and contrast in moderate ambient light. Elite ProAV has offered a similar, easy-setup collapsible folding frame with its DarkUST 2 CLR material in the past, but only at the 60-inch size. The PRO103H-CLR2, with its 103-inch 16:9 image size, is a perfect companion to one of the new residential UST laser TV projectors or a commercial UST or short throw for larger-scale, traveling presentations. 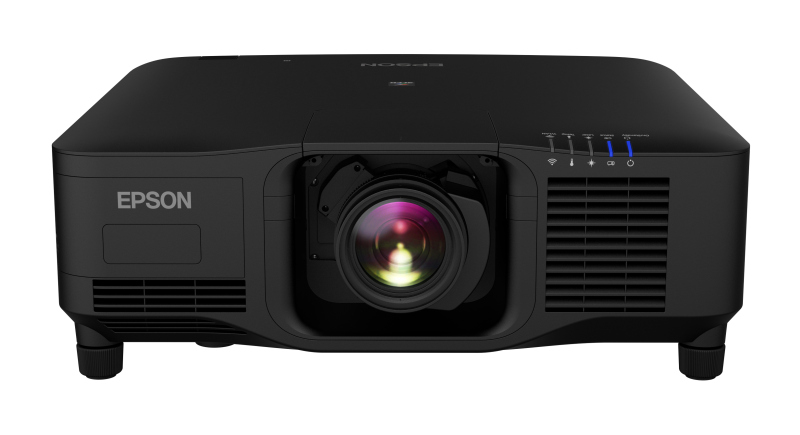 At last October's COVID-delayed InfoComm we awarded a Best of Show to the EB-PU2010, one of Epson's new next-gen large venue installation projectors that was said at the time to be the world's smallest and lightest 10,000-lumen projector. At this year's show Epson has upped the game by offering the EB-PU2220B, which claims to be the smallest and lightest in the ever-more important 20,000-lumen class. They ain't kiddin'. The projector measures just 19.4 Ã 23.1 Ã 8.6 inches (LWH) and weighs only 53.7 pounds. There's not another projector of this brightness in the ProjectorCentral database that comes in at under 100 pounds. Along with compact size and low weight, this new series is packed with features to make setup easy at live events, including 3G-SDI inputs and outputs for daisy-chaining, NFC functionality to transfer settings among projectors, and compatibility with Epson's new PixAlign camera accessory—also an InfoComm honoree—that super-streamlines multi-projector installs. Image quality is excellent thanks to three native WUXGA LCD chips combined with Epson's 4K Enhancment pixel-shifting. View Projector Details 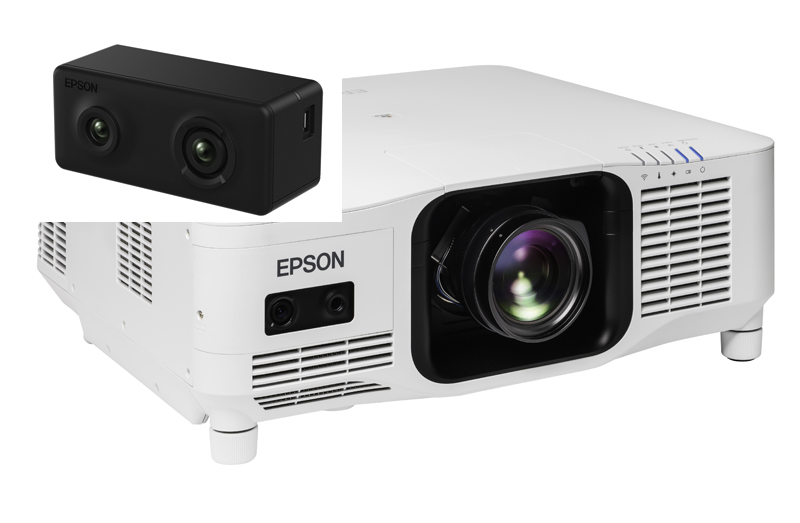 There's nothing new about applying a camera to assist in matching projectors for stacking or edge blending in multi-projector setups. Several manufacturers and third-party software providers offer this, sometimes at a premium. But Epson has freshly packaged this concept in a particularly attractive fashion for some of their new compact-chassis Pro models. Buy the PixAlign ELPEC01 camera for $485 MSRP and you can pop it right into the front-panel compartment on the new models for a nice integrated look. Then, download the free Epson Projector Professional Tool (EPPT) software from Epson's website and you're ready to rock with camera-assisted stacking, tiling/edge-blending, color calibration and remote monitoring. If you're using one of Epson's periscope-style UST lenses or an older projector model, the camera easily attaches to the lens or projector with no tools or viewing angle adjustments required. View Projector Details 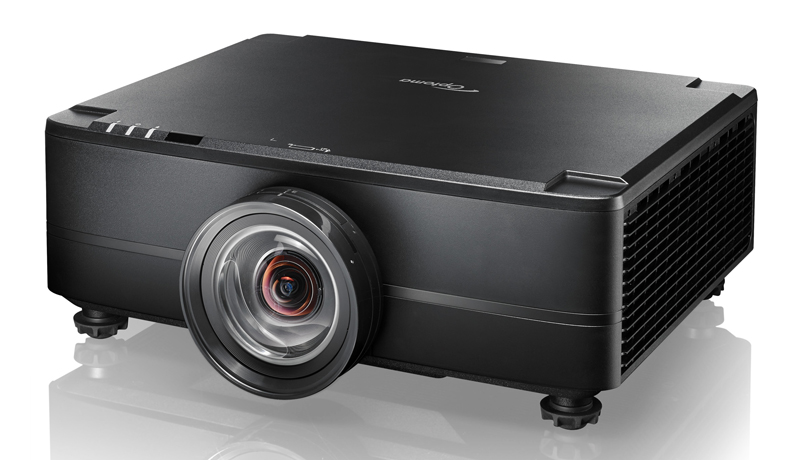 Optoma thrust a new value paradigm on the projector industry when it launched the 7,000-lumen ZU720T in 2020, a 7,500-lumen, WUXGA, compact-chassis laser projector with, holy cow, a permanently attached zoom lens. While it couldn't offer the flexibility of every other 7K-lumen model at the time that accommodated interchangeable lenses, the 1.8x zoom still had plenty of mojo for the majority of installations, and the cost savings led to a then-unheard of $4,999 price for the brightness class. Optoma followed it up with a short throw version, the ZU720TST, and today has taken the concept to yet another level with the 9,800-lumen, ZU920TST short throw laser projector. It's got a 1.6x zoom with a short 0.65:1 throw ratio and like the prior models, aside from the choice to permanently mount the lens there's nothing at all stripped down about it. It offers just what you'd expect in a good installation projector including things like built-in edge-blending, warping, four-corner correction, 360-degree and portrait installation modes, and a dust-resistant IPX6-certified maintenance-free optical engine. And it's compatible with the free Optoma Management Suite (OMS) platform for remote monitoring and control. The only thing you can't do is pay more than $12,999 for it. And did we mention that includes the lens? View Projector Details 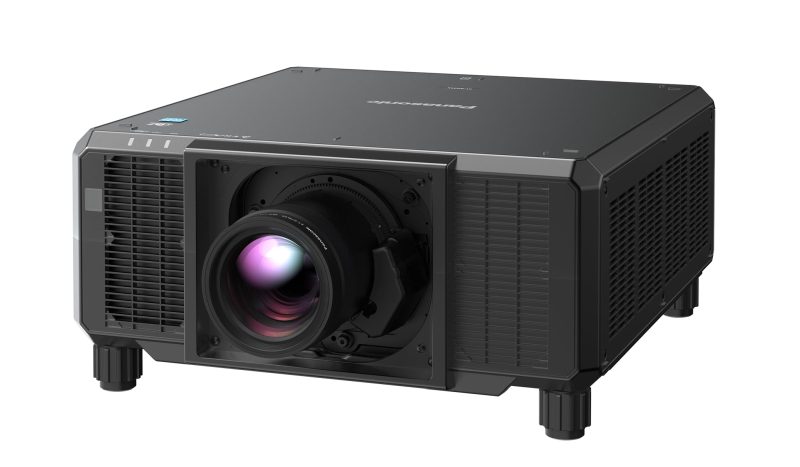 Panasonic, now marketing it's A/V products under the Panasonic Connect brand, has been a leader in driving down the size and weight of its rental and staging projectors, and the new PT-RQ25KU is said to be the smallest and lightest in its 20,000-lumen, 4K, 3DLP laser projector class. At just 21.6 x 8.6 x 22.4 inches (WHD) and 77.2 pounds, it is 40% smaller and 35% lighter than the company's 20K-lumen PT-RQ22K series and offers a body size more similar to the firm's 10,000-lumen single-chip DLP projectors. Resolution of 3840x2400 pixels is achieved with Panasonic's Quad Pixel Drive, and a new Dynamic Contrast setting is said to deliver brighter whites and deeper blacks. Other leading Panasonic features are there as well, including the Multi-Laser Drive engine that prevents loss of brightness if there's a laser diode failure, automatic backup input switching to counter a source failure, and the Smart Projector Control app with NFC interface. An Intel SDM-ready I/O slot allows easy customization of your preferred input ports. View Projector Details

The move toward hybrid and collaborative work spaces and educational settings naturally favors smaller, brighter, more flexible projectors at lower cost. Panasonic Connect has answered the call with the PT-VMZ71, said to be smallest and lightest 7,000-lumen projector available today. Despite having enough light to blast through most well-lit environments, it's almost tiny for its brightness class at 5.2 X 15.7 x 13.7 inches (HWD) and easily carried and installed at just 15.4 pounds. Six-point geometric correction allows projection on any surface, even in corners, and the 1.6x zoom with 1:09:1 to 1.77:1 throw and vertical and horizontal lens shift offers plenty of location flexibility. Images are delivered by a trio 0.64-inch LCD chips with WUXGA resolution. And Panasonic has included wireless LAN capabilities and a new Wi-Fi QR Code feature that lets viewers connect a mobile device by simply scanning an onscreen QR code that automatically enters the network password credentials. Also unusual for many projectors, but appearing on more Panasonic models, is HDMI-CEC control for coordinated operation with HDMI source components. The low-maintenance laser-phosphor light engine boasts a 20,000 hour lifespan (24,000 in Eco) and a long-life filter that goes a full 20,000 hours before needing replacement. Best of all, the PT-VM71 is surprisingly affordable for a 7,000 lumen WUXGA projector at its $3,869 street price. View Projector Details 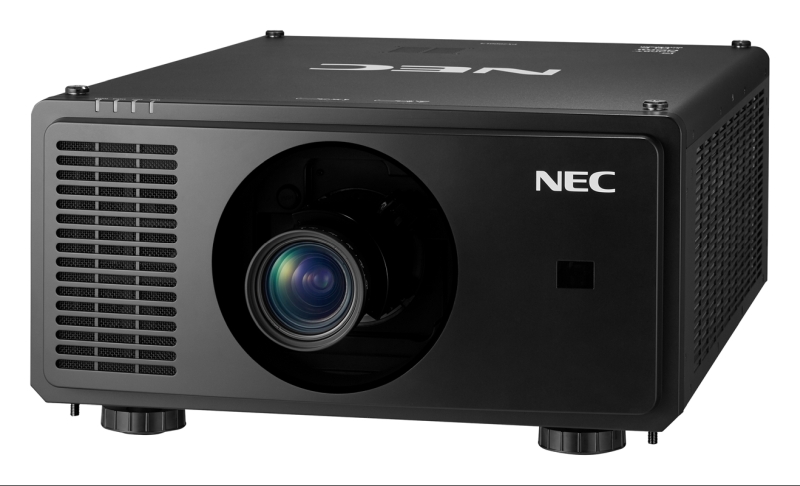 Sharp/NEC's update for the now discontinued PX2000UL bumps lumen output from 19,000 to 21,500 center or 20,500 ISO lumens, while using 11% less power. It is a workhorse projector in a relatively small form factor suited for a variety of high brightness, high-demand applications such as theme parks, simulation, worship, higher ed, museums, and corporate auditoriums. Color fidelity is better than typical of many projectors in this class thanks to an RB dual laser design in which a red laser provides "Red Assist" to the usual blue laser+phosphor architecture. Sharp/NEC's usual mix of installation features are onboard, including geometric correction, built-in edge-blending, and a good selection of optional lenses for throw distances ranging from 3.3 to 137 feet. Installation flexibility is further enhanced by an extensive I/O panel featuring connectors for HDMI, DisplayPort, DVIC, HD-SDI, HDBaseT, VGA In/Out, and RS-232. View Product Details 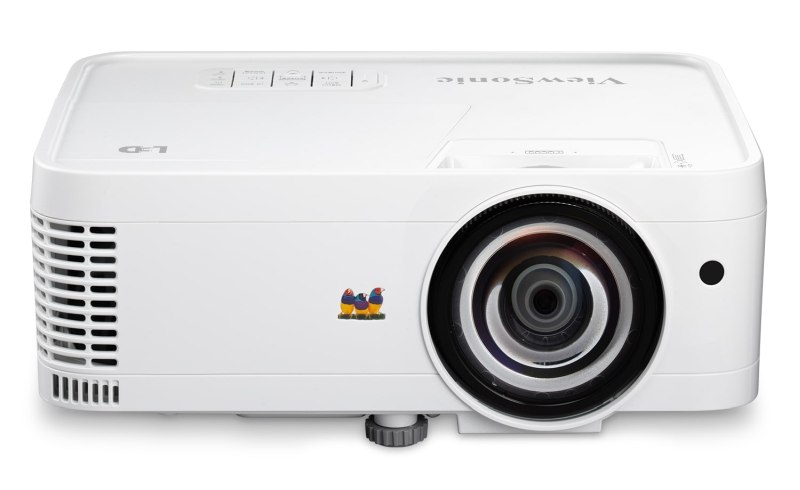 ViewSonic continues to take the path less trodden among commercial projectors by opting for the affordability and other benefits of LED over laser. At InfoComm 2021 in October we recognized the LS500, an affordable 2,000 ANSI lumen/3,000 LED lumen projector with an RGBB LED engine. Now comes the short-throw version LS550WH with similar specs, except for the 0.49:1 throw ratio lens that casts a 100-inch image from 3.5 feet. Otherwise, the LS550WH has the same WXGA resolution and carries in the same benefits of the OSRAM Ostar Projection Power LED engine: 125% Rec.709 color gamut assisted by ViewSonic's Cinema Super Color+ technology; an IP5X certified sealed optical engine that keeps out dust and moisture; a 30,000 hour life span, and the same advantages you see for laser such as 360-degree orientation. At $699 for projector that never needs a lamp replacement, it's an interesting prospect for classrooms and conference rooms alike. View Product Details