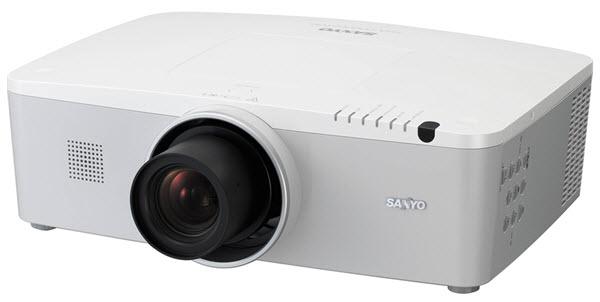 The word we heard the most was "amazing!" This projector is phenominal. Super bright (with all lights on), alive, colors are dazzling... everthing I wanted in a picture and more. The colors are actually better: more crisp, clear and vibrant, than the LCD computer monitor (my previous unattainable standard)! And the price is the same as other "budget" models, but this one is first rate. For churches who project mostly computer images I am convinced that LCD is the only way to go. The colors are much more true and consistent: scenery, flesh tones, you name it. Lens shift is a great feature (sometimes we may want the image lower or higher on the screen than at other times.) This is an absolutely great unit. We are extremely pleased. Thank you, Sanyo!

Any Problems: I would not consider these problems, but things to be aware. For our wired remote we had a two conductor wire run, but this projector requires a three conductor, so we had to run a new wire. Also, the owners manual, both print and disc, gives very little information. I like the projector alot, but the manual is poor. There are still a few functions that I don't know how to operate that the manual just doesn't address. The fan runs a bit louder that I expected, but it's not a big issue. The wireless remote barely works from floor to ceiling (rated at just 16') but we're good to go now that we have a new wired remote run. Overall, we love this projector and would recommend it to anyone.