The Sharp PG-LX2000 has the sort of clunky look that suggests there was little to no money spent on an industrial designer. However, it should appeal to anyone who cares less about how good the projector looks than how good the image on screen looks, especially if there's a tight budget involved.

As you might expect from its $555 street price, the PG-LX2000 focuses on basics. Built around a DLP chip, it offers a native 1024x768 resolution, a 2800 lumen rating (which we measured at 2557 lumens), and relatively few connectors. In a welcome touch, however, one of the connectors is for HDMI, which is often missing from budget models. Like most newer DLP projectors, it also offers 3D, which is a minor extra at best, since it's limited to computer input only, at 1024x768 and 800x600, and Sharp doesn't include any 3D glasses.

What makes the PG-LX2000 stand out is its image quality, particularly for data images, combined with fewer rainbow artifacts for both data and video than most DLP projectors. Factor in the 5.1-pound weight, the convenience of a 1.2x zoom, and a low running cost to complement the low initial price, and the PG-LX2000 can fit nicely for either permanent installation or portable use in classrooms or businesses where cost is a key consideration. 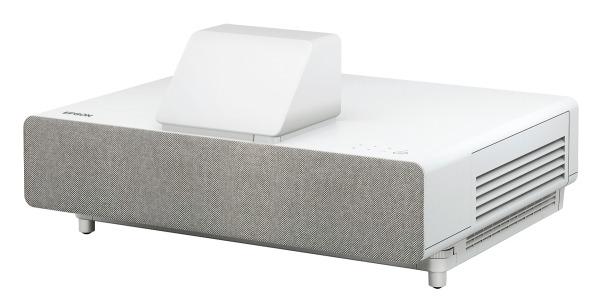 Excellent data image quality. The PG-LX2000 did particularly well on data image quality. Autosync worked notably well in my tests, with images nearly as rock solid with an analog VGA connection as with a digital HDMI connection. From 12 feet away, I could see only the slightest jitter on a 98" diagonal screen and only on images that tend to cause pixel jitter. Most people probably won't notice any jitter at all if they're not looking for it, even on similar images.

Also a key issue for data screens is that both black on white and white on black text was crisp and readable at sizes as small as 7 points. Color balance was suitably neutral in all preset modes, including the brightest, which is unusual. Some colors were a little dark in terms of a hue-saturation-brightness model, making green and yellow a little dull rather than vibrant. However, colors were fully saturated and reasonably eye catching.

Few rainbow artifacts, particularly with data images. Every DLP projector I've ever tested shows rainbow artifacts, but the PG-LX2000 gets high marks for showing them less often than most. The only time I saw the artifacts in data screens was with one test image that's designed to make them show up. As is typical, the rainbows showed up more often with video, particularly in black and white clips and night scenes, but still far less often than most with most DLP projectors. Even those who see these artifacts easily are unlikely to see them often enough to find them annoying with either data screens or video.

Low running costs. DLP projectors help keep running costs down simply by not needing filter replacements. The PG-LX2000 lowers the cost further with a reasonably long lamp life, rated at 3,000 hours in Standard mode and 5,000 hours in Eco mode. Even better, when you need a new lamp, the replacement cost is just $149.

Surprisingly usable video quality. Given its 1024x768 native resolution, the PG-LX2000 has some obvious limits on its video quality. In particular, it has to scale any widescreen HD input to fit in the available pixels on the screen. Within those limits, however, it does surprisingly well.

In my tests, the projector didn't show any posterization and it showed only minor loss of shadow detail, even in scenes that tend to cause those problems. It also handled skin tones well and showed minimal noise in large solid areas. The relative lack of rainbow artifacts also helps, particularly for long sessions. The PG-LX2000 isn't a substitute for a home theater projector, but its video is watchable, making it suitable for classroom or business use.

Acceptably Bright with wide brightness range. I measured the projector in its brightest mode at 2557 lumens, or about 91% of its 2800 lumen rating. As a point of reference, that's easily bright enough for the 98" diagonal image I tested with to stand up to a typical level of ambient light in a conference room or classroom.

For lower levels of ambient light or smaller screen sizes, you can use any of four other color presets, which I measured at 791 to 1932 lumens. In addition, Eco mode drops the brightness by about 17%, to 2131 lumens in the brightest mode in my tests.

Good brightness uniformity. The measured brightness uniformity for the PG-LX2000 is a more than acceptable 72%. The difference across the screen is visible with a solid white image, with a slight sense of the bottom of the screen being a little brighter than the top (as confirmed by measurements). Break up the screen with text or graphics, however, and it's impossible to see any variation in brightness.

Slightly better than minimal connectivity. The connection options on the PG-LX2000 are best described as minimalist, if not actually minimal. The only choices for connecting image sources are the HDMI port for a computer or video source, a single VGA port for a computer or component video, and a composite video port. The only additional connectors are a set of phono plugs for stereo audio input and an RS-232 port for controlling the projector from a computer or third-party controller.

Notable for its absence is an audio output. If you want to use an external sound system, you need to bypass the projector, which means you won't be able to automatically switch the audio source along with the image source

Limited 3D. The PG-LX2000 can support 3D over both analog and digital connections, but it's limited to working with computers with a quad buffered graphics card, at 800x600 and 1024x768 resolution. As a practical matter, however, the more important limitation, as with most 3D-capable data projectors, is that you have to buy enough pairs of DLP-Link glasses for your audience. Prices are slowly falling, but the glasses are still $70 or more each in most cases. For a $550 projector, that means spending more on just 8 pairs of glasses than on the projector itself.

Low-quality, low-volume audio. As with the sound systems in most light-weight projectors, the PG-LX2000's audio isn't very useful. The 2 watt mono speaker suffers from enough of a bottom-of-the-barrel echo effect to make the quality no better than fair, and it's not loud enough to fill even a small conference room or classroom. If you need audio, plan on using an external sound system.

Also hurting the projector on this score is the relatively loud fan noise, rated at 37 dB in Normal mode and 32 dB in Eco mode. In my tests, the fan was loudest right after turning on the projector, and then quieted down a bit. Even after it quieted down, however, I found it loud enough to make it hard to ignore from three feet away when looking at data images. When I added sound for my video tests, the noise didn't get any louder, but it went from noticeable to annoying. Even if you're not sensitive to fan noise, you may consider this a problem.

Although the fan noise may be an issue for those who are sensitive to noise, particularly if they have to sit near the projector, the PG-LX2000 scores well on most basics, including the core features that matter most.

The projector delivers excellent data image quality, better than average video quality for the 1024x768 native resolution, and reasonably high brightness, along with settings that will let you adjust the brightness for different lighting conditions and image sizes. It's a little stingy on connectors, but it has all the ports you need, and the HDMI port takes it a little beyond the absolute minimum.

Also helping is that the PG-LX2000 is not only cheap to buy, but it keeps the total cost of ownership down with a reasonably long lamp life and a low cost for replacement lamps. With all this working for the projector, there's a lot here to like. And it adds up to making the Sharp PG-LX2000 a more than reasonable choice, particularly if you're on a tight budget.

For more detailed specifications and connections, check out our Sharp PG-LX2000 projector page.