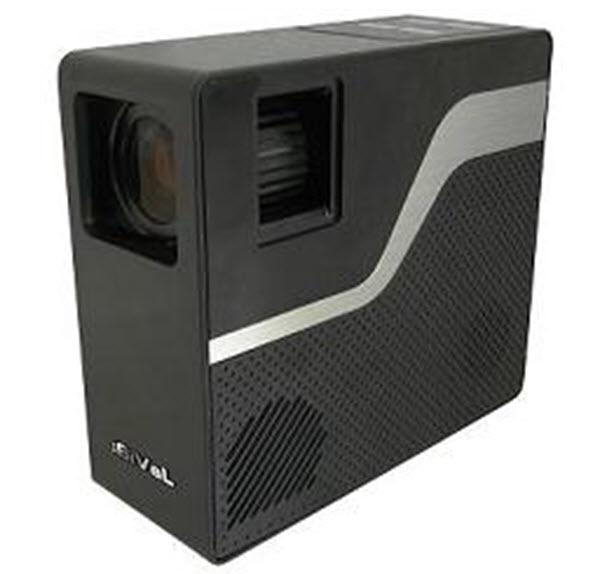 If you're a gamer or a movie buff, if you want a projector that is small and inexpensive, and if you can control the ambient light in your viewing area, you should take a look at the only projector under two pounds that offers 1280 x 768 native resolution . . . SiVal's new MP720B1. Rated at 60 ANSI lumens with a 200:1 contrast ratio, it is not meant for large or bright rooms, but a 720p HD source maps nearly 1:1 onto its LCoS chip so you won't have to contend with the large horizontal black bars seen on SVGA and XGA projectors when connected to HD sources. With an LED lamp life of 30,000 hours and a manufacturer's Web-discounted price of $499.99, the MP720B1 sets a new standard for what is probably best described as a "miniprojector" . . . not battery-powered like pico projectors, but lighter and smaller than low-end SVGA and XGA portable projectors.

The MP720B1 is a personal projector. It cannot manage "hallway conferences" like a battery-powered pico projector, and at 60 lumens, it is limited to small conference room presentations for just a few people where a smaller image size is acceptable. Its real niche is in bedrooms, dens, and hotel rooms where high ambient light is not an issue and the AC outlet is nearby. It even comes with a snap-on mirror that deflects the image upward so you can watch movies on the ceiling if fully reclined is your favorite viewing posture. There are a few items that limit performance, but in general, this new class of projector represents a nice step forward for personal projection applications.

Operating Modes: There are three Preset modes for the MP720B1 . . . Vivid, Standard, and Movie. They each have slight color and brightness variations, but they are very similar, so choosing any of them will not affect the image much. Brightness, contrast, color, and tint controls (brightness and contrast only for PC inputs) are inactive in any Preset mode, so if you need to make image adjustments, you will have to head for the User mode which allows you to store favorite image settings. Just be aware that when color temperature is set to Data mode, no image adjustments can be made in User mode.

Image Quality: Despite the image adjustment limitations noted when color temperature is set to Data mode, the video image in that mode is quite good. The MP720B1's low contrast ratio of 200:1 limits dynamic range, but skin tones look natural and color saturation is good. This is not a home theater projector, but for the gaming environment and for casual movie watching, it is more than adequate.

Audio Quality: Unlike most small projectors, the audio quality is pretty good for personal use, and when you are on the road, external amplification is not usually convenient. However, if the MP720B1 is settled in your bedroom or den, an external amplifier and speakers adds a lot to your gaming or movie enjoyment.

Compatibility: The MP720B1 accommodates computer resolutions from VGA to UXGA and HD video from 480i to 1080p. Composite and component video signals displayed flawlessly, but our sample unit had some difficulty syncing at 720p and 1080p in HDMI mode although the 480i signal displayed correctly (SiVal attributes this problem to our test unit and says that it is not representative of production units).

Image Size and Position: For a 72" image, the centerline of the lens is at the bottom of the image, and the projector is about 10 feet from the screen. This throw ratio works well for all but the smallest of rooms. There are no adjustable feet on the MP720B1, so you need a level surface to avoid horizontal keystoning, but the projector base is threaded for a tripod so there are other leveling options.

Projector Control Panel: The MP720B1 employs touch-sensitive function buttons across the top of its case. Touch sensitivity makes it possible to inadvertently make an unplanned function selection, but using the remote control solves this potential annoyance.

Connections: Unlike pico projectors, the MP720B1 has a complement of full-size connectors on its rear panel, so no cable adapters are needed. A D-sub connector handles computer input or composite video, an RCA jack connects composite video, and there is an HDMI connector for digital signals. Rounding out the array is a USB connector for connection to USB drives (e.g., memory sticks) containing .JPEG images. This is one of the more complete connection layouts we've seen in a small, inexpensive projector.

Digital Input: The MP720B1 is the only projector in the sub-100 lumen class that has a digital input. Its HDMI connection handles DVD players, Macs, and game stations and provides the visual clarity that only a digital signal can.

Quick Start/Stop: Because the LED illumination requires no warm-up and generates very little heat, pushing the power button will turn on or turn off the MP720B1 in about one second. If you have ever waited the one or two minutes it takes to start up and shut down many conventional projectors, you will appreciate this timesaving feature.

Auto Keystone Correction: While many projectors provide manual vertical keystone correction to eliminate image distortion when tilting the projector, the MP720B1 goes them one better by automatically adjusting the image if keystoning occurs. If you prefer manual keystone correction, you can disable the automatic feature and make up to a Â±15Â° vertical keystone adjustment from the menu or directly from the remote control keypad.

Lamp Life: LEDs cannot yet match the brightness levels of standard projector lamps, but they compensate by providing lamp life such as the MP720B1's 30,000 hour rating. That means that you can count on usage of five hours per day for seven days a week, and you will still be using the original LEDs after 16 years of operation. Chances are high that you will replace your MP720B1 long before you will have to think about replacing its LEDs.

Brightness Uniformity: One of the benefits of LED illumination is the elimination of "hot spots" that typically plague most projector lamps. Uniformity numbers like 60-70% are not uncommon for traditional lamps, but the MP720B1 checks in with an astonishing 94%. That translates into the most evenly lit image you are likely to encounter, and the effect is definitely noticeable in monochromatic images (primarily one color, high white content, etc.).

Fan Noise: Fan noise level is low enough that it will not bother you even if you are seated next to the projector. Also, the heat exhausted by the fan is so low that it is almost undetectable an inch from the exhaust port.

Maintenance: Like DLP projectors, the MP720B1's LCOS chip is sealed so no air filters are required. When you add the long life of the LED illumination, it is safe to describe this projector as maintenance-free. An occasional vacuuming of the air intake port is always a good idea to keep and dust or debris from accumulating.

On-Screen Menus: The large on-screen menus have no options for screen placement or opacity. In addition, they don't collapse to a single line when making brightness, contrast, and other adjustments. The net is that you may find yourself backing in and out of the menu to get an adjustment right.

Rainbow Effect: Those intermittent RGB stripes that some viewers see on low-speed color wheel DLP projectors are present on the MP720B1 as well, but they are caused by a different component. Since this is an LCoS projector, there is no need for a color wheel, but the LCoS chip itself has a relatively low refresh rate. The three RGB LEDs are fast enough to avoid rainbow effects, but the LCoS chip is not, so you may see bits of color where you do not expect them in fast-panning video scenes when your eyes tend to dart around the image.

Placement Flexibility: Like most small projectors, the MP720B1 has no zoom lens, so image size is directly proportional to projection distance. The upshot is that if you need to project a particular image diagonal, you have no flexibility in projector placement. There is only one projection distance for a particular image diagonal, and you will have to live with it.

Remote Control: While its layout is simple and easy to use, the remote is limited to a small angle of response from its rear-mounted infrared receiver. Since there is no front-mounted IR receiver, you will have to be directly behind the projector to make adjustments with the remote control.

SiVal has taken a positive step toward small, light, high-resolution projectors for the gaming and personal entertainment markets. Already a 720p native mode projector, the MD720B1 kicks brightness up a notch from most pico projectors, and it seems likely that we will see a native 1080p miniprojector before too long. While there are a few features that could use upgrading, at a discounted price of less than $500, the MP720B1 breaks new ground in terms of brightness and resolution and sets the bar a little higher in its class. If you are looking for a unique solution for personal entertainment, the MP720B1 should be on your short list.


For more detailed specifications and connections, check out our SiVal MP720B1 projector page.

Comments (2) Post a Comment
Nabi Posted Nov 30, 2010 1:43 PM PST
I wonder if the Acer K11, available for under $400, isn't a better deal. True, it's only an 8 by 6, but it doesn't have the image problems that come with the SiVal (undermining the advantage of 720p.) It also throws 200 lumens and has automatic keystoning etc. and produces a pretty pure picture for a mini portable.
benhur Posted Dec 23, 2010 11:11 PM PST
The Acer K11 4:3 aspect ratio and it's native 800x600 resolution make it totally obsolete by today's standards. Practically all movies and gaming platforms (PC, xBOx360, PS3)is presented in native wide-screen aspect ratio and HD resolution. While the iSival is far from perfect, it does at least get those two critical things right to make it a good projector.