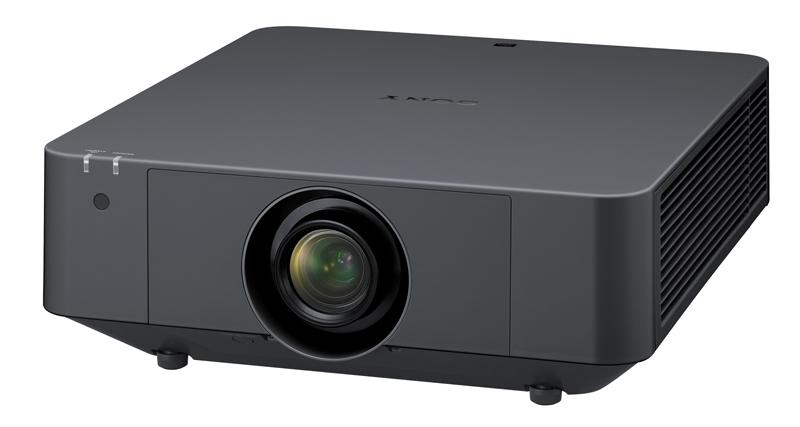 Sony has been in the 3LCD laser projector space for more than six years, and their latest offering, the VPL-FHZ75, advances the state-of-the-art with new menu selections that customize the image for the projection environment. This new "Intelligent Setting" function provides selections for classrooms, museums, and entertainment venues that modify projection elements such as brightness, contrast, color balance, and fan noise to give an image its best look for that environment while providing better control over operating costs. The changes among the settings are subtle, but we found them effective in matching the viewing experience to the surroundings.

Most 6,500-lumen projectors are larger and heavier than the VPL-FHZ75, and that difference will be most appreciated when ceiling mounting this projector. Once mounted, the VPL-FHZ75 gives the installer the most extensive toolbox of image positioning and adjustment options I've seen. Of particular interest is the very wide range of motorized lens shift capabilities: -5% to +70% vertically and Â±32% horizontally. Add in a 1.6x motorized zoom lens, and getting the image centered on the screen is assured even with substantial mounting errors.

The VPL-FHZ75's list price of $11,000 is reasonably competitive with current laser projector offerings in its 6,500-7,000 lumen class, and it boasts superb image quality. In fact, I found the video picture to be evenly saturated with excellent rendering of flesh tones. Highlights and shadows looked natural, and data images were similarly engaging. These characteristics makes the VPL-FHZ75 an excellent choice for conference rooms, museums, houses of worship, higher-ed classrooms, photo clubs, and other large venues where viewers demand a bright, high-resolution, and color-accurate image. 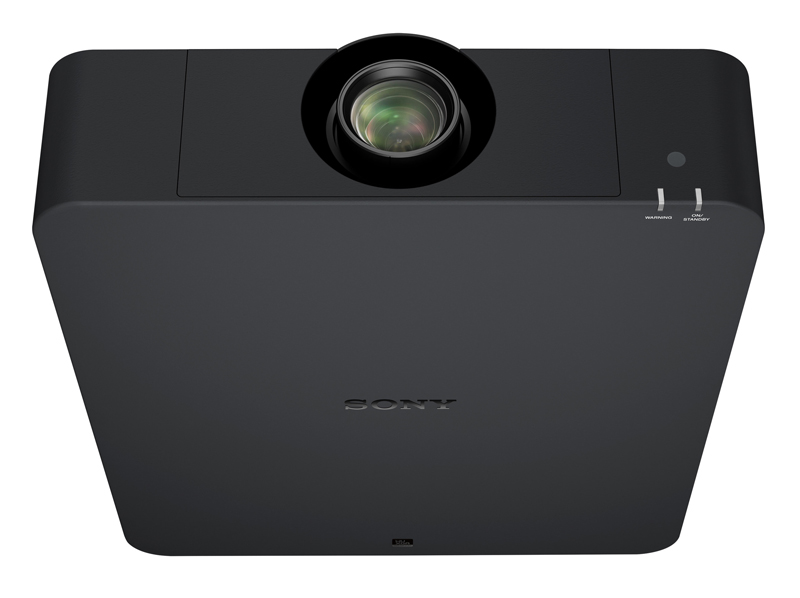 The VPL-FHZ75 came out of the box with a gorgeous video image in Standard mode. Dynamic mode had slightly higher contrast, but there was a pale blue tint to the image, and Brightness Optimized mode had the usual green tint associated with the highest brightness setting on most projectors. Colors were well balanced, and proper saturation was evident across the entire image. With a slight boost in contrast and a corresponding reduction in brightness, shadow detail was enhanced, and highlights were rendered with precision. Flesh tones looked natural, and as with all 3LCD projectors, there were no rainbow artifacts that sometimes plague DLP projectors with a color wheel. In addition, background figures and scenery had more definition than many other projectors in this class.

To judge the effect of the Intelligent Setting control, we varied the viewing environment by opening/closing shades, turning on interior lights, and varying background noise. Switching between the four Location choices (Meeting/Classroom, Museum, Entertainment, and Multi-screen) produced surprisingly effective changes in the VPL-FHZ75's brightness, Eco modes, fan noise, and other parameters. These were not dramatic variations, but they were detectable with each change, and they definitely customized the viewing experience with the simple touch of a menu item. They should provide a good starting point—if not end point—for installers performing setup in these environments.

Data projections looked best in Dynamic mode with good resolution of small fonts, even at full keystone correction. The image showed no digital artifacts and was sharp from edge-to-edge with plenty of pop. Even architectural drawings were clear and crisp thanks to the remarkably fine inter-pixel gaps of the VPL-FHZ75's LCD panels.

Sony's Reality Creation scaling and noise reduction technology, originally developed for its consumer TV displays, is well regarded for its ability to tune less-than-ideal content. With an old and noisy VHS tape playing as the source, I engaged Reality Creation and the effect on noise reduction was immediate and effective. It was also easy to sharpen the image using the Resolution slider. It may not have turned that old VHS recording into a DVD equivalent, but it did noticeably improve the quality of the image.

The dual-screen projection option was particularly effective because, unlike many projections with picture-in-picture capabilities, the VPL-FHZ75 allocated equal screen space to both images, one from a video source and the other from a computer. I ran a visual tour of museum paintings on half the screen with notes about each painting scrolling on the other half. Both images were large enough and sharp enough to ensure satisfying visibility.

Fortunately, you mostly deal with VPL-FHZ75's menus and remote control during initial installation and setup. The menus are relatively complex, but can be navigated fairly easily since they are generally segregated by function. Some care is needed with the nested menus, but these are limited in number, and the good news is that menus stay on-screen longer than usual and allow extra time to navigate. The full-sized remote, meanwhile, offers a lot of one-button selections to get to key settings, but still offers up a cluttered array that is sometimes cumbersome to deal with. It's also tougher to use the remote in a darkened room since it has no backlight.

Naturally, the installer will do his/her best to get the VPL-FHZ75 mounted so that its image is matched to the screen position, but errors are inevitable. Since ceiling mounting is likely for this class of projector, mounting errors can be problematic without the convenience of powered controls such as zoom, focus, and lens shift. This is where the VPL-FHZ75 separates itself from some competitors with manual lens controls. Along with a long zoom ratio (1.6x), this projector has the widest range of lens shift we have ever encountered. Horizontal shift is Â±32%, and vertical shift ranges from -5% to +70%, which just about guarantees perfect image alignment.

Be aware, though, that there is a modest impact on image brightness as you move the image from its center position. For our sample, full horizontal shift decreased brightness by -10%, and full vertical shift resulted in a -16% decline. These are not earth-shaking percentages, but it is worth noting that there is a small cost to pay for extreme lens shifting.

The VPL-FHZ75's zoom can compensate for variations in the required throw distance, but like lens shift, using the full zoom setting reduces brightness to some extent. Our sample unit dropped brightness by -17% transiting from full wide to full telephoto, which is better than we usually see in 1.6x zoom lens.

Having an Eco power setting to reduce illumination intensity is not unusual, but having two Eco settings is out of the ordinary. Labeled Middle and Extended, these modes reduce brightness by -21% and -85%, respectively.

The VPL-FHZ75 has a full complement of networking options that allow controlling the projector from a Web browser or a computer using any of several control protocols. Reports can be generated via e-mail, and Crestron compatibility is provided. 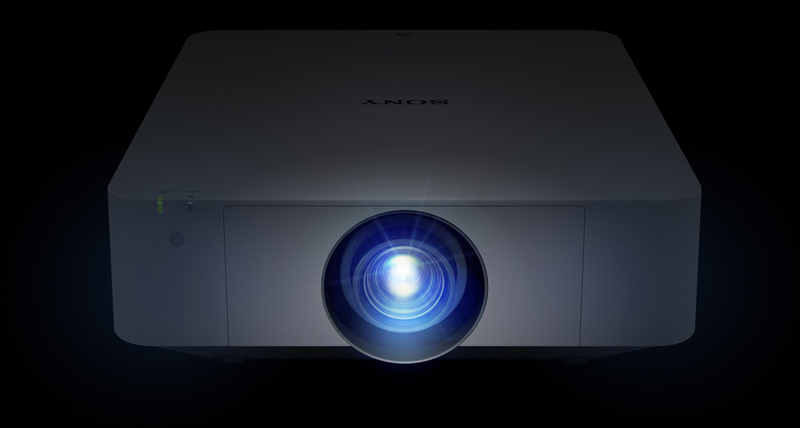 Sony has raised the bar for medium-sized venue projectors with the introduction of the VPL-FHZ75. With a small footprint and a weight of only 35 pounds, this WUXGA 3LCD projector puts up a bright 6,500-lumen image that can be adapted to its surroundings at the touch of a button. Video quality is excellent, and data presentations really jump off the screen.

Customization of the projected image via Sony's Intelligent Setting is a step forward. Setting up in different venues like museums or classrooms can be a cumbersome process, but the VPL-FHZ75 makes short work of it. And if the source material is a few generations old, the Reality Creation section of the Projection Setting menu can clean it up.

If you have a big room that needs a bright, small data/video projector with a feature set better than most, Sony's VPL-FHZ75 should be on your short list. And if you can get by with 5,500 lumens, Sony has also introduced the lower-cost VPL-FHZ70 with otherwise similar specifications and a list price of $9,000.

Connections. The connection panel on the VPL-FHZ75 is located on the projector's side panel and features inverted labeling in anticipation of a ceiling mount. Among the unusual options are pass-through output connections for both VGA and DVI monitors.

Brightness Uniformity. Uniformity was better than average at 86%. The lower portion of the image was slightly brighter than the upper portion, but this difference was undetectable in any video mode. No hot spots were detectable in any projection mode.

Image Size and Offset. With the center of the projected image just above the centerline of its lens, the VPL-FHZ75 is well-designed for ceiling or low shelf mounting, although its wide vertical lens shift range accommodates virtually any mounting location. A 150-inch image can be projected from 14 feet, 7 inches to 23 feet, 9 inches from the screen thanks to the 1.6x zoom lens.

Heat and Fan Noise. Heat is exhausted on the right side, and fan noise is quite low for such a bright projector. Even in high altitude mode (recommended above 5000 feet), the fan noise is not distracting.

Input Lag. Input lag as measured with a 1080p Bodnar lag meter was 45.8 ms. That is low enough for some simulations but won't satisfy serious gamers.

For more detailed specifications and connections, check out our Sony VPL-FHZ75W projector page.

Comments (1) Post a Comment
Sunita Posted Jul 13, 2019 11:22 PM PST
Good detailed review and rightly said the price of $11000 is super competitive. I am not sure whether this is available in India as yet.