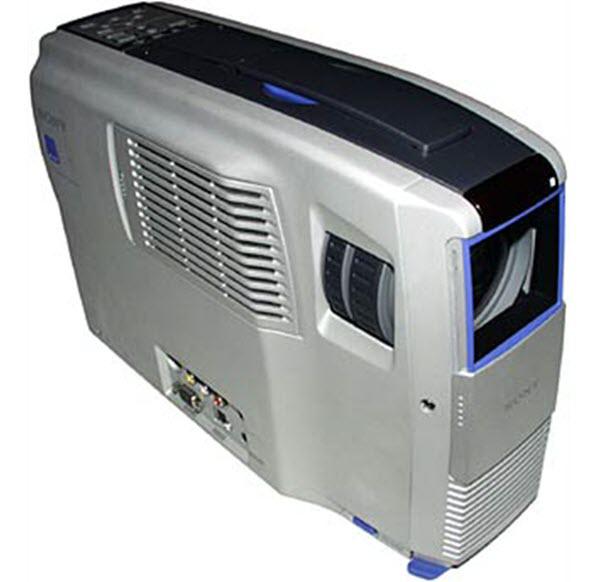 The vpl-px1 projector was my first projector ever, so knowing this please understand that the scores above are made from comparisons of my old crt rear projection tv and not other projectors that exist today. IMAGE QUALITY: The image quality on this projector is very sharp when focused just right. along with the 1,000 lumens and 3x zoom lense this projector can also throw a large but crisp image onto the screen. the largest i've seen it run so far is about 1560 inch's on my living room wall which has a large high ceiling, this almost produced a theater exactly (in comparison of the seats we choose in a theater). Now, the bad thing is that this projector does not deal well with signals that are higher than its native 1024x768, but 1024x768 should be high enough that any higher would not be needed in almost all cases. However the px1 does handle lower resolutions better, if you need to hookup some video device through s-video you will get an image that is soft (because of the upscaling) but highly tolerable, if you have a lower resolution device hooked up through vga or component you will get higher color representation but still the soft look. Now the slight killer here is the contrast, since this is a business class projector it may have ok contrast but it will not have very good shadow detail in dark scenes. However after getting access to the service menu and various other adjustments i've found a happy medium that gives me good contrast and good shadow detail. FEATURES: Since the vpl-px1 projector is ment as a business class projector it does lack some of the inputs that a home theater projector would have. however you can hookup component video through an adapter if you wish, along with this it supports vga, s-video and composite video. Some of the features thta i consider a must have been hidden (like the lamp counter), however this can be shown by using the key copmbination to get into the service menu. CONSTRUCTION: When this projector was first shipped to me it was not working when it arrived. However this was not an error in the shipping but rather a lack of excellent contruction. The main ciruit board that the lcd's plug into has a nasty habit of easily being knocked out of place (which you cna read about more in the problems encountered). now i was able to fix it after ti was shipped to me but the same thing happened again... read problems encountered. however other than this slight problem the thing is quite portable and solid as a rock. EASE OF USE: its very easy to use! the main thing about the vpl-px1 is that it was made to be portable and quick to setup. RELIABILITY: other than the slight contruction problem its rock solid and very reliable. it never has any odd quarks or anything of that nature, very reliable. VALUE FOR MONEY: it depends on how much you pay for it really. since they are no longer in production it is up to where you buy it from if it is worth the money. however i got it cheap, if you're thinking about buying the px1, it is a good projector but keep in mind there are better projectors out there that are pretty cheap too.

Any Problems: Projector had fell on its side and poppedout the main circuitboard that the lcd's plugged into. This caused the thin plastic ribbon cable to be ripped on the blue lcd. However i was able to find a unit on ebay that was broken and selling for cheap. i bought this and replaced the lcd block, now the image quality is even better than before.

Bought mine used for $500+tax some 2,5 year ago and has used it mostly for DVDÂ´and some laptop since then, work just fine, steady as a rock. Somewhat noicy compared with models today. Strange, the lamp still haven't warned for halftime up :-)

Any Problems: Well I can't find any mechanical on/off switch, so its always on standby until you pull the plug when you are to move it.

I purchase this projector for home theatre use and am very pleased with my purchase. It is bright enough to still watch with the lights on. The picture quality is brilliant, especially when watching DVD's or when connected to my computer.

I am a really Fan of Sony. This beamer is a very positive experience to me, again !