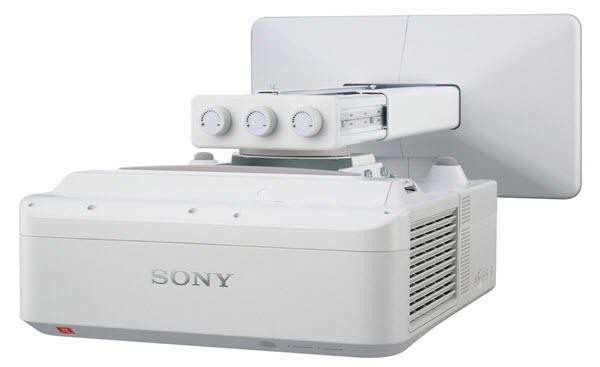 With a first place ranking for data image quality and second place for other major categories, including tying for second brightest in interactive mode, the Sony VPL-SW535C is an easy pick for second place in our Interactive Projector Shootout. If you plan to move it around on a cart, however, or change resolution very often, it may plummet to last place for your purposes, with its manual 49-point calibration.

Data image quality. The Sony SW535C earns first place for data image quality with a combination of excellent color quality and crisp detail. Like the Epson 485Wi, which is also built around a 1280x800 LCD engine, and unlike any of the DLP projectors, it delivers vibrant, saturated colors in all modes. As with the 485Wi also, there's no possibility of showing rainbow artifacts, which is always a potential issue for single-chip DLP projectors.

Interactive features. As with the Epson projector, and unlike the DLP projectors, the SW535C pen has to touch the screen to work, so you can't use it from a distance or with a screen that lacks a hard backing. What earns the projector its low ranking for interactive features, however, is primarily that it's the only one in this shootout that needs manual calibration. Any time you move the projector or change resolution, you have to recalibrate by touching 49 points on screen with the pen. This is a tedious procedure that none of the competing models are encumbered with.

Very much on the plus side, there's no lag between moving the pen and seeing the result on screen. Also worth mention is that the SW535C comes with two pens and lets you use both at once. However the feature didn't work as smoothly as Epson's equivalent. When we tried dual pen mode, the pens would occasionally stop working, as if we had overwhelmed the bandwidth, and would then pick up again after a short pause. We even managed to crash the program once, and had to close it and restart it to get the interactive feature to work again.

Video image quality. Despite coming in first for data image quality, the SW535C comes in second to the Epson 485Wi for video quality. Between the two in their Presentation modes, the SW535C handled shadow detail better, with better contrast for dark levels, and it offered a more neutral black. However, color was a bit less saturated, a bit less accurate, and skin tones a bit less natural. When both projectors were switched into their best preset modes for optimal video, the differences in video quality were similar, although not as pronounced. Both projectors delivered far better color than any of the DLP models.

Installation and maintenance. The Sony SW535C is relatively easy to install, with separate adjustments for roll, pitch, and yaw, plus minor amounts of both vertical and horizontal lens shift and zoom (at 1.05x) for fine tuning image position and size. It also offers relatively low maintenance, with a lamp life of 3000 hours in High Brightness mode, 4500 hours in Standard mode, and 6000 hours in Eco mode. However, you have to clean the filter when you change lamps, and you have to remove and replace screws.

Audio. If you need audio, plan on using an external audio system. Although the SW535C offers reasonably good sound quality, the volume is too low to be useful even in a small room. That's enough to land the projector in last place for audio in this shootout.

Brightness. On our tests, the SW535C came in at 2650 lumens in its brightest preset mode, or about 92% of its 3000 lumen rating. It measured 981 to 1358 lumens with its other presets. Looking at only the brightest measurements for each projector, that makes the SW535C a touch less bright than either the Epson 485Wi, at 2841 lumens, or the Dell S500wi, at 2772 lumens. In real world use, however, it will more often be the second brightest in the group, behind only the 485Wi, because all of the DLP projectors have a separate interactive mode that lowers the brightness by at least a little.

Connections. The SW535C offers all the connectors you're likely to need.

The Sony VPL-SW535C's manual calibration makes it the wrong choice if you plan to move the projector around on a cart or have multiple presenters with their own computers and assorted resolutions. It's also the wrong choice if you need features that you'll find only in DLP projectors, like the ability to interact without touching the screen. If none of these issues apply, however, the excellent data image quality and the high scores for video quality and brightness easily make the SW535C worth considering.

It helps also that the relatively high price, at $2099 estimated street, or $1949 as the suggested education price, is offset somewhat with a long lamp life that can help lower the total cost of ownership. All this together makes the Sony VPL-SW535C a potentially attractive choice, particularly if you value data image quality above all else.

For more detailed specifications and connections, check out our Sony VPLSW535C projector page.