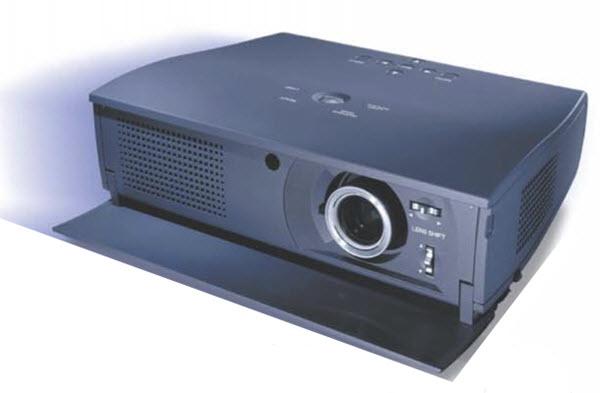 The projector works great, but I have had multiple issues and the studio exp. team at Boxlight (the parent company) has been slow and unresponsive. The projector arrived at their test facility 19 days ago and still no resolution! They claim to have high quality projectors, but their warrenty work queue is so long they can't keep up their service agreement! I wouldn't recommend this company to anyone. There are several other projectors in this price range that would most likely have better quality.

Any Problems: 1--early burnt lamp (after less than 200 hrs.) 2--shutdown issue (lamp would shut itself with increasing frequency) 3--dim lamp (possibly related to previous issue since they both happened at the same time)

I realize that this projector has been out for a year and a half now. I looked at the competition; Epson Home 10, Hitachi Home-1, Infocus 4805, Optima H30. I had to eliminate the 4805 and H30 because I suffered headaches and the wife saw rainbows. That left me with the Home 10 and Home-1 to compare too. The price of the 1HD was a couple of hundred bucks below the Home 10 and several hundred less than the Home-1. Picture wise they are pretty close when comparing apples to apples. What sets the 1HD aprt is the way it displays through a HTPC. You can set the image 1:1 with Powerstrip, something you cannot do with the Epson or Hitachi. HDTV is also superior with the 1HD as this pj's resolution is exactly 1/4 HD. It scales superbly at one half where the Epsom and Hitachi have more to do in their scaling.

Any Problems: Now for some of the rough areas of the 1HD, and please keep in mind for less than $1200 these criticisms are very slight. Screen Door Effect. This is the effect named because it is similar to looking through a screen door. LCD pixels do not meet edge to edge with adjacent pixels and thus there is a black space between them. General rule of thumb is to sit 1.5 times the screen width back. I was sitting 16' back or about 1.8 times the screen width. Even at this distance, the 1/4 HD (964x578) panels did make for visible SDE if one was looking for it. An ever so slight defocusing of the lens made it disappear completely without losing any sharpness of the image. But be careful, too much and you'll soften the picture to the point it looks bad. Once again, my use of a 119" screen is on the edge of being too much for a project of this resolution to handle, after all it really wasn't intended for such very large screens. But I knew in 8mos I would upgrade, so I went for a future proof screen. Black levels. Depending on the video source, the BL are sometimes "crushed". By that I mean some of the subtle detail in shadows tends to lack enough gradation as to be muddled. This was mainly a problem with composite TV and SDTV. The HCCV screen did help a lot with the black levels and even at 119" screen size, I would still recommend this screen type for this projector. HDTV. I'm using a feed from Time Warner cable, which only nets me ABC and HBO for the time being. With the auto component video signal detection, the 1HD had a very hard time locking onto these signals correctly. Quite often I was getting only a grayscale image. Same problem when switch from DVD (component) to TV (s-video) and then back to DVD would confuse the 1HD to the point of being unable to lock onto the 480p signal from my dvd player. Taking the 1HD out of auto detect and forcing it to 480p resolved this problem. But HDTV will be another problem to solve, but that may have something to do with either the video switch on my Krell Showcase 7.1 preamp having a problem with HDTV component signals or the 25' component cable I'm using till I can afford to pick up a 30' Belden 1694a component cable. Burning smell. The 1HD and PLV-Z1 are notorious for having a burning smell when they are new. This is nothing alarming, just a by-product of burning in the bulb. I've had other pieces of home electronics do the same thing. And to be honest, the HCCV screen from Da-Lite has an odor far more overbearing than the projector. Once again, my negative issues were either self-faulted (component sync'ing issues) or very nit picky considering the phenomenal price of this unit. Also, note to people switching from 4:3 tv's to 16:9 units, remember to adjust the settings of your DVD player accordingly, otherwise things will look out of proportion.

I got this one for under 1500. i'm still working on my home theater seating area but screen, dvd, projector and sound are all ready done. ever since i hoked this one up and turned on i fall in love with results that i got. i think this was best investment in my home theater

Any Problems: no problems at all

I demo's this projector at Boxlight headquarters last winter. The new house is done and the theater is set up. I'm using a Da-Lite Cinema Contour with Cinemavision screen, Aperion Audio 5.1 (great speakers) in a 11 x 20 room. This projector is amazing for the money. I looked at Infocus Screenplay 110, Plus 3200, and the Matinee. By far, the boxlight's performance for the money is amazing. I can allow a great deal of ambient light watching dish network without losing a great deal of detail and color. I see no screendoor effect from the 84" screen at 15 feet back. Paid under $2800 for the screen, projector, ceiling mount, and boxlight even threw in a free dvd player. Anyone who buys a rear projector tv without exploring front projectors is nuts!

Any Problems: none so far.....had the system up and running for 3 weeks.

Like it better than watching the tube TV. Watch mostly Satellite and DVD.