Sony is expanding their laser projector collection with two new midrange models, the VPL-FHZ85 and VPL-FHZ80, which are—as of October 18, 2021—are said to be the smallest and lightest 3LCD interchangeable lens projectors with a light output of over 7,000 lumens. They're designed for use in classroom, business, museum exhibit, house of worship, and e-sport installations.

The two models are virtually identical, with the primary difference being the light output of their Sony Z-Phosphor laser diode light source—rated at 7,300 lumens for the FHZ85 and 6,000 lumens for the FHZ80. The light source is rated to last up to 20,000 hours in Standard mode (30,000 in Middle mode) before reaching half brightness. Standard mode produces equal color brightness, but that drops to 80% of white in Middle mode on both models (5,840 lumens on the FHZ85 and 4,800 lumens on the FHZ80). Sony lists their contrast ratio as 8:1. The other differences are related to the difference in light source and show up in acoustic noise (38 dB vs 36 dB), max power consumption (506 W vs 397 W), and weight (29 pounds vs 28 pounds). The projectors use three 0.76-inch LCD panels and can project an image up to a 600-inch diagonal with a native resolution of 1920x1200 (WUXGA), but they are capable of accepting signals up to UHD 4K (3840x2160) and even full-frame DCI 4K (4096x2160), both up to 60 Hz. To improve detail further, the projectors draw on decades of Sony knowledge and development by incorporating Reality Creation, both with the new Reality Text feature that improves the display of text for presentations, and with their Reality Creation engine found on their home theater projectors that calls on a vast database of images to improve image clarity. 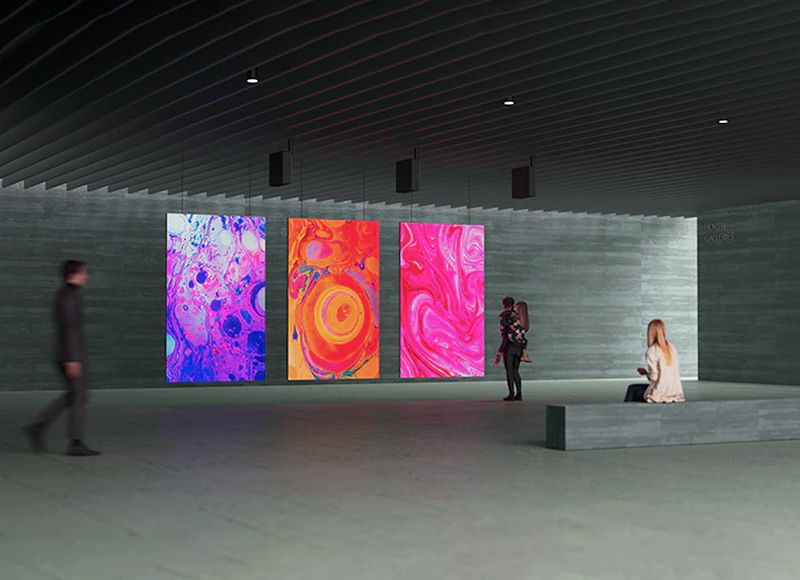 Installation is flexible thanks to the ability to install the projectors in any orientation and a vertical lens shift range of -5 to +70% (horizontal shift is Â±32%). As mentioned, the projectors are also small for their class, measuring 6.75 x 18.13 x 19.5 inches (HWD) and weighing 28 (FHZ80) or 29 (FHZ85) pounds. The standard lens has a throw ratio of 1.39-2.23:1 (you can check throw distances on the ProjectorCentral Sony VPL-FHZ85 Projection Throw Calculator), but there are six different interchangeable lenses available that offer throw ratios from 0.33:1 up to 3.18-4.84:1.

There's a large selection of connections on the back (with labels thoughtfully written upside down for easy reading, considering the high probability the projectors will be ceiling mounted). Included video connections are a RGB Mini D-sub 15-pin in and out, DVI in and out (that shares the stereo mini jack audio connector with the RGB in/out), HDMI in, and HDBaseT. There's also a separate Ethernet port, RS-232 for control, a stereo jack for Sony's Control S IR interface, and two USB for power and firmware updates.

The Sony VPL-FHZ80 and VPL-FHZ85 are expected to be available January 2022 in both white and black with pricing available at a later date.

For more detailed specifications and connections, check out our Sony VPL-FHZ85W projector page.