Epson announced today that it has reached a settlement in its legal action against the VAVA brand and its parent Sunvalleytek International Inc. claiming that the manufacturer had inflated the brightness specification of its popular VA-LT002 4K UST laser projector, widely promoted as the VAVA 4K Laser TV.

According to Epson's statement, "Under the terms of the settlement, Vava agreed to correct quoted lumens from the previously misstated 6,000 or 2,500 lumens to 1,800 lumens across varying online and in-store retail venues, reflecting more accurate brightness claims to benefit consumers." As previously reported, Epson filed suit last spring as part of its ongoing, essentially solo, effort to combat misleading brightness claims in the consumer projector industry. At the time, Epson said that various online and retail outlets were advertising the VAVA 4K as having either 6,000 or 2,500 lumens, and that third-party testing verified that neither claim was accurate. Epson said that the projector's actual performance averages 1,869 lumens using the industry-standard ISO21118 measurement methodology. 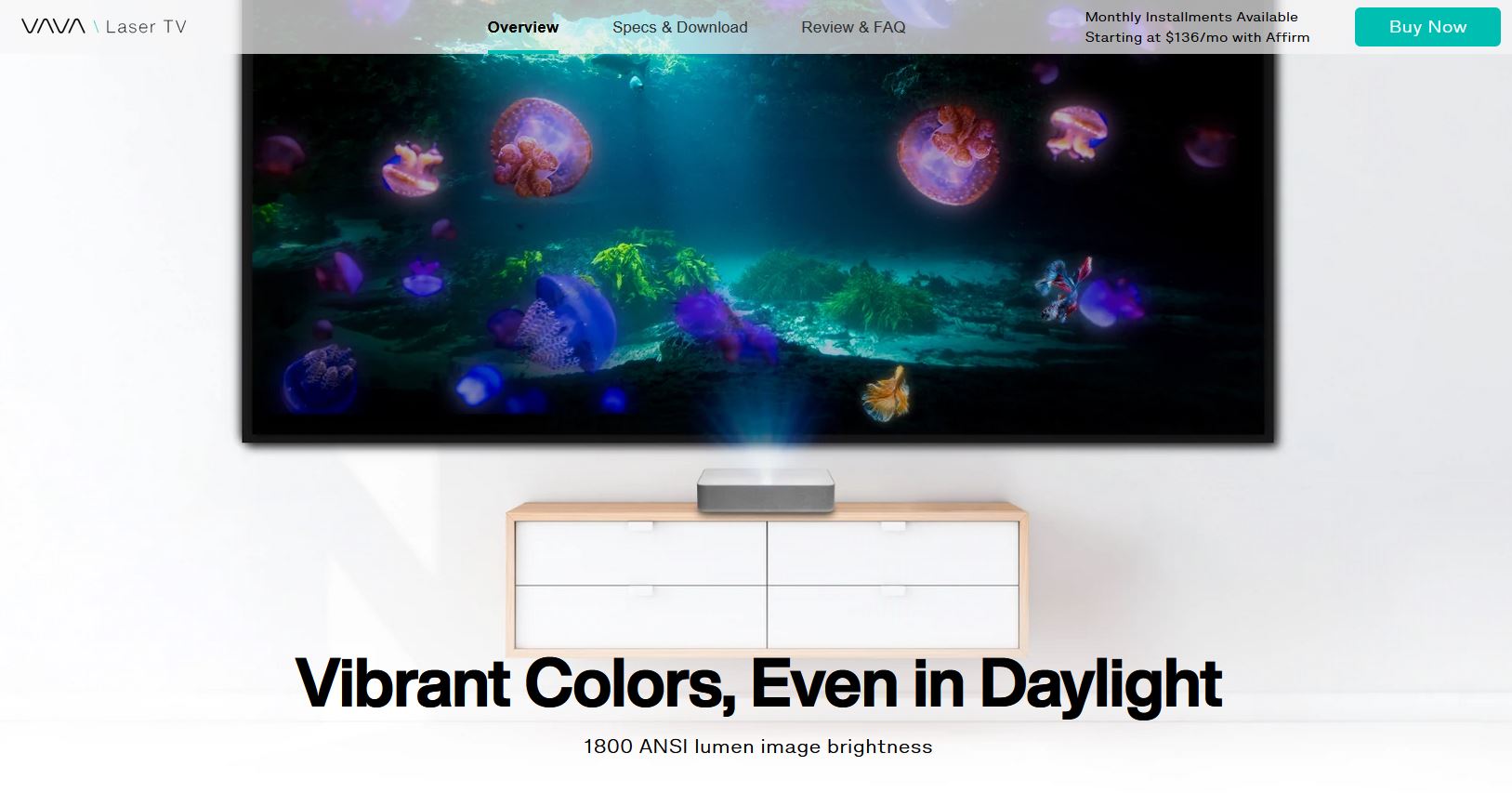 That 1,869 lumen figure is about 75% of VAVA's then-stated 2,500 ANSI lumen specification—less than what would be permitted by the 20% tolerance defined by the ISO21118 standard. ISO21118 measurements follow a similar technique as the still widely used ANSI spec, which averages brightness from 9 points across the image, but ISO specs are sometimes used interchangably with the better-known ANSI in marketing materials. A key difference, however, is that the ISO spec is based on a larger sample of units taken from ongoing production, which can lead to differences with an ANSI reading taken from a single working sample.

The 6,000 lumen figure, based on an unspecified measurement standard, appeared on VAVA's website alongside the claimed ANSI spec early in the projector's marketing and was eventually removed, though at the time Epson filed its suit, remnants of that were still said to be visible on the websites of third-party retailers.

Notably, the Epson settlement against VAVA appears to directly address only the basic VAVA 4K model and Epson's statement does not seem to include language suggesting a commitment to greater accuracy for future products, as some of Epson's prior settlements have done. Specifically, it does not cite the brand's three-laser Chroma model, which has yet to formally reach market and has been repeatedly campaigned and pre-sold on an online crowdfunding platform. That projector's cited specification remains at its originally published 2,500 ANSI lumens.

The VAVA legal action is one in a series filed by Epson going back to 2018 against various brands for making misleading brightness claims. ProjectorCentral has previously reported on actions taken against the RCA brand marketed by Curtis International Ltd. and Technicolor; the Vankyo, WiMiUS, GooDee, and Bomaker brands sold primarily on Amazon; and the Philips NeoPix brand. In those prior cases, the projectors in question were typically inexpensive portables which in some cases were promoted under non-descript and unqualified "lux" "LED Lumens," or "Lamp Brightness" specifications that are not cited under any established industry standard and provide no context for comparison with ANSI/ISO lumens. All of these cases resulted in reforms to the brands' marketing practices and in some cases the awarding of damages.

Epson's efforts on this front are intended to make a level playing field for all projector makers and protect everday consumers who may be attracted to a big brightness number without understanding the context with which those numbers were arrived at or even fabricated. This is similar to what the consumer hifi industry went through years ago when manufacturers used a variety of measurement methodologies to inflate amplifier specifications. The Federal Trade Commission eventually stepped in and forced a single industry standard in 1974, but the projector industry is unregulated with regard to either brightness or contrast specifications.

Nonetheless, most respected manufacturers voluntarily cite ANSI or ISO brightness specs for consumer projectors to allow easy comparison of products between brands. Sadly, even when they do, some manufacturers have been known to take advantage of the generous 20% tolerance in the ISO spec by specifying their products at something less than 20% higher than the projector's actual performance capabilities. In contrast, ProjectorCentral's tests of commercial projectors intended for business, schools, and other public venues virtually always reflect accurate ANSI/ISO specs.

The VAVA complaint is somewhat more significant than earlier Epson actions, in that it cites a popular and heavily marketed 4K UST laser projector that typically retails for $2,799, making it by far the most expensive product Epson has publicly targeted with its brightness policing efforts. Despite the VAVA's relatively high ticket, however, it remains one of the least-expensive models in its 4K-resolution laser UST product class and is a competitor to Epson's own laser-driven living room UST projectors, which are rated at 3,600 and 4,000 ISO lumens.

ProjectorCentral's own review measurement for the VAVA 4K came in slightly higher than the cited 2,500 ANSI lumens, but as noted in the review, it was conducted with a handheld luminance meter facing out from the screen and was subject to significant error due to the steep lens angle that prevents consistent measurements with such a device. In our April 2020 standalone review and a December 2020 comparison review, we found the VAVA 4K to be a solidly-built projector with good components and features, but with some notable flaws in its overall color balance and user interface. Although several other competitive projectors have brighter light engines, in our tests the VAVA was able to achieve reasonable brightness in moderate ambient light with up to a 100-inch image and was never cited for a lack of brightness in our reviews.

Comments (5) Post a Comment
RSR Posted Feb 10, 2022 2:15 PM PST
Thanks Epson for fighting this thankless fight. I am a huge fan of Epson projectors and will continue to support a company that believes in truth in advertising. When Epson says that 5050UB is 2600 lumens, you bet it delivers. Even their EF11, which I love, claims 1000 lumens, and it shows when you project an image with that tiny projector.
Rob Sabin, Editor Posted Feb 11, 2022 7:02 AM PST
RSR, from our catbird seat here looking at and measuring 35-40 projectors every year, I can verify what you say. Certainly, it would behoove Epson to make sure their own house was tidy before poking around for the skeletons in their competitor's closets, but it is the simple philosophy of this company to provide specs that their projectors honestly reach. Many other manufacturers, even some equally well established brands I won't mention here, have been known to either take advantage of what is an unconscionably generous 20% tolerance in the ISO21118 standard by publishing a "marketing spec" that is intentionally inflated by some number just under 20%...or to actually employ cheats that temporarily put the projector into a hyperdrive mode when it recognizes the 100% brightness, full white test pattern used for measuring brightness in the test lab. The end user pays for a brightness spec that they never see even though the projector will pass the test at the higher number. There's a lot more to the question of lumen specs and what you get for real on the screen with any given projector, but that's for another time.

Thanks for the comment. I really appreciate the work you do. I have been following this site for close to 20 years. I am one of those silent readers, who rarely comment. I remember Evan repeatedly saying how Epson was one of the few manufacturers with products that were close to their ANSI lumen claims. Obviously, these observations stuck with me and I have bought Epson 5050UBe, which is an amazing projector. So thank you for that.

In the end, we are just average joes that are reliant on experts like you guys at projector central. I have to say that over the years, your reviews have been fantastic and it is one of the few sources that I trust. Although, these days there is a profusion of paid reviews, YouTube is full of them. I personally don't trust most of them. A good example is the recent Samsung Freestyle projector, and I have a feeling that even your review was a bit soft on the product. Unfortunately, conflict of interest is an issue everywhere. And at least, I as a consumer, am always looking through to assess the integrity of the source. I am sure there are many other silent readers out there. Those are the people you will rarely hear from.

Keep up the good work and my best wishes to you.
Rob Sabin, Editor Posted Feb 15, 2022 11:57 AM PST
Thanks, RSR. You are correct that Samsung, through one of its affiliated agencies, placed many of those Freestyle projectors with YouTubers and other websites who stand to benefit financially by a positive review. We had that opportunity but turned it down as we always do in these situations, and Mark Henninger's very positive and incredibly thorough review was completely unpaid for and unbiased. That said, I do think it's safe to say he was wowed by the notion of using a projector for the wide variety of unexpected use-cases Samsung is promoting for the Freestyle, and that perhaps it could have been punished a bit more for its too-meager light output. We called that out very clearly, but the Freestyle remains a highly recommendable product for all the other reasons we said so.
Chirpie Posted Feb 17, 2022 5:41 PM PST
Happy to see it, but at the same time Epson has been no angel with their claimed contrast ratio numbers. I'd like that to be the next category that gets more scrutiny amongst projector manufacturers. (Still like Epson though.)