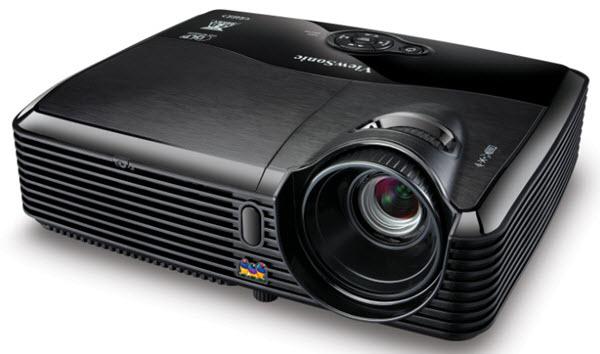 How you feel about the Viewsonic PJD5523w depends largely on the expectations you bring to it, so lets start by making sure you don't expect too much. ViewSonic's Web site overpromises when it says the projector is "perfect for use in corporate, education and home theater environments." That's asking a lot for a single projector, and if that's what you're expecting, you're bound to be disappointed. Tamp down your expectations, though, and you'll find plenty to like.

The PJD5523w's primary strengths are for business and education, where it can be an excellent fit at a more than reasonable $599. But don't expect as much from it as a home theater projector.

What the PJD5523w handles well is data images. In addition, it's light enough, at 5.7 pounds to take with you on business trips or move around by hand in a classroom or office. That adds up to making it a portable data projector. Small touches like zoom and focus rings that give sure control help make setup quick and easy. And the monitor out port is helpful for classroom use. Video image quality is acceptable for short clips, but not even in the ballpark of being good enough for home theater. Note too that the native 1280x800 resolution is a standard computer resolution, and well short of the 1080p you'd want for home theater.

This isn't to say that the PJD5523w doesn't offer some features that you'd expect for a home theater. It includes an HDMI port, it can accept 1080p input, and it's 3D ready for PC sources. However, it's built around a single-chip DLP engine, which makes it subject to rainbow artifacts (flashes of red-green-blue when light areas move on screen), which can be annoying to those who see the rainbows easily. And as with most DLP data projectors, the rainbows tend to show up far more often in video than in data images.

One other issue is that even with its least bright settings, the PJD5523w can be uncomfortably bright for theater dark lighting in home theater setups. However that same quality of high brightness, which ViewSonic rates at 2700 lumens and we measured at roughly 2300 lumens, is part of what makes it a good choice for business and education, where you'll generally want to leave the lights on.

Good data image quality. The PJD5223w's data image quality was easily good enough in our test for any business or classroom use. Yellow leans towards a mustard yellow in every preset mode, and colors overall are a touch dulled down, making them a little dark in terms of a hue-saturation-brightness color model. However, the colors are fully saturated and acceptably eye catching.

Portable, but secure. The PJD5523w is small and light enough to serve as a traveling companion, at 3.2" x 11.2" x 9.2" (HWD) and 5.7 pounds. You'll have to buy a carrying case separately, however. The size also makes it easy to move the projector from room to room. For more permanent installation, or to secure the projector when you're not using it, it includes both a Kensington lock slot and a security bar.

Zoom lens. The 1.2x zoom lens gives reasonably good flexibility in adjusting image size, with enough range so you should generally be able to set the projector in place, turn it on, and then adjust size without having to move the projector again.

Longer than average lamp life. ViewSonic rates the PJD5223w's lamp life at 5000 hours in Normal mode and an even longer 6000 hours in Eco mode. At $229 street per replacement lamp, this promises to keep the total cost of ownership significantly lower than for similarly priced projectors with more typical 2000 to 3000 hour ratings for their lamps.

Brightness. We measured the PJD5223w in Brightest mode at 2293 lumens, about 85% of its rating and easily bright enough to leave the room lights on with the 92-inch diagonal (78-inch wide) image we used for testing. Eco mode dropped the brightness by only about 12%, to 2012 lumens, which is a more than fair trade for raising the lamp life by 20%. The six other presets range from 1866 lumens for PC mode to 839 lumens for Movie mode, which is still a little bright for theater dark lighting with the size image you'll probably want for a home theater.

Noticeable variation in brightness. We also measured a 54% brightness variation across the screen, with brightest and darkest areas close enough together so the difference was easy to see on a solid color screen, with a bright center area and a dim upper right hand corner.

Fortunately, most people won't consider this a serious issue. Although this level of variation is surprisingly large for a projector with a standard lens, it's common for short throw projectors, and most people simply don't have a problem with it. Break up the screen with text or graphics, and it's hard to see the difference in any case, although you can still make it out if you look for it.

The PJD5523w back panel offers a fairly typical set of connectors for a portable data projector, with an HDMI port for a computer or video source, two VGA ports for computers or component video sources, a pass through monitor port, and both S-video and composite video ports. There are also two mini plug jacks for stereo audio in and audio out, a mini-USB port for connecting to a computer for remote mouse control, and an RS-232 port for controlling the projector from a computer.

Unimpressive video quality. The PJD5523w's video quality isn't bad for a data projector, but isn't even in shooting distance for home theater. The Movie preset gave images a distinct green tint. The ViewMatch preset, which automatically adjusts contrast based on the content of the image, gave the most natural looking color, but it also boosted brightness to 1061 lumens. Even with the ViewMatch preset, however, colors had a dull look, typical of a low contrast ratio. The projector also had trouble maintaining shadow detail, although it did better than some data projectors I've seen. Overall, the quality is good enough for short clips, but not something I'd want to watch a full length movie with.

Obvious rainbow artifacts for video. Rainbow artifacts are a potential issue for any single-chip DLP projector, although the problem shows up more with some than others. The PJD5523w does well on this score with data images, with the artifacts showing up rarely enough so even those who are sensitive to seeing them should hardly notice them. With video, however, I saw the rainbows far more often. Anyone who sees them easily, as I do, is likely to find them annoying for anything more than short video clips.

Poor audio. Like most portable projectors, the PJD5523w's audio system is simply inadequate. It's loud enough to easily fill a small conference room, but the quality is poor enough so that even though I've memorized the dialog in most of the test clips, I had trouble making out the words. If you need good quality audio, you'll need an external audio system.

Limited 3D. As with all but a few other inexpensive 3D projectors, the PJD5523w does not support HDMI 1.4a 3D protocols, which means it can show 3D directly from appropriately equipped computers, but it needs to connect through a video converter to show 3D from a Blu-ray player or the like. In addition, you need enough pairs of DLP-Link glasses for your audience, at $70 or more each.

For my 3D tests, I connected to a Blu-ray player though a video converter. The 3D works, but with much more obvious crosstalk than with most projectors I've seen, an issue that makes viewing 3D somewhat unpleasant. As with most competing products, you'll have to make a substantial additional investment before you can use the projector for 3D. However, unlike most, once you've made that investment the crosstalk may leave you feeling it's not worth using.

Despite ViewSonic's claim that the PJD5523w is both a data projector and home theater projector, it's clearly best appreciated, and a much better fit, as a data projector. In particular, its data image quality is much better than its video image quality and its brightness is too high for most home theater setups but bright enough to stand up to ambient light in an office or classroom.

As a data projector, the PJD5523w is small and light enough to be portable. It's also easy to set up thanks to its zoom lens and any number of small -- even typical -- but still welcome touches. The manual zoom and focus rings, for example, offer just the right amount of resistance for sure control so you won't accidently overshoot the right position.

We can't recommend the PJD5523w as a home theater projector, or even as a data projector that you can bring home from the office occasionally for a movie night. Rather, our ratings and recommendation are based on judging it strictly as a data projector. In that context, it does its job well, and is easily worth considering.

For more detailed specifications and connections, check out our ViewSonic PJD5523W projector page.

this is really a very best projector
Matt Obasohan Posted Feb 26, 2012 11:17 AM PST
Dear Sir, I am seeking a used classroom projector to lecture day to day in the classroo. please let me know if there is any available
fathid Posted Mar 29, 2012 8:22 PM PST
Hey Marc Davidson, thanks for the extensive review, but can you comment on the movie/home theatre quality of this one vs. a OPtoma HD66. This review site raves about the Optima for movies - but the review was written by a different person; do you think the conclusions are compatible? thanks