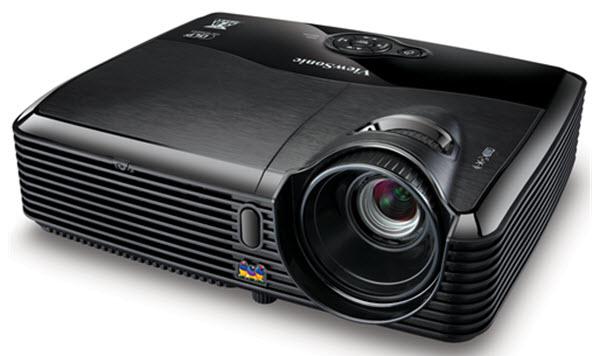 ViewSonic PJD6243: A Lot of Projector at a Low Price

The ViewSonic PJD6243 is a 5.7 lb. portable projector with a bright 3,200-lumen rating that is appropriate for classrooms and conference rooms alike. Street price is about $650, and while many other XGA projectors are priced lower, none can match the PJD6243's networking, video, and audio performance. The rear panel has connections for virtually any source found in classrooms or conference rooms, including HDMI. You can have two computers and three video sources connected simultaneously with two methods of switching between them. There are a couple of limitations you need to be aware of, but all in all, ViewSonic's PJD6243 is a lot of projector for a modest cost.

Many classroom projectors do a good job with data images but fall short on video performance. The PJD6243 is not one of them. The Movie preset is spot on, but if you feel the need to tweak the picture settings, the User modes provide all the adjustment range you will need. In fact, you can adjust all six projection colors (R, B, G, C, M, Y) if you are willing to devote the time to get the picture perfect.

Video images were color balanced and had plenty of pop. Shadows and highlights were well rendered given the contrast rating of 3,000:1. Flesh tones are always a tough test, but the PJD6243's Movie preset mode nailed them with no image adjustment needed. If you like to adjust the image for your particular taste, you have all the tools necessary in the User mode sections of the Picture menu. In fact, you can even adjust all picture settings for HDMI material, an uncommon feature in projectors of this class.

It is a treat to be able to connect a PC and a Mac simultaneously with HDMI video and a network. Not many inexpensive projectors can do that, but the PJD6243 is up to the task. It is also a pleasure to be able to crank up the volume to the point that it fills a medium sized room with clear, crisp sound. Its XGA resolution may not be theater quality, but given its picture quality and its robust 5-watt speaker, the PJD6243 may make you forget you are in a classroom.

Connectivity - The rear connector panel of the PJD6243 is loaded: dual VGA connectors for two computers (or one computer and component video), composite video, S-video, mini USB for computer mouse control, HDMI, RS-232 and RJ-45 network connections, audio in and out, and a VGA monitor loop through. The only input lacking is a Type A USB for memory sticks.

Audio Output - No competitor in its class offers a 5-watt speaker like the PJD6243. It may not suffice for an auditorium, but for small and medium sized rooms, it provides enough sound that no external audio amplification is needed. Throughout its range, there is no hint of rumble or buzz to distract the audience.

Networking -The PJD6243 offers wired networking that is compatible with Crestron's Room View application. Connected via the RJ-45 connector, it offers options such as e-mail alerts in the case of projector failure. Setting up a network management protocol is easy, and you can control networked projectors using a Web-based browser.

Presets - With four Preset modes (Brightest, PC, Movie, and ViewMatch) and three board modes (White, Black, and Green) that preset image adjustments for each application, the PJD6243 covers most projection environments. But the PJD6243 goes a step further by providing two User modes that allow for storage of unique picture settings. This is especially helpful when the projector is a shared resource, and users have different preferences for picture settings. Preset contrast, brightness, and color temperature are very close to optimal, especially in PC and Movie modes.

Picture Controls - When in one of the two User modes, you can adjust the picture in detail with individual hue, saturation, and gain settings for all six color components of the color wheel. There is even an option to customize the color temperature settings (Low, Mid, and High are standard) via R, G, and B gain controls.

Remote Control - ViewSonic has done an excellent job of laying out the remote control for the PJD6243. All buttons are clearly marked either with an icon or lettering, and they are grouped by function. Source selection is at the top, menu navigation is in the center, and mouse control and special function buttons are at the bottom. The Menu button is colored blue for easy identification, and there is even a programmable function button called "My Button" that can summon a regularly used function from the menu.

Warranty - The projector warranty is three years, and the lamp is warranted for an unusually long period of one year. This puts the PJD6243 in the upper rank when it comes to warranty terms.

Maintenance - The PJD6243's lamp is accessible through the top of the projector, so even if it is ceiling-mounted, lamp replacement is relatively easy. ViewSonic also recommends vacuuming the air intake area on the left side of the projector to keep any accumulated dust from blocking airflow to the interior of the projector.

Brightness and Uniformity - The PJD6243 is rated at 3,200 ANSI lumens, and it delivered exactly that in its Brightest setting. The other picture modes put up the following numbers: PC - 2,510 lumens; Movie and ViewMatch - 1,135 lumens each. There are also three blackboard modes that varied between 1,400 and 1,950 lumens depending on their color bias. The Eco lamp setting reduced brightness by about 25% in all modes.

Brightness uniformity was a bit surprising. Our sample unit only managed 59% with a noticeable brightness fall-off in the upper right portion of the image. This differential was only evident in data images with lots of white space; video images were unaffected.

Image Size and Offset - Tabletop or cart mounting works well with the PJD6243 since the bottom of the image is only slightly above the lens centerline. A drop tube would probably be needed for a ceiling mount. Projection distance for a 100" image ranges from 10.9 to 13.1 feet based on the PJD6243's zoom ratio of 1.2:1, so placement flexibility is a bit limited.

Lamp Life - ViewSonic uses a 240-watt lamp in the PJD6243 with a life of 3,500 hours in normal mode and 5,000 hours in Eco mode. Since Eco mode reduces fan noise and only reduces brightness by about 25%, it may be a good choice for everyday operation.

Uniformity - It may be limited to just our test sample, but the image brightness decrease from lower right to upper left was apparent when displaying data images with either primarily white or black backgrounds. Fortunately, video looked fine since changes in brightness across the screen are not as evident in video. Keep in mind that the most expensive high-end CRT-based home theater projectors of the past typically did not generate more than 50% brightness uniformity.

Fan Noise: While the fan noise components are confined to mid- and low-frequencies, the overall noise level is higher than most competitors. Although most of the heat and noise exits from the front of the projector, it still may be distracting for those seated closer than five feet from the projector. Using the Eco lamp setting solves the problem and only reduces brightness slightly.

Menu Selection and Navigation - The on-screen menus for the PJD6243 are intuitive and easy to navigate, but the OSD menu is large and covers a good portion of the image. Menu position is movable and transparency is adjustable, but common settings like brightness and contrast are not reduced to a single line at the bottom of the image, so it is inconvenient to see what effect setting changes are having.

ViewSonic has aimed the PJD6243 at the higher performance end of the XGA classroom spectrum, and they have hit the mark. The audio/video performance is excellent, and the networking capability outshines most of the competition. Controlling fan noise impact requires some effort, but the connectivity and versatility of the PJD6243 will offset that inconvenience for many users. This is a projector that merits our highest rating.

For more detailed specifications and connections, check out our ViewSonic PJD6243 projector page.