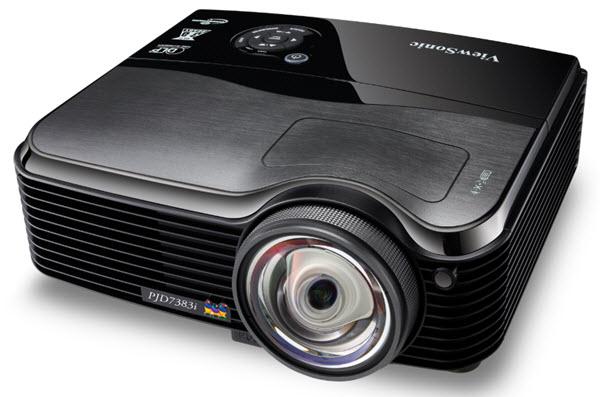 Interactive projectors may not be common yet, but they're no longer unusual. The latest example is the ViewSonic PJD7383i , a DLP projector with XGA (1024 x 768) native resolution and an assortment of features that it shares with a growing number of other interactive models.

As with other projectors based on TI's interactive technology, the PJD7383i offers a short throw and an interactive wand that doesn't need to touch the screen. The combination minimizes the chance of accidentally casting shadows. And because the projector doesn't need calibration, you can quickly set it up for an interactive session after moving it. What makes the PJD7383i particularly worth your attention, however, is its extraordinarily low price, at $1099 street, with an educational discount also available.

It's interactive. As with any interactive projector, the interactivity is both a key feature and the only reason for getting the projector. If you don't need it, you can save money by buying an equivalent model without it. If you need it, however, you can save a significant amount compared to buying a projector and a separate interactive whiteboard.

Includes Everything you need. As you would expect, the PJD7383i comes with an interactive wand. It should work with any interactive software, but if you don't already have a program, ViewSonic provides ViewDraw, which will let you highlight, draw, write in freehand, and otherwise add annotations. The wand also works as a mouse and even includes left and right mouse buttons and a scroll wheel. One particularly nice touch is that the projector's remote also offers mouse control and a laser pointer, which comes in handy when you're not using the interactive mode.

No calibration. One of the benefits of the TI interactive technology in the PJD7383i is that it doesn't need calibration. When the projector throws an image, it adds a grid that's invisible to the human eye, but that the wand can see so it can tell the projector where it's pointing. Skipping the need to calibrate helps makes setup easier. If you store the projector in the back of the room, move it from room to room, or take it with you to give a presentation, it can shave a few minutes off of set up time, which will be particularly welcome if you're giving a presentation in someone else's office.

No need to touch the screen. TI's technology also gives the PJD7383i some other advantages. Because the wand only has to see the screen rather than touch it, you can use any surface as a screen, including rough surfaces that might harm a stylus, painted surfaces that might be harmed by a stylus, and a screen that's simply hanging from a support without a solid backing behind it.

Being able to interact from a distance also helps avoid casting shadows, since you can stand to one side of the screen or stand next to the projector instead of between the projector and the screen. In a classroom, you can even move to a student's desk without interrupting the session, or stand in the back of the room.

In our tests, the wand worked at about 30 feet from the screen. Keep in mind, however, that the further you are from the screen, the harder it is to control what you've pointing at. I found that trying to give a command by clicking from more than a few feet didn't work well. The attempt to click was usually enough to move the pointer off what I was trying to click on.

Short throw. For an interactive projector, a short throw is a near necessity. Being able to project a large image from a short distance lets you stand close to the screen without getting in front of the projector and risk casting shadows. ViewSonic says the PJD7383i can project a 50" diagonal image from just 2 feet. We measured a 99" diagonal (79" wide) from 3.9 feet, which is still close enough to let you stand to the side of the projector without giving up good control for pointing the wand.

Good data image quality. The PJD7383i's data image quality is easily good enough for any business or educational context. Yellow was a little mustard colored, but not as noticeably mustard as in some earlier generation DLP projectors. More important, colors in general were suitably eye catching and well saturated.

The projector also did a good job with text, even at sizes smaller than you're likely to use. Black text on a white background held up well even with the smallest sizes we test with, and the less commonly used white text on black was easily readable on all but the two smallest sizes. The projector also did well with screens that tend to show pixel jitter, with images as rock solid as with a digital connection.

Suitably bright. We measured the PJD7383i using its brightest preset options at 2272 lumens. That's about 76% of the 3000 lumen rating, which is within the typical range for projectors. More important, it's bright enough to throw an appropriately large, bright image for a small to mid-size conference room or classroom with typical ambient lighting.

That's not the whole story for brightness, however, since you have to turn interactive mode off to get the brightest image. With the feature turned on, the brightness dropped to 1504 lumens. Keep in mind that perception of brightness changes far more slowly than changes in measured brightness, so the one third drop in lumens looks only a little less bright to the human eye. That said, note that when we turned on Eco mode as well, the brightness dropped to 1147 lumens, which is low enough so you may need to dim the lights or be satisfied with a somewhat smaller, but still acceptably large, image.

Good Connectivity: The projector's back panel lacks an HDMI port, but offers all the other connectors you're likely to need, including two VGA inputs for either computers or component video sources, both composite video and S-Video inputs, and a pass-through VGA port for a monitor. For stereo audio input, the two VGA ports share a single stereo miniplug, and the two video ports share a single set of RCA phono plugs. In addition, the projector offers one miniplug for a microphone and one for stereo output.

You can also send data to the projector over a network using the LAN connector, over a WiFi connection with an external $99 WiFi option, and can plug a memory key into the USB port to read JPG, BMP, TIF, PNG, or GIF files. Finally, a second USB port lets you connect to your computer to send images or use the interactive feature, and an RS232 port lets you control the projector from a PC.

Much better than typical audio. The PJD7383i offers far better audio than most projectors in its weight class -- just 7.7 pounds. The single 10-watt speaker is both loud enough to fill a small to mid size conference room or classroom, and offers high enough quality so I could hear words in video clips that get lost with most projectors. For large classrooms, however, you'll need an external sound system.

Usable, but low quality, video. Video quality is best described as not bad for a data projector. We saw slight posterization in faces in some scenes (with colors changing suddenly where they should change gradually) and a loss of shadow detail in others, but only in test clips that projectors tend to have problems with. Overall, the video quality is better than with some data projectors, but as with most, it's best reserved for short clips and for situations where high quality video isn't needed.

Moderately obvious rainbow artifacts. Rainbow artifacts, with light areas breaking up into red, green, and blue when you shift your gaze or an object moves on screen, are always a potential concern for a single-chip DLP projector. The PJD7383i shows the effect less often than some other current models, so that even those who are sensitive to it probably won't find it bothersome for data screens. With video, however, it tends to show up frequently enough in dark scenes that some people may well find it annoying for anything but short clips.

Limited 3D. As with most 3D-ready projectors, the PJD7383i's 3D capability is limited. It won't work with a Blu-ray player; you can't use 3D and interactive mode together; and you need enough pairs of DLP-Link glasses (at more than $100 each) for your audience. All of these limitations are typical, which means that, as with the competition, you may or may not ever be able to actually use the projector for 3D.

As one of a growing number of projectors built around TI's interactive technology, the PJD7383i shares many of its features with other short throw DLP interactive projectors. All of these choices have the advantages of not needing calibration, letting you use literally any surface as a whiteboard, and letting you throw a large image from a short distance. What makes the PJD7383i stand out, however, is its unusually low price.

At $1099 street price, the PJD7383i offers a complete interactive solution for what until recently would have been considered an unheard of low price. That, by itself, is more than enough reason to put it on your short list. Add in the fact that the low price comes without cutting corners, and the closer you look at it, the more attractive the PJD7383i looks.

For more detailed specifications and connections, check out our ViewSonic PJD7383i projector page.