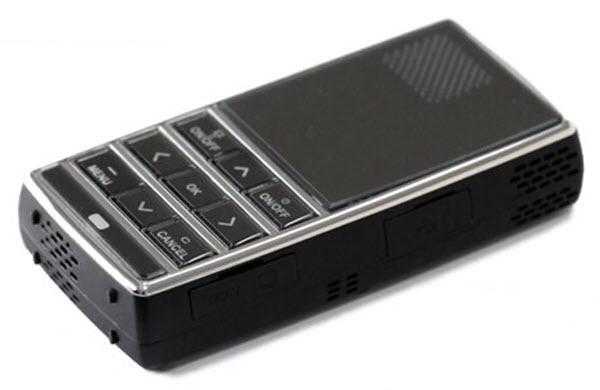 Pico projectors have been around for a few years now, and the products available today are much more mature than those available in previous years. Still, as hand-held products, there is one annoyance that no LED-powered pico projector can overcome: the need for focus adjustments.

The AAXA L1 is a different kind of pico projector, using a laser light source instead of an LED. The use of a laser means the projector never has to be focused. With built-in media player software, compatibility with Microsoft Office documents, and 160MB of onboard memory, the AAXA L1 is a pocket presenting powerhouse. While the MSRP of $599 is well above that of most other pico projectors, the L1 brings a lot to the table.

Image quality. The L1 is rated at 20 lumens maximum, and our test sample measured roughly 18 lumens. In a dark room, you could project up to a 45" diagonal, though a brighter environment will limit diagonal size to 20" or less. The image has a slightly green cast to it, but no more so than other current products in this market segment. Colors are well-saturated almost to the point of oversaturation, which makes the L1 a compelling product to use for the display of data graphics. Contrast in a dark room is quite good, with shadow detail in video maintained properly. Blacks are deep in comparison to similar products.

High resolution. Compared to most other pico projectors, the L1's native SVGA resolution is a huge improvement. Many pico projectors these days are only 640x480, or VGA, resolution. Of those that are SVGA, the L1 is, by far, the smallest and most fully-featured. This greater resolution makes it easier to read text documents or Powerpoint presentations without having to zoom in. It also makes photographs appear clearer and sharper. Furthermore, since the L1 uses a laser for illumination, it is difficult to see any visible pixelation, and there is zero "screen door" effect.

Long life lamp. The laser light source has an estimated life of 30,000 hours, which is in concert with all pocket/pico projectors using laser or LED light sources. In practical terms, the light source will far outlast the expected lifespan of the product, so users will not need to be concerned about lamp replacements.

True pocket size. The L1 measures only 4" long by 2" wide by .75" deep, making it truly "pocket sized" and easily transportable. And since the L1 has an onboard media player, you won't need to haul around any bulky accessories. For large video files, the most you will require is a simple USB memory stick. The L1 comes with a 2GB USB stick, though it can read higher-capacity drives if you happen to own them.

Connectivity. The L1, being such a small projector, has a limited number of ports. Specifically, it has a USB-A connection, a 1/8" headphone jack, a power connection for the wall charger, and an A/V port. It manages to use these ports for a surprising number of connections. The USB port is used to connect the L1 to a computer, so you can load the 160MB onboard memory with media files. It is also used to connect USB flash memory, which was our preferred mode of use during testing for its combination of large capacity and small size. The A/V port connects to one of the L1's breakout cables, allowing you to use VGA, composite, or s-video connections.

User interface. All of the controls for the L1 are on the body of the projector itself. The buttons are laid out in a neat , clearly-labeled format on the projector's top surface, and allow the user to navigate the menu and choose content to be played (if you are playing content from an external source, you will only need the "power" and "source" buttons). During use, these buttons occasionally felt sticky and hard to use, and we had to press harder than normal for the projector to register our intentions. If used in conjunction with a miniature tripod, it can be all too easy to tip the projector over when trying to press a button - so be careful.

Battery life. The L1's battery only lasts about 90 minutes under optimal conditions, but heavy use of video can cause the battery to run out sooner than that. Of course, using the A/C adapter can extend operating life indefinitely, but those on-the-go won't always have access to power or the luxury of time to use it. This also eliminates the possibility of using the L1 to watch a movie during travel, since many films are significantly longer than 90 minutes and most airplanes do not have readily available power outlets.

Mounting. The L1 is tripod-mountable, at least in theory. The projector does not have a hardpoint built in to the case itself, as do many other pico projectors, due to its small size. It includes a sort of cradle that can be attached to a tripod, but we had some difficulty attaching it to several brands of miniature tripod securely. The cradle itself does not clip securely to the body of the projector, so it can still tip over quite easily if jostled. And, since the projector is so small, a heavy cable attachment to the A/V port can make it difficult to aim the projector. Combined with all of these other factors, getting the projector into a stable, secure position can be a bit of a hassle.

The AAXA L1 is the first laser pico projector we've seen, and that part of its performance is unquestionably impressive. For the first time, there is a pico projector that never needs to be focused, ensuring that your data is clear and legible at all times. This, combined with the projector's high resolution, make the L1 a great choice for the display of text documents and Powerpoint presentations.

However, the price tag is a bit off-putting. At $599, the L1 costs more than many high-lumen, portable full-sized SVGA projectors, and in fact costs more than several XGA projectors. And, aside from its laser light source, the L1 has features that are comparable to several other lower-cost pico projection products. For example, the 3M MPro150 (reviewed last month) also has the ability to display Microsoft Office documents, video files, PDF documents, JPG images, and play MP3 files through its onboard speaker or attached headphones. Its battery lasts longer, with a life of two full hours when watching video. It, too, has a fairly bright picture, at 15 lumens. Like the L1 it has the ability to read data from internal storage, but it has a whole gigabyte of internal storage while the L1 only has 160 megabytes. The MPro150 also has a tripod mount, but it is integral to the projector and much less prone to falling over. In short, if you are just looking for a pico projector for presentations, there are other compelling options available for less money (the MPro150 costs only $350).

The most compelling features of the L1 are its laser light source and high resolution display. If you absolutely need an SVGA pico projector that never needs to be focused, the L1 is still your best option to-date. However, if all you need is a fully-featured pico projector, the L1 is not the only game in town.

For more detailed specifications and connections, check out our AAXA L1 projector page.

Comments (7) Post a Comment
Noli Posted Apr 9, 2010 5:47 AM PST
Great little thing! These things are getting more and more impressive. No mention of noise - do these things emit any? Is it annoying at all? Can't wait for more resolution (+widescreen!) but most of all, can't wait for DIGITAL inputs i.e. mini HDMI and/or mini display port (appreciate that the electronics for them would take up more room). It won't be long before VGA outputs disappear from laptops I reckon...
Shah Nawaz Posted Apr 9, 2010 11:13 AM PST
I still wonder if 20 lumens brightness is of any practical use. Is there any record showing how many pocket projectors are in use? But Pico has taken great initiative in AV Industry. It will take sometime before AV companies start realising the potential of pocket projectos.
Mattp Posted Apr 9, 2010 5:31 PM PST
I've used a pico projector for professional use, but would say it's not replacement for when I typically use a projector. Often my presentations are on papers I've co-authored, and the audience is often at least 20 if not 100+ people. At that point, you really need something with the many 1000's of lumens and screens well over 100".

However, I used this for small presentations to potential employers, and for the 3 or 4 people that I wanted to show my work to, this was a great option.

One way to increase the usable screen size or enhance usability in general is through the use of a screen with gain. I picked up a piece of Dalite High Power that is roughly 36" in 4/3, and this was more than bright enough for much of my work.

When this same laser technology begins to make it's way into home theater projectors, I foresee major improvements in the area of contrast and sharpness. Lasers as light sources means no more focusing, sharp at any distance. The optics can be simplified as well, and setup in such a way that ensures perfect crisp focus.
Jason Tilk Posted Apr 9, 2010 6:25 PM PST
I actually just got one of these. 20 Lumens works fine! It's not good for well lit rooms but in moderate darkness it does its job. I can actually watch 70-80 inch videos no problem in dark rooms. It came with a 2GB memory card which holds full length movies I have on my computer. Nice review!
Jason Posted Apr 12, 2010 12:43 PM PST
Yes! I love this thing. Great review guys. I got mine in the mail and posted a video of it playing the movie Troy in my office. Check it out if you want a live demo.

http://www.youtube.com/watch?v=wPr0gwDnGPo
leopkay Posted Apr 22, 2010 8:53 PM PST
Question: Does it has 240-110 V power and 60-50Hz?
Ara Posted Feb 1, 2012 2:25 AM PST
Can it be operated as an extended desktop? I don't find it anywhere and in the specs or manual. I want to project something on the wall while viewing something different from my lap top (for example: power point presenter view). I've seen mini projectors that can only duplicate the primary monitor, these can be really inconvenient sometimes. Thanks.