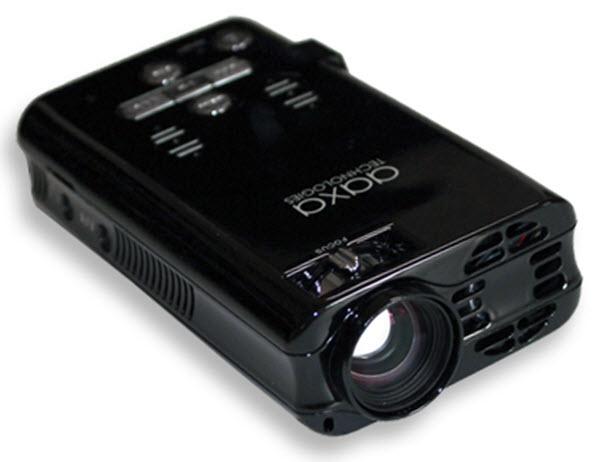 With its SVGA (800 x 600) LCOS chip and 33 lumen rating, the AAXA P2 delivers both higher resolution and higher brightness than most pocket projectors. It also scores well on features, connecting to computers and video devices as well as reading files directly from a micro-SD card or its own 1 GB of memory. However, the P2 pushes the envelope for size, with a battery that's nearly as big as the projector itself. The total package, which is roughly twice as big as most pocket projectors, adds up to a reasonable, if not compelling, choice for $349 direct from AAXA Technologies.

Excellent Connectivity. Unlike most pocket projectors, the P2 offers a VGA connector on the projector, so you can use any standard VGA cable to connect to a notebook. It also comes with its own 5-foot VGA cable and a 15-inch video cable. The video cable ends in a miniplug on one side to plug into the P2, and three female RCA connectors on the other so you can plug in a standard composite video, or video-plus-audio, cable going to a video device. For those who need them, AAXA also sells additional cables for moderate prices, with choices for an iPod ($19.99 direct), Zune ($12.99 direct), and Playstation Portable ($18.99 direct).

Reads Files Directly. The P2 can also read an assortment of file types directly, so you don't have to carry a notebook or video device with you. It can read BMP, JPG, and GIF files for presentations or photos; AVI, WMV, MP4, OGG, and SMV files for video; and MP3, WMA, and WAV files for audio. It can even read text (TXT) files if you need it to.

For maximum convenience, you can store files on either a micro-SD card or in the projector's own 1 GB of memory. To use a memory card, you simply plug it into the slot on the P2. To use the internal memory, you connect the supplied USB cable between a computer and the mini-USB connector on the side of the P2, and copy the files. (According to AAXA, to work with a Mac the Mac has to be set to read discs formatted for Windows.) With either approach, buttons on the projector or its remote let you work your way through the P2's menu system and pick the files to read.

Includes Sturdy Tripod for Easily Adjustable Image Height. Like the P2 itself, the tripod it comes with is a little bigger than the tripods bundled with most other pocket projectors. The telescoping legs are about 4 inches long when closed but almost 7 inches long when open, which gives the tripod both a wide, stable stance and flexibility in height adjustments. In addition, the ball mount on top makes it easy to swivel the projector to point up, down, left, or right, as needed.

Unusually Bright. AAXA rates the P2 at 33 lumens. We measured it at 22 lumens, whether in Bright, Cinema, or Normal mode, and a reasonable result for the rating. The more significant comparison is to competing projectors. Most are rated at 12 lumens or less, which makes the P2 unusually bright. Given the way the human visual system perceives brightness, a 22 lumen projector won't look anywhere near twice as bright as an 11 lumen projector, but it's enough of a difference to be noticeable. Quite simply, for any given image size, the P2 will throw a brighter image than most other pocket projectors.

Large for a Pocket Projector. The P2 by itself is on the large side for a pocket projector, measuring 4.3- x 2.3-x 1.1-inches and weighing 9 ounces. In addition, the battery is a separate unit that slides onto the bottom of the projector. With the battery, the P2 is 4.3- x 2.3- x 1.6-inches and weighs a relatively heavy (for a pocket projector) 12.5 ounces. The combination has about the size and heft of two decks of playing cards. However, you also have the choice of leaving the battery off the projector, and using the P2's AC power cable instead.

Low Battery Life with a Long Recharge Time. Even if you plan to use the battery, you'll probably want to keep the power adaptor handy. AAXA rates the battery life at 45- to 60-minutes. That's enough for a short business presentation, but for longer sessions you'll have to use the power adaptor or buy the external (5.3- x 3- x 1-inch, 13.4 ounce) $79 battery option, with a promised 2.5- to 3-hour battery life. Note too that the recharge time for a fully discharged battery is a relatively long 4 hours for the standard battery and 5 to 6 hours for the external battery.

Low Volume Audio for External Sources. The P2 offers an unusual approach to volume, with two volume settings that add to each other. Each is set with different controls, and both have to be at maximum to get maximum volume. The top volume is impressive for a pocket projector, and enough to let you hear everything comfortably if you're sitting next to the projector or plug a headset into the mini-plug audio output. However, one of the volume settings works only with files on memory cards or internal memory, which makes the volume much lower if you're using an external source.

Without the second volume setting, the P2's speakers are easily drowned out by ambient noise, and even if you use a headset, the volume is surprisingly low. AAXA says it expects to improve the volume with a firmware upgrade. The upgrade will be available for downloading from the AAXA web site.

Fan Noise. Unlike most pocket projectors, the P2 uses a cooling fan, which contributes to the short battery life and adds a constant low level hum for the audio to compete with. AAXA rates the fan noise at 30 decibels.

Poor Brightness Uniformity. The P2 does a poor job of maintaining even brightness across the image, which is typical for pocket projectors. We measured the brightness uniformity at 66%. The issue is effectively hidden with images that use darker colors or are visually busy, as with most photos and video clips, but on a solid light color screen, as you might use in a presentation, it shows as a noticeable dimness around the outside edge of the screen.

Image Quality Issues. The P2's image quality is very much in the same category as all other pocket projectors to date: good enough to be useful, but well short of impressive. It's a little better suited to data than to video or photos, but useful for all three. Even in a dark room, colors on data screens were noticeably washed out in our tests. However, there was no significant pixel jitter (with individual pixels jumping back and forth) even on screens designed to bring out jitter, and black text on a white background was readable even at smaller font sizes than you should generally use in a presentation.

Photos and video both suffered from a tendency to lose detail based on shading, particularly in dark areas, and in some images the colors took on a harsh tone. The projector also suffers from a halo effect -- a dim light around the outside of the image, forming a frame of sorts. The halo, which is common with LCOS projectors, is obvious enough in a darkened room so that some people will likely find it distracting.

If you're looking for a pocket projector, the argument for the P2 is its (so-far) unique combination of brightness and flexibility. You can bring the standard battery or optional 3- hour battery with you to avoid the hassle of plugging in the power adaptor, or depend on the power adaptor and not have to bring the battery. You can connect to a wide variety of data and video sources, or copy all your files to the internal memory or a micro-SD card and not have to carry anything with you but the projector. Most important, you can choose the option that works best for the immediate task at hand, and have a brighter image than most pocket projectors offer.


For more detailed specifications and connections, check out our AAXA P2 projector page.

Comments (2) Post a Comment
Rick Hollm Posted Mar 23, 2010 5:16 PM PST
Good review. I noticed that you mentioned the lower Lumen rating (22 Lumens) and the washed out colors and wanted to know if you adjusted the brightness/contrast and color saturation settings that are available with the IR remote control menu? I noticed that those settings significantly impact brightness and color saturation on my unit. Currently the unit defaults to the half setting (50 out of 100).
Stephen Posted Dec 17, 2010 12:55 PM PST
Can the device play powerpoint presentations?