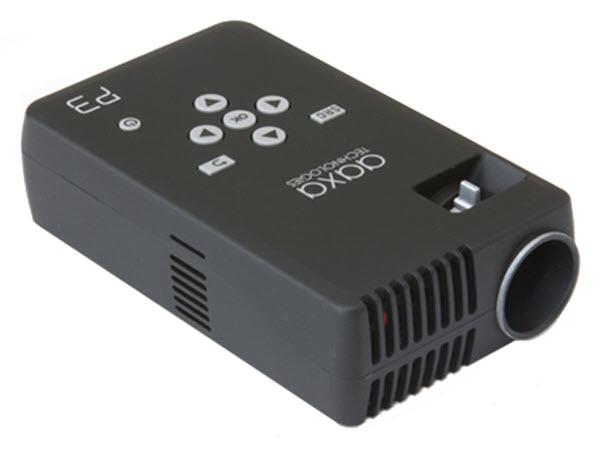 Pico projectors like the LCOS-based AAXA P3 are up against stiff competition lately, with a new class of slightly larger, much brighter choices available. The P3, for example, is rated at 50 lumens (and scored lower in our tests) compared to ratings of 200 lumens or more for pocket projectors which are the next step up in size and price. That said, smaller pico projectors like the P3 still have the advantage of literally fitting in a shirt pocket (as long as you don't try stuffing in the power block and adaptor cables with it). The small size by itself is enough to make them worth considering.

AAXA's pico projectors tend to offer extras that make them stand out. For the P3, the extras include a full size HDMI port and a native widescreen resolution, at 1024x600. (The actual aspect ratio is about 16:9.4, but I'll refer to it as 16:9 here, since that's what the P3's menu system calls it). Also worth mention is that the P3 accepted input at 1080p in my tests, even though AAXA claims a maximum input resolution of 1280x768.

The key shortcoming for the P3 and other pico projectors its size remains the low brightness. However, the P3 is brighter than earlier generations of pico projectors, which were rated as low as 10 lumens, so it's certainly bright enough to be useful. And the $269 price is more than a little attractive for a projector you can carry with you easily, run from batteries, and connect to computers, composite video sources, USB memory keys, and anything with an HDMI port.

Good data image quality. The P3's data image quality is better than many, if not most, pico projectors. But there's a hedge that goes with that comment. Because the 1024x600 resolution is unusual, there's a good chance your computer won't offer it as one of its settings. If you choose any other resolution and set the P3 to its widescreen aspect ratio, you'll degrade the image to some extent because of scaling artifacts caused by adding or dropping pixels in the image (as sent from the computer) to fit it on the screen.

Because these scaling artifacts won't make any difference for issues like color and color balance, I ran most tests with the projector in its widescreen setting, with a 45" diagonal image at the roughly 16:9 aspect ratio. For images that would be affected by scaling artifacts, however, which includes text screens and screens with repetitive patterns of closely spaced dots or lines, I set the computer to 800x600 and set the P3 to a 4:3 aspect ratio, which for the P3 also translates to 800x600.

With that hedge in mind, the P3 delivered suitably vibrant and well saturated color, and it did a good job on color balance, maintaining neutral grays on assorted levels from white to black. Text smaller than 9 points lost crispness, making it hard to read but still readable, and I saw very little pixel jitter on screens that tend to cause jitter. Keep in mind, however, that if you use the projector in widescreen mode and set the computer for any resolution other than 1024x600, your results will be anywhere from a little to a lot worse, depending on the computer's resolution setting.

Good video image quality. The P3's video image quality is surprisingly good for a pico projector. I saw some moderate problems with shadow detail and posterization on scenes that tend to bring those issues out. However, with scenes that are better lit, which includes the vast majority of video you're likely to look at, I saw only a minor loss of shadow detail and no posterization. Colors were a little dull, as you would expect from a low contrast ratio, but the image was eminently watchable.

Relatively few rainbow artifacts. Adding to the image quality for both data and video is that the P3 shows fewer rainbow artifacts than most pocket projectors. I tend to see these artifacts easily, but with data images, I saw them only on screens designed to bring them out. With video, they cropped up fairly often on one clip with a lot of small bright elements surrounded by dark areas, which is precisely what tends to make them show easily. In most of my tests clips, however, they showed up infrequently or not at all. Even those who see rainbow artifacts easily probably won't see them often enough with the P3 to find them bothersome.

Suitably Portable. One of the strongest arguments for any pico projector is that it's small and portable. The P3 easily qualifies on both scores, at 1.4" x 2.6" x 4.6" inches (HWD), and roughly 7.5 ounces by itself or 11.5 ounces if you include the power block. Adding an HDMI cable and the VGA, composite video, and USB adaptors cuts down a little on portability. However, as a practical matter, you wouldn't usually carry more than one cable or adaptor with you. In addition, the claimed 65 minute battery life is long enough so you may not need the power block for every trip.

Brightness. I measured the P3 at 35 lumens -- 70% of its claimed 50 lumens -- with its Standard preset and brightest mode, also called Standard. The two other presets came in at 35 and 27 lumens. Eco mode drops the brightness to 19 lumens, and running off the battery also drops it to 19 lumens, a disappointing 53% of the claimed 35 lumens.

AAXA says that the P3 is usable for image sizes up to 80" with low ambient light, but that seems optimistic. At 35 lumens, I found it usable with the lights off for the roughly 45" diagonal image at 16:9 that I used for measuring brightness. However, it's noticeably dim at that size, and tiring to look at for a long session. I kept moving it closer and closer to the screen, winding up with a 34" image for comfortable viewing in a dark room. Consider the low brightness the price you have to pay for the P3's portability.

Brightness uniformity issues. The P3 maintains uniform brightness over most of the screen, as suggested by its 83% brightness uniformity measurement. However, the standard protocol for measuring uniformity leaves out the extreme edges of the screen, where the P3's brightness drops off noticeably. The review unit had vertical strips along both edges from top to bottom -- covering perhaps 5% of the screen on one side and half of that on the other -- that looked much like shadows. The issue effectively disappeared in darker scenes, but was easy to see on screens with light colored backgrounds. Some people can probably ignore this easily, but others might find it distracting.

Connectivity. Like most pocket projectors, the P3 offers few standard connectors on the projector itself. The exception is the full size HDMI port for a computer or video source. Beyond that, it comes with cables and adaptors for computers, composite video sources, and USB memory keys.

A supplied 40" cable plugs into the P3's non-standard port on one side and a computer's VGA connector on the other. A supplied AV adaptor similarly plugs into a miniplug jack on the P3, but in this case ends with three female phono plugs that you can use to connect a standard composite video cable. Similarly, a supplied USB adaptor plugs into the P3's mini USB port on one side and ends in a USB A connector for a memory key on the other. As you might expect, the P3 can read an assortment of common image, movie, and sound files from USB keys, including the JPG, MPEG-4, and MP3 files I tested with.

Finally, for iPod, Zune, and PSP connections, you can get one of AAXA's optional AV adaptors for $12.99 to $19.99 each. Rounding out the list of connectors are a miniplug jack for audio output and the power connector.

No zoom. As with most pico projectors, the P3 doesn't offer a zoom lens, so the only way to adjust image size is to move the projector.

Hard to focus. The P3's focus control is slightly recessed, making it hard to hold onto and control precisely. In addition, the focus changes a lot with very little movement, a combination that makes it hard to change focus without overshooting the right position. It took me several tries every time I moved the projector just to get close to good focus, and I was never satisfied that I had it exactly right.

Barely usable audio. The P3's 1-watt speaker, like the speakers on most small pocket projectors, is hardly worth having. If you want sound, you'll need a headset or external powered speakers.

The AAXA P3 is a capable representative of its breed, with strong points that include both data and image quality. The lower than promised brightness is disappointing, but the P3 is brighter than earlier generation pico projectors, and even those projectors were bright enough to be useful.

Very much on the plus side is the P3's portability, partly due to the small size and low weight. It's also enhanced by both the reasonably good battery life and the ability to read files directly from a USB key, so you don't need to carry a bulky image source with you. Other pluses include the widescreen native resolution, the HDMI port, and some smaller touches too. Like many pico projectors, for example, the P3 comes with a small flexible tripod that screws into the bottom of the projector and makes it easy to point up or down to whatever you're using for a screen.

Small pico projectors in general aren't as compelling as they were before slightly larger and much brighter pocket projector models were available. But they're still the smallest, least expensive choice. If you need (or want) a projector small enough to fit in a shirt pocket, the AAXA P3 offers a balance of data image quality, video image quality, brightness, features, and price that make it a more than reasonable pick.

For more detailed specifications and connections, check out our AAXA P3 projector page.

Comments (2) Post a Comment
mouseman Posted Nov 3, 2012 8:35 AM PST
I got one of these and used it twice. It was decent although the colors were a little washed out. The third time I tried to use it, it would not com on. Tech support told me to send it back. They supposedly fixed it, but when I got it back it still did not work. I sent it back again and they returned it and it still does not work. I am going to try to get my money back.
Sara Bellam Posted Sep 12, 2014 7:28 AM PST
After adjusting the screen resolution on the Toshiba satellite laptop to the recommended 1024x600 resolution for the P3 projector, the projector flashes a "Not available" message on the screen--this is only the projector display, not the laptop display.

Also, the projector shut down during my presentation for no apparent reason--I was able to restart it right away, but I check all connections and that did not seem to be the problem.