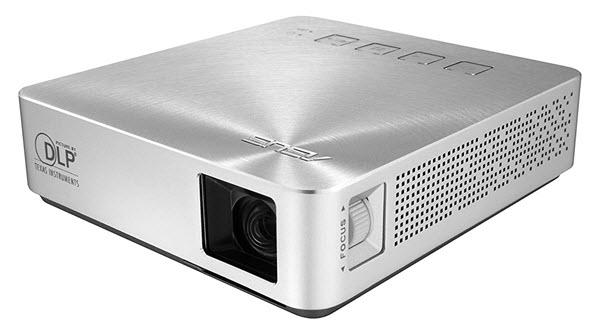 With the ASUS S1 Pocket Projector, ASUS has managed to shoehorn a surprisingly capable projector into a nearly rectangular block that's small enough to fit on your palm. It even looks good, with a silver metal case, rounded corners, and a high quality fit and finish. Like most projectors this size, it's built around a DLP chip and an LED light source. Also like most, it's meant for both casual home use and for business presentations on the go. The native 854x480 resolution, with its 16:9 aspect ratio, seems targeted more for home than business, but the 200-lumen brightness rating, measured at 150 lumens, makes it bright enough to be useful in either role.

Note that the only input is MHL-enabled HDMI. That makes it easy to use with an MHL-capable phone or tablet, but also means you may not be able to connect it to your laptop. Assuming you can connect it, however, it can be a highly useful traveling companion, and nearly an impulse buy, at $319.99.

Like most projectors in its size and weight class, the S1 is built around a DLP chip that's designed to maximize brightness, but also adds apparent scaling artifacts. The artifacts are most obvious as added patterns in areas filled with repeating patterns of dots or fine lines. They can also give images a soft focus look.

You'll see similar artifacts with any DLP or LCD projector if you use an input signal that doesn't match the projector's native resolution. With the S1, however, they also show up at the native 854x480. Fortunately, this isn't necessarily a problem. If you don't use patterned fills in graphics, you may never see the artifacts, and even if you see them, you may not mind them.

The S1 has an advantage as well, compared with higher resolution models with the same issue. If 854x480 is the appropriate resolution for your needs, you probably won't be showing images with a level of detail that will be noticeably affected by a slightly soft focus. And given the SD resolution, you're not likely to notice any effect in video or photos either.

Also demanding mention is that the S1's color brightness matched its white brightness in my tests. That's notable because many DLP projectors, including models that use LEDs, have significant differences between the two, which can affect both color quality and the brightness of color images. Having the same value for both means you don't have to worry about that possibility.

Data image quality. In most other ways data image quality was impressive for a projector in S1's size and brightness range. Color balance was excellent, with definitively neutral grays at various levels from black to white in all predefined image modes. Color quality was just as good, with vibrant, eye-catching color in all modes. More important for data images, the S1 handled detail well enough for any images you're likely to use an 854x480 projector for, including PowerPoint slides. White text on black, for example, was crisp and readable at 9.0 points, and black text on white was easily readable at 7.5 points, despite a minor soft focus effect.

Video quality. Although the S1's video quality is limited by its native SD resolution, its (nearly) 16:9 aspect ratio at least lets it take full advantage of the resolution it has with widescreen video. Colors are within an acceptable range, as long as you're not too much of a perfectionist. However, the predefined Theater mode has obviously better color than the brightest mode, which tends to give skin tones a green tint. That basically leaves you a choice between noticeably better color and a larger usable image. Colors also tend to be a little flat, as you would expect from a low contrast ratio.

On the plus side, the projector did a good job with shadow detail, even with clips that many data projectors have problems with, and it showed only a hint of posterization in scenes that tend to cause that problem. As long as you don't see rainbow artifacts easily, or don't mind seeing them occasionally, the video is more than watchable for long sessions.

Setting up the Projector

Limited Connectivity. The back panel on the S1 offers only three connectors:

1 HDMI, MHL enabled for easy connection to an MHL-capable phone or tablet.
1 mini-plug audio out
1 USB A (For providing power to a USB device)


Keep in mind that you can connect between the HDMI port and a DisplayPort, Apple Lightning port, or a DVI-I or DVI-D port. If you don't have at least one of these on the image source you want to use, however, you won't be able to connect.

Setting up. Assuming you have an appropriate connector on your image source, setting up the S1 is easy. Plug in the cable, turn the projector on, point it at the screen, and focus. Using the power cord is optional, assuming the S1's battery is charged.

One welcome touch is that the focus ring moves more than is typical with small projectors before you'll see a significant change in focus. That makes it easier than with most models to find the best setting. Another plus is that the two rubber feet--one all the way across the front and one across the back--do a good job of holding the projector in place. Most small projectors pivot away from the screen easily if there's even the slightest tension on the cables.

As with most projectors this size, there's no zoom, so you have to move the S1 to adjust image size. For most of my tests, I used a 52" diagonal image with the projector 45" from the screen.

Note too that the S1's vertical offset lines up the bottom of the image with the center of the lens. That works particularly well if you're using a table-top screen on the same table as the projector. If you need to adjust the image position and don't have a tripod, you'll need to tilt the projector up or down by putting something under its front or back edge. If you do that, however, you won't be able to square off the image, since there's no keystone adjustment.

Highly portable. The S1 measures 1.2" x 4.4" x 4.0" (HWD), and weighs just 13 ounces with its rechargeable battery. That may be all you need to carry, since the fully charged battery is rated at 3 hours in the S1's Battery mode. Add the power block, supplied HMDI cable, and soft carrying case the S1 comes with, and it's still only 1.75 pounds.

Low running costs. ASUS rates the light source at 30,000 hours, which means it should last the life of the projector.

Brightness. Using AC power, I measured the S1 at 150 lumens in its brightest predefined image mode and at 127 lumens in Theater mode. That makes it bright enough for a 30" to 35" image for extended viewing in moderate ambient light, or a roughly 45" to 65" image in theater dark lighting. The 52" image I settled on for testing is also quite watchable for short sessions in moderate ambient light.

Using battery power, the brightness dropped to 108 lumens in Presentation mode and 71 lumens for the low power Battery mode. That translates to being suitable for roughly a 20" to 25" image for long sessions in moderate ambient light.

Good brightness uniformity. The projector did an even better job maintaining uniform brightness than its 78% uniformity measure suggests. The dimmest and brightest areas were far enough apart, with the brightness changing gradually enough, that I couldn't see any difference even with a solid white screen.

I've already touched on all of the S1's limitations worth mentioning. All but one are typical for this category of projector.

No zoom. Like most small projectors, the S1 lacks a zoom lens.

Limited connection choices. You can only use image sources that can connect to an HDMI port.

The ASUS S1 sits in a comfortable niche between competing pocket projectors that are similarly portable but not as bright, and 300- and 500-lumen models that are brighter, not as portable, and more expensive. Unfortunately, if you need to use an image source that can't connect to an HDMI port, it's useless. But if HDMI will work with everything you need to connect to, the S1 delivers a winning balance of image quality, portability, brightness, sound quality, volume, and price. That's more than enough to make it an attractive choice.

For more detailed specifications and connections, check out our ASUS S1 projector page.

Comments (9) Post a Comment
Claude Posted May 29, 2014 2:22 PM PST
I thought LED lighting eliminated the rainbow effect ? Is that not correct ?
Evan Powell, Editor Posted May 29, 2014 2:36 PM PST
Claude, that is not correct. Sometimes it can make it worse. The LED light source functions by alternating red, green, and blue in temporal sequence, just like a color wheel does, and that's what causes the problem.
Wayne Posted Jun 2, 2014 8:46 AM PST
I'm interested in the reviewer's discussion of brightness and the term "moderate ambient light". Does that mean it can be used in hotel hallways outside conference rooms? The lighting in such places is softer than office lighting, but certainly not "theatre dark".

If I'm showing slides on the wall outside the conference room, for people to glance at as they arrive, will they see something useful?

Given the above, I'm disappointed that the projector doesn't have connectivity for USB thumb drives, SD cards or WiFi.

Does anyone have suggestions for a projector that's bright enough and better connected?

Thanks.
Ignacio Posted Jun 6, 2014 9:01 AM PST
I've had a brookstone hdmi projector for 2 years now, it's a great little projector that has served me great but I am looking for an upgrade within the same dimensions. I certainly welcome the added lummens but I wonder if there is a projector this size with 720p resolution? Also can you comment of the fan noise compared to the brookstone?
Tim Thompson Posted Jun 17, 2014 7:50 PM PST
Does it have a fan? How noisy is it?
Dare Posted Oct 14, 2014 10:31 PM PST
The asus S1 has no built-in wireless connectivity however, I saw a video on youtube that demostrated how it can be used with an ASUS wireless dongle plugged into its HDMI port.

Does anyone know which dongles are compartible with it? I'll really like to be able to connect my laptop and phone to it wirelessly for ease.
Greg Green Posted Dec 17, 2014 10:05 AM PST
What resolution do I need? I have the projector and all it is showing is the desktop background. Nothing else shows up.
Samuel Onyiego Bosire. Posted Nov 2, 2015 7:33 AM PST
I bought Asus S1 pocket projector. I connected it to my laptop using the HDMI cable, it doesn't show any picture, just writes NO SIGNAL. What might be the problem?.
Evan Powell, Editor Posted Nov 2, 2015 7:48 AM PST
Samuel, typically it is because your laptop does not automatically output a video signal via HDMI until you tell it to in the display settings.