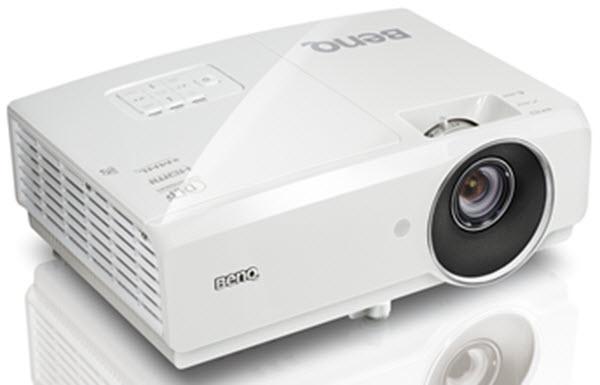 Although the 1080p resolution BenQ MH741 is meant primarily for business and education, it actually handles video and games better than some 1080p projectors sold as crossover models for home and business. It has some shortcomings for video image quality, but it also shows fewer rainbow artifacts with video than you'd see on most DLP data projectors.

Priced at $899, the MH741 is less expensive than some of its more direct competition. Its bright 4000-lumen light engine packs enough wallop to light up a 140" screen either indoors or in your backyard at night. And at 7.25 pounds, it's light enough for transportable applications.

As with most business projectors, the BenQ MH741 is designed to give relatively better quality for data images than video, showing even fewer rainbow artifacts with static data images than with video, for example.

Among the projector's best performance attributes is how well it handles detail in data images. White text on black was crisp and readable at 6 points, and black text on white was highly readable at 4.5 points. The image was also rock solid. Test images designed to bring out pixel jitter and moire patterns showed neither on the MH741 even with an analog (VGA) connection, leaving no room for improvement when we switched to a digital (HDMI) port.

All four color preset modes--Bright, Presentation, sRGB, and Cinema--have enough of a differential between white brightness and color brightness to give at least some colors in each mode a dull, dark look. However every mode also includes at least some colors that look vibrant, and all colors are nicely saturated. In addition, color balance is excellent in three of the four modes, with neutral grays at all levels from white to black. The exception is Bright mode, which has a slight yellow bias. Even in Bright mode, however, color balance is acceptable, with the same degree of bias across the entire range from black to white.

For business presentations and similar static images, overall color quality is good to near-excellent. Cinema mode delivers the most vibrant color for images like PowerPoint slides and graphs. Bright mode offers the highest brightness for images with a white background, like word processing documents and spreadsheets.

For photos and full motion video, colors are a little dull in all modes. The test unit also showed a slight green bias. However, the color was well within a reasonable range, particularly for the sRGB and Cinema modes. Most people would only notice the bias in a side-by-side comparison to a projector with better color quality.

Rainbow artifacts are not an issue for data presentations. They showed easily with one test image that's designed to bring them out, but that's the only time I saw any in my data image tests. With video, I saw so few rainbows in well-lit scenes--including clips where they tend to show--that it's hard to believe anyone would consider them a problem. However, they did occur often enough in a dark night-time scene and in a black and white clip that anyone who sees them easily could find them occasionally bothersome, depending on the source material.

2D video shows a bit more panning judder than on some projectors, but--as with the rainbow artifacts--not enough to consider a serious problem. It also shows a hint of posterization in clips that tend to bring that out. More important is that even in clips that don't show obvious posterization in the form of sudden changes in color, there's a loss of the more subtle shading that helps to make objects look three dimensional even in 2D.

Arguably the most important limiting factor for video display is digital noise. It was obvious enough in most of my test clips to be hard to miss, showing in almost all extended areas without detail, like walls or sky. Depending on your tastes--and possibly depending on whether you were brought up with the noise inherent in broadcast analog TV--you might or might not consider it acceptable for extended viewing.

3D video offers essentially the same quality as 2D video for those aspects of image quality that both share, with only the typical drop in brightness that comes with 3D. Beyond that, I didn't see any crosstalk, and saw only the barest hint of 3D-related motion artifacts.

HDMI w/ MHL. Connect through either of two HDMI ports, one of which is MHL enabled.

Lightweight. At 7.25 pounds the MH741 is light enough to carry from home to office or wherever you might need it. BenQ also ships it with a soft carrying case to make transportation easier.

Zoom. The 1.3x zoom provides some flexibility for how far you can put the MH741 from the screen for a given size image.

Useful audio. The built-in mono speaker doesn't deliver the volume you might expect from its 10-watt rating, but the sound quality is good, and the volume is enough to fill a small room.

Full HD 3D. In addition to offering full HD 3D compatibility and working with DLP-Link glasses, the MH741 automatically switches between 2D and 3D to match the input signal.

Security. The menu offers password protection, and there's a Kensington lock slot on the left side.

Brightness. The MH741 offers four factory preset modes and can store two user-defined modes. The sample unit that BenQ provided for testing came in at roughly 90% of its 4000-lumen brightness rating on our tests in its Bright preset mode, and at just under 80% of its rating in each of its other three presets.

With the zoom lens at its widest angle setting (the shortest throw for the image size), we measured the ANSI Lumens for the Normal and Economic lamp settings at:

Eco mode. Eco mode reduces brightness by about 25%, along with it comes a reduction in fan noise.

Zoom Lens Effect. With the 1.3x zoom lens at its full telephoto setting, brightness drops by a little less than 6 percent which is invisible to the human eye.

Brightness uniformity. The measured brightness uniformity is an unusually low 53%. That's enough to see an obvious difference on a solid white screen. With the test unit on a table in front of the screen, the image was clearly brighter near the bottom of the screen than the top and along the centerline compared with the sides. However, the brightness changes gradually enough across the screen that it's hard to see a difference with an image that breaks up the field of view unless you look for it. Few people are likely to notice the difference, much less consider it a problem.

Color brightness. We measured the MH741's color brightness at 18% of the white brightness in Bright mode and 26% in sRGB and Cinema modes, which are the two presets that offer the best color quality. The relatively low color brightness levels explains why there are at least some dull-looking colors in all modes. Keep in mind too that the lower color brightness means that full color graphics and video will not be as bright as you would expect from a 4000-lumen projector.

Rainbow artifacts. Rainbows rarely show in static data images or well-lit full-motion video. However, they show often enough in black-and-white movies and dark scenes in color movies that anyone who sees them easily may find them occasionally annoying.

Fan noise. Audible noise, rated at 36dB in Normal mode, is loud enough to notice from a few feet away in a quiet room, but it is the sort of low-pitched hum that I don't find annoying. I'm comfortable with white noise, however. If this is one of your pet peeves, you probably won't want to sit within five feet of the projector while watching a movie. Economic mode drops to a far quieter, and even less bothersome, 31dB rating, with a similarly low pitch. High altitude mode, which BenQ recommends for a 1500-meter (4921 foot) altitude isn't rated, but both the volume and quality sound like a vacuum cleaner running in the next room, with the door open in Normal mode or closed in Economic mode. I would limit the MH741 to the Economic setting if forced to use high altitude mode, and I wouldn't want to use it in any room where anyone had to sit within several feet of the projector.

Input lag. Lag as measured by the Bodnar meter is 33.0 ms.

Lamp life. The rated lamp life is 2,500 hours in Normal mode, 3,500 hours in Economic mode and up to 4,500 hours in SmartEco mode. According to BenQ, SmartEco works much like an auto-iris to make dark scenes darker, but does it by lowering the power going to the lamp. Replacements are $249.

The MH741 can throw a 120" diagonal 16:9 image from a range of 10 feet at its widest angle setting to 13 feet at its full telephoto setting. The Projection Calculator will let you see the available throw distance range for the screen size you want to use.

The lens offset is appropriate for putting the projector on a table below the screen or inverted in a ceiling mount. With the MH741 on a table, the bottom of the image is roughly 15% of the image height above the midline of the lens, or about 9 inches above for a 120" image. If you need to tilt the projector or aim it at an angle, you can correct for keystone distortion with an automatic vertical keystone correction or manual vertical and horizontal correction up to plus or minus 30 degrees in each case. You can also adjust each corner of the image separately.

Be sure to plan for lamp degradation. High-pressure lamps typically lose 25% of their brightness in the first 500 hours of use, and then degrade further, but much more slowly, after that.

If you plan to use the MH741 as a portable projector, you might want to make sure it's initially bright enough even when using Economic lamp mode, so you can switch to Normal mode to regain brightness as the lamp ages.

For either portable use or permanent installation, unless color quality is a primary consideration, you can also make sure one of the lower-brightness preset color modes is bright enough to start with, and switch to brighter modes as the lamp ages.

Color Brightness. Low color brightness readings mean that you realize the full lumen power of the projector primarily with b/w text documents, financial data sheets, b/w films, and any other subject matter that is largely lacking in color.

Rainbow artifacts. Although rainbow artifacts aren't an issue for data presentations and show rarely enough with video to make the MH741 useable for long video sessions, they show often enough in a video's dark scenes that viewers sensitive to rainbows might find them occasionally distracting.

Audio system. The MH741's mono speaker offers enough volume for only a small room. If you want stereo, higher volume, or better sound quality, plan on connecting an external audio system to the stereo output.

Fan noise. If you're particularly bothered by noise, the MH741 is just loud enough that you may want to limit it to Eco mode, with its lower brightness.

The BenQ MH741 is a potentially good fit as a data projector that can double for occasional home entertainment use. For data presentations, it delivers crisp detail, a rock-solid image, good color quality, and almost no rainbow artifacts. It is at its most brilliant with b/w text documents and financial spreadsheets.

As a home entertainment projector it the MH741 offers good--though not excellent--color quality, watchable video, fewer rainbow artifacts than most DLP business projectors, full 3D support and, for gamers, and an attractively fast 33 ms lag time. Factor in the 7.25-pound weight and supplied soft carrying case, and it's a strong candidate in particular if you need a 1080p projector you can use on the go or carry between home and office.


For more detailed specifications and connections, check out our BenQ MH741 projector page.