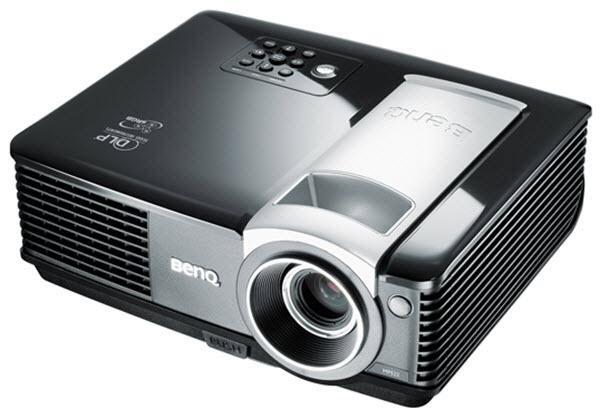 BenQ's MP522ST, an XGA short-throw DLP projector, is a good choice for use on a rolling cart in a small classroom. Its short throw distance gives it the ability to project a 100" diagonal 4:3 image from only six feet away, while its high lumen output and near-perfect edge-to-edge sharpness make it particularly suitable for any sort of spreadsheets or finely detailed images. With street prices around $800, the MP522ST has some shortcomings, but is a solid performer overall.

Short throw. The MP522ST's short-throw lens makes it easy to project a big picture without requiring a big space. A 100" diagonal picture can be displayed with just six feet of throw distance, while a 60" diagonal image needs only 3' 7" of throw. In a cramped classroom, this allows the teacher to keep the projector close at hand and out of the students' way.

Bright picture. The MP522ST is rated for 2,000 lumens, and our test unit actually measured 1,921 lumens. This slight difference might be chalked up to manufacturing variances, and it means that the MP522ST is pretty much as bright as the specifications claim it is. In an industry where many projectors fall very short of their lumen ratings, we tip our hats to BenQ for delivering a projector that, for all practical purposes, measures up to the spec.

In a partially darkened room with modest ambient light, 2,000 lumens can be too much light, which can cause eyestrain and headaches. A picture that is too bright will cause students to have a harder time absorbing the material. To reduce light output on this model, you've got a couple options. First, you can use Economy lamp mode, which reduces lumens by 23%. Second, you can put it into Cinema mode, which drops brightness to 725 lumens and made color appear much more natural. For video or movie material being watched in a dark room, this would be an ideal setting. Three year warranty. The MP522ST has a warranty of three years, which is as good as it gets in the projector business. It also has a five-year warranty on the DLP chip itself. This lengthy warranty can help to protect the school against premature failure of their equipment, thereby saving them money and keeping teachers happy.

Low cost of maintenance. With a lamp life of 4,000 hours in Economy mode, no dust filter, and lamp replacements that cost only $200, the MP522ST has a very low "total cost of ownership." Combined with the warranty mentioned above, this projector should keep on ticking for years to come with a bare minimum of maintenance.

Good edge-to-edge sharpness. Another common problem with short-throw projectors is that it is often difficult to keep the entire image in perfect focus, so the MP522ST should be praised for its nearly perfect edge-to-edge sharpness. Documents with fine detail or small text are displayed with maximum clarity, so nothing is lost in the translation from PC to projector screen.

Poor remote. The MP522ST has a small, credit-card-style remote control that has some basic functions on it - menu control, keystone, digital zoom, and access to a presentation timer. However, there is no volume control of any kind on the remote, including mute. The projector has a 5W speaker onboard, so it would be unfortunate to accidentally blast your audience's ears and not have a way to quickly turn the volume down.

Poor connectivity. The MP522ST has a rather sparse connection panel, consisting of a VGA input, a monitor passthrough, a serial port, composite video, s-video, 1/8" audio input, and a Kensington lock point. Other projectors in its class and price range tend to have multiple VGA ports, if not digital input. Again, while not everyone uses these features, they are useful for those who need them.

The BenQ MP522ST has a lot going for it - it is bright, sharp, and able to put a big picture on screen from a short distance. However, it also has its flaws - the remote control is missing some key features and connectivity could be far better than it is. The missing features aren't things that everyone would use, and as such the BenQ MP522ST may be just perfect for your classroom. Be aware of what the projector is and isn't capable of, and make a smart purchase - and maybe you'll find that the MP522ST is right for you. Look for this one at street prices under $800.

For more detailed specifications and connections, check out our BenQ MP522ST projector page.

Comments (2) Post a Comment
Ron Bauer Posted Jun 23, 2009 4:49 PM PST
I think you have wrong info on the warranty. Its listed at only a Year. (Projector Central Note: Manufacturer lists warranty as 3 years http://www.benq.us/products/Projector/?product=816&page=specifications# )

? How fast is the refresh rate? Can't get an anwser from Benq.