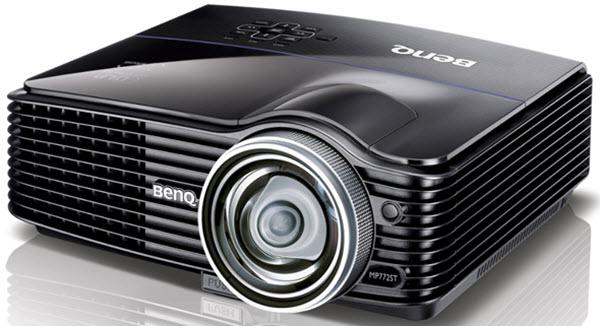 Has your presentation ever been disturbed by an audience member strolling in front of the projector and blocking the image on the screen? Do you ever use an electronic whiteboard and find your own shadow obscuring the image on the board? If so, there's a modestly priced solution available in the form of BenQ's MP772ST short-throw projector which will put up a 74" image from a mere three feet. This 2,500-lumen projector is aimed at the classroom market, but it suits small- to medium-size business conference rooms, too.

Brightness: It's nice to see a projector meet its brightness claim, and the 772ST does just that. In Dynamic mode, it delivered 2,735 ANSI lumens which actually exceeds its spec of 2,500 ANSI lumens. Presentation and Cinema modes dropped the light output to 2,325 and 890 ANSI lumens, respectively, but those lower values are appropriate to the content for those modes. Eco mode will reduce the brightness of any operating mode by 22%, but it extends lamp life from 3,000 to 4,000 hours. Eco mode also reduces power consumption and lowers fan noise while image brightness can still be up to 2,130 ANSI lumens.

Uniformity: Brightness uniformity was less than stellar at 60% with a bit more light on the left side of the image. This imbalance is visible with an all-white calibration image, but it isn't particularly noticeable on most media content.

The MP772ST will always be placed near the screen and away from the audience, so there's no annoying blast of warm air or high audio volume impact for those that might otherwise be seated near the projector. That means you can ease the strain on your vocal chords when speaking during your presentation.

Focus is excellent across the entire screen. Small text is easy to read in the corners, and spreadsheets were crisp and clear from edge to edge. Even 8-point type, which is hard enough to read on a laptop, was easy to discern on the screen.

While there isn't a lot of 3-D educational material published yet, it's a coming trend and this projector will be ready when it arrives in force. The MP772ST utilizes Texas Instruments' 3-D DLP technology, and although it currently requires the use of special LCD shutter glasses whose cost will probably not fit most classroom budgets, this technology may change over time as 3-D plays an increasing role in classroom education.

Speaking of classroom environments, the MP772ST has the requisite Kensington lock capability, and it's compatible with Crestron's remote control systems via its RS-232 (DB-9) connector. In addition, there's a RJ-45 input which facilitates Internet connectivity. You'll also find the usual complement of RGB, S-video, and component video inputs. It does not have a digital input, but that is of minor consequence for its intended uses.

In the maintenance category, the 210-watt lamp is accessible through the top of the projector so it's easy to replace even in ceiling mount configurations. Another safety feature is the reinforced cage around the lamp should it ever shatter . . . it's rare, but it happens. Lamp replacement cost is relatively low at $219, and lamp life is a healthy 3000/4000 hours in Normal/Eco modes. Finally, BenQ uses a sealed DLP chip so there's no air filter to replace. All in all, maintenance is relatively cheap and easy.

Image quality is good with both PC and video sources although presets in both cases have a slight tint. In PC mode, the Dynamic setting is essentially tint-free while the screen image in Presentation and sRGB settings is slightly red and the Cinema setting has a green tint. Still, in PC mode the overall impact of these color biases is minimal. In video mode, sRGB is tint-free, Dynamic is slightly green, and Presentation and Cinema settings tend toward red. For movie viewing, the best flesh tones, color balance, and screen brightness are achieved in User mode with the Dynamic setting, Eco mode on, and color temperature at the T4. It may not be the equivalent of a home theater experience, but on balance, it's a good result from an inexpensive projector.

One thing to keep in mind is that with a short-throw lens, the bottom of the image won't be much above the level of the lens. To get the image high enough for all to see, you'll either have to place the projector on a stand or AV cart that's chest high, or you'll have to angle the projector upward by adjusting its front foot. If that's necessary, the keystone adjustment can take care of image distortions, but you might also consider angling the screen to reduce the keystone effect. Of course, this isn't possible with a wall-mounted screen or a whiteboard, but if you get the chance, angle the screen (top out or bottom in) and you'll reduce any keystone correction needed.

Whiteboard Applications: This projector is terrific for whiteboard applications especially if it can be ceiling mounted. Even when placed at tabletop height, it throws a big image from a short distance, and that is a must for easy viewing from the back row. Because it's placed so close to the screen, there is no chance that you or a wandering member of your audience will inadvertently block the light from the projector and disrupt your presentation.

Speakers: Beefy dual 5-watt speakers make external audio amplification unnecessary in small- to moderate-size rooms. While external amplifiers can be accommodated via the stereo mini-jack output connector, there's plenty of internal capability to handle most situations. There's a bit of audible speaker vibration at the highest volume setting, but for most listening environments, the internal speakers suffice nicely.

Remote Control: While many remote controls these days are not much bigger than a credit card, BenQ has chosen to supply a full-size remote with many functions available at the touch of a button. With 25 separate buttons, the remote gives you nearly total control of projector functions that other manufacturers confine to on-screen menus. For example, you can call up the contrast and brightness controls, digital zoom, and even the aspect ratio of the image from the remote. As an added benefit, a full-size remote control is unlikely to leave the room in someone's shirt pocket as is the case many times with credit card-size remotes.

Laser Pointer: How many times have you wished you had a laser pointer in hand to call attention to some important point in your presentation? The MP772ST has solved that need by building a laser pointer into the remote. The button to actuate it is large and colorful enough that even in dim light, it's easy to see. This is an unusual feature for a remote, and it is a nice touch by BenQ's design engineers.

Fan Noise: Fan noise is a bit noticeable in quiet rooms, but if your audience acts normally (whispering while you speak and throat clearing during your most important point), you'll probably never notice. If it becomes a problem and room ambient light isn't an issue, you can switch to Eco mode which will reduce fan noise at the expense of about 22% of the Normal mode brightness. Most of the fan noise is low frequency, but there's a mid-frequency component that sounds more electronic than mechanical. Room furnishings (drapes, carpets, etc.) may absorb some of this higher-frequency noise, but the projector's placement near the screen is what minimizes the noise impact.

No Zoom Lens: Perhaps this shouldn't be listed as a limitation because no short-throw projector we've seen offers a zoom lens. Nevertheless, its absence does make projector set-up a bit less flexible. If you need to make the projected image just a little larger or a bit smaller to fit the screen, then you'll have to move the projector or the screen to do it.

Preset Modes: BenQ has included several preset modes, PC as well as video, for adjusting the screen image to suit movies and computer data. There are also controls to compensate for wall color if a white screen isn't being used. These preset modes are convenient for those who don't wish to tweak the projector's image when changing presentation sources, but if image adjustments are called for it's not as convenient on the MP772ST as some other projectors we've seen. No video adjustments can be made in any of the projector's preset modes. All preset modes are just that . . . preset.

The factory presets are pretty much on the mark, but personal taste or room requirements may make you want to change a setting or two. If you don't like what you see, you can go into the on-screen menu and choose a User mode that allows you to vary all the usual video settings (e.g., brightness, contrast, saturation, etc.). There are two independent User modes that can be customized, for example, for playing DVD videos and showing computer data. Once set up, these two User mode settings can be saved until modified.

At $899 list and $749 for education, the BenQ MP772ST packs a pretty good punch. It's bright, versatile, and especially effective when you want to have your projector close to the screen. Its audio output is robust, and its on-screen menus and remote are intuitive and easy to navigate. It lacks a zoom capability that may make image set-up a bit less flexible, but once in play, it's a worthy contender for both education and small venue business presentations.