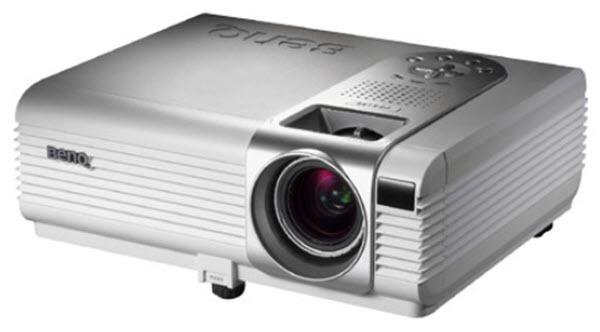 The new BenQ PE5120 is BenQ's latest release for the home theater market. It just commenced shipments last month, and is currently selling at an official estimated street price of just $1,249. This is an impressive entry level projector for those that want to get into home theater but don't want to spend much doing it. It is also a simple, easy to use machine that is designed for those who don't want to mess with tweaks and calibrations. If you are new to home theater and want a good experience with your first projector, the PE5120 has a lot to offer for the money.

Lens and throw distance. Manual zoom and focus with a modest 1.2x zoom range. A 100" diagonal 16:9 image is obtained in the range of about 11.5 to 13.9 feet. There is no lens shift, but the unit has a bit more aggressive offset (projection angle) than is typical. If you ceiling mount it without tilting it downward, keeping the centerline of the lens perpendicular to the screen plane, the top edge of a 16:9 image will be located at about 1/3 the picture height below the centerline of the lens.

Lamp. 200W lamp with 2000-hour lamp life, extended to 3000 hours in eco-mode. Replacement lamp is $400 retail, which is typical for this class of product. (see article on replacement lamps).

Connection panel. Located on the rear of the unit. Video/data input connections include one DVI-I w/ HDCP, one 3-RCA component video, one S-video, and one composite video.

The PE5120 is a simple, easy to use projector that is ready to go right out of the box. It is designed with the first time projector user in mind. The menu is well laid out, and easy to use. The extra large remote control is beautifully designed with convenient layout, adequate space between buttons, and full backlighting.

The 854x480 format is ideal for NTSC format DVDs which are encoded at 720x480. The one-to-one mapping of the lines on the DVD to the lines on the display means no vertical scaling is required, resulting in very sharp images. Standard NTSC television also looks quite good on this unit, again due in part to the native nonscaled display of 4:3 material.

HDTV material, while not quite as razor sharp as you get with higher resolution projectors, is quite admirable and absolutely engaging. However, those who are particularly interested in the highest possible performance for HDTV would want to scrape together some more money and go for a higher resolution projector. But given the small impact the PE5120 has on your wallet, this is a great value even for HDTV.

The PE5120 is somewhat brighter than most of the other home theater projectors we've seen lately. The Cinema option gives you maximum contrast performance, and the economy mode reduces fan noise and increases lamp life. With both selected, lumen output is as its lowest, which we measured at 380 ANSI lumens. Switching to standard lamp mode boost lumen output to about 480 lumens, which is bright enough to light up a very large screen as long as you have no ambient light.

The PE5120 has several other precalibrated settings including gaming, which is the lowest in video contrast but by far the brightest, boosting lumen output to over 600. So the kids can hook up the game boxes and enjoy a big, bright image without having to sit in the dark.

As with all lower resolution projectors, pixels are a bit more apparent than they are with more expensive units. However, if you position yourself at a viewing distance of about twice the screen width the pixelation becomes invisible and you have a clean, well integrated image.

The small form factor might initially suggest the possibility of mounting the unit in a bookcase or shelf on the rear wall. A note of caution here. This unit exhausts heat out the rear of the unit, so it needs plenty of rear clearance for adequate heat dissipation. So bookcase mounting is not advised unless you use an external fan to eliminate heat buildup around the unit.

Shelf mounting behind the seating area may also be a difficult due to the throw distance limitations. For example, if you wish to place seating at 2x the screen width to eliminate visible pixelation, that would be a distance of 14.5 feet from a 100" diagonal screen. The PE5120 cannot hit a 100" screen from that far back. One option would be to place the seats and the projector closer to the screen and accept seeing a bit of pixelation. Or you could choose instead to (a) ceiling mount the projector, or (b) table mount it between the seats. (A coffee table placement in front of the seating is not recommended--too much light is visible in the rear vents, and it would create a visual distraction in a dark viewing space).

The good news is that the built-in projection angle is perfect for table mounting between the seats because it will throw the image at just the right height on the wall--high enough, but not so high that you are forced to look up at it, which puts unusual stress on the neck over time. In addition, the rear exhaust will direct the heat away from viewers, and the low fan noise lets you sit quite close to it without it being a distraction. This is the easy way to get started in home theater.

Each of these units has advantages the other does not. The 4805 has a six-segment (red/green/blue/red/green/blue) color wheel with a rotation speed of 4x. Meanwhile the PE5120 has a five-segment wheel with rotation speed of 2x. The higher rotation speed on the 4805 will cut down on rainbow artifacts for people who are sensitive to them. On the other hand the five segment wheel on the PE5120 has a clear segment that allows for more potential lumen output, especially in gaming mode, allowing more successful viewing with some light on in the room. In Cinema mode the PE5120 is a bit brighter than the 4805, but not so much that it would be a major factor in deciding between the two.

The 4805 has an advantage in black level, contrast, and color saturation. However the difference in overall picture quality between these two projectors is not dramatic. The PE5120 will deliver a very competitive image assuming the street price differential that we anticipate (at least $200) materializes.

There are a variety of image tweaking and calibration controls on the 4805 that do not exist on the PE5120. If you are a budding videophile these controls will appeal to you. However, if you want no muss, no fuss entertainment and don't want to play around with gammas, gains, offsets, and calibrating your own color temperatures, the PE5120 should suit you just fine. The 5120 has all the basic picture adjustments that most people would want, including brightness, contrast, color saturation, tint, and sharpness. The 5120 also has three preprogrammed color temperature settings--low, medium, and high--that you can select based on the type of material you are watching.

The 4805 has a slightly longer average throw distance. Given a 100" diagonal screen the 4805 will sit about two feet further back from the screen than the 5120. This might be an important practical consideration for those setting up in smaller viewing rooms.

In economy mode the PE5120's lamp life is 3000 hours, whereas it is 4000 hours on the 4805. Whether this makes any real difference to you depends upon how much viewing time you intend to put on your projector on a monthly basis.

The 4805 has a louder fan. We would not operate the 4805 in the higher of the two fan modes for home theater viewing as the noise is too distracting. Meanwhile, fan noise is not a problem on the PE5120. Fan noise even in normal lamp mode is not bad at all, and it is very low in economy mode. Furthermore, the PE5120 fan turns off when it is powered down to stand-by mode, while the 4805 continues to run a fan in stand-by mode to keep the power supply cool. The only way to shut it off completely is to turn off AC power to the unit.

As far as warranties a concerned, the PE5120 comes with a 3-year warranty, while the 4805 is standard with 2-year warranty.

The bottom line is that both of these projectors are great values for the money. The InFocus 4805 is the more fully-featured of the two, while the PE52120 is designed as an easy-to-use entertainment projector without all the tweaks. Though the 4805 has more features onboard and a bit of an edge in picture quality, its higher fan noise, somewhat longer throw distance, lower lumen output, and (probably) higher price will tip many buyers in favor of the PE5120.

For more detailed specifications and connections, check out our BenQ PE5120 projector page.