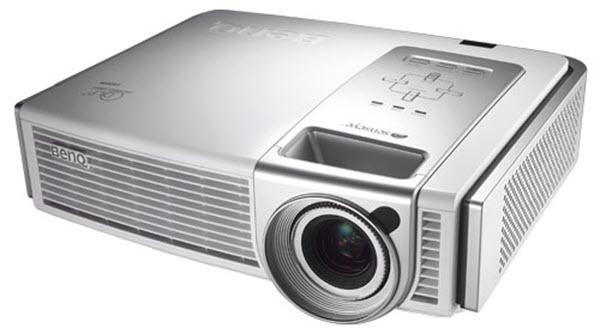 Home theater projectors using the HD2+ DLP chip have been delivering excellent overall performance, including impressively high contrast. However, this performance has always cost a significant chunk of change. With the release of the BenQ PE7700, HD2+ performance drops below $3,000 for the first time, and it is quite the sight to see. Connection Panel. One composite video, one S-Video, One set of standard YPbPr component inputs, one set of five BNC component/RGB inputs, one HDMI port (which accepts DVI-I or DVI-D with HDCP, component and RGB video), and one RS-232C port for an external control.

The BenQ PE7700 puts out an impressive amount of light. Rated at 1100 ANSI lumens, we were able to produce approximately 750 ANSI lumens at settings ideal for, say, a football game in the family room. At settings better suited for home theater, the PE7700 produces closer to 400 lumens, which is more than enough to light up a large screen - you can use a screen up to 120" diagonal and still get a great picture.

Lumen output on the PE7700 is highly adjustable. Changing the lamp mode from Economy to Full results in a 25% increase in lumen output, which can help combat the effects of ambient light washing out the image. Likewise, switching from "Home Theater" to "Family Room" mode delivers nearly 50% more light to the screen (with the lamp output set at Full, switching from Home Theater mode to Family Room mode took lumen output from 500 lumens to about 720 lumens). However, for best color performance and contrast, it is still advisable to darken the viewing environment as much as possible, and stick with the Economy lamp mode and the Home Theater color profile.

The PE7700 produces average brightness uniformity - on our test unit the upper left corner of the image was 33% dimmer than the center. However the rest of the screen was illuminated more evenly, and during normal viewing of films and video the reduced lumen value in one corner is barely noticeable.

Most projectors using the HD2+ DLP chip have excellent contrast, and the PE7700 is no exception. High contrast and deep black levels are sufficient to give the image good snap. In a large majority of cases, shadow details are rendered with good separation without blocking up.

The PE7700's image is also nearly noise-free, with very little dithering in shadows and low-light areas. To further reduce noise, there is a noise filter that you can activate via the menu. If you are faced for some reason with a particularly noisy source, this option should make for a more enjoyable experience.

The one exception that we found in the PE7700's otherwise good contrast performance was that, due to the low gamma setting in "Cinema" mode, it tends to crush the low end of the grayscale (from 20 IRE to 0 IRE) into one shade, which reduces shadow area definition, causing it to become muddy and unclear. Attempting to correct for this by adjusting brightness and contrast settings tends to wash out the image and turn black to gray. Fortunately you can opt for the Home Theater mode instead of the Cinema mode. This boosts gamma and gives better separation in the bottom end of the grayscale. We would encourage you to evaluate each of the PE7700's color profiles rather than selecting one based on the name it was assigned.

The PE7700 includes BenQ's new SensEye technology, which is supposed to automatically optimize contrast, sharpness, and color balance to provide the best possible viewing experience. Color is indeed impressive on the PE7700; the projector easily differentiates between similar shades of the same color, and avoids oversaturation while still maintaining richness and realism.

BenQ's onboard video processing makes for a good image, with some room for improvement in deinterlacing ability, which is perhaps the PE7700's only major flaw. When fed an interlaced signal, there was a substantial amount of breakup in panning and motion scenes. We achieved much better results by switching to progressive scan output on our DVD player.

Scaling is a different story. When HDTV 1080i was downscaled to the PE7700's native 720p, the picture was clean, bright, and sharp. When upscaling 480p material, the picture was relatively clean and clear, though still slightly soft.

Overall the PE7700's onboard scaler outperformed the optional upscaling on our DVD player, but did not quite match the results of the DVDO iScan HD+ video processor. If you have a DVD player that lets you rescale the signal to 720p before outputting it, try switching back and forth to see which set up produces the better image. If you were already planning to purchase the iScan HD+, you will notice some improvement; however, the projector's onboard scaler is still of very high quality, and it is questionable whether the incremental image sharpness you get from the iScan HD+ is worth its price.

The first thing to look at on a single-chip DLP projector is the color wheel. The PE7700 sports a 5x rotation speed, six-segment wheel, which means that the chances of seeing color separation artifacts are slim. However, if you are prone to experience the rainbow effect, we still recommend trying this unit before you make a purchase - some people are still bothered by rainbow artifacts on DLP projectors even with the 5x speed color wheels.

The menu system on the PE7700 is elegantly designed and logical to navigate, though there are some hidden options that one might miss the first or second time through. These options, however, are best left to advanced users, so this is not necessarily a bad thing. The only complaint we have about the menu is that it takes up a fair portion of the displayed image when it is active; roughly 1/4 of the image is covered. However, there is an option to reposition the on-screen menu which helps minimize any annoyance caused by the size of the menu.

BenQ's remote for the PE7700 is very well done. There are direct-access buttons for all sources, all aspect ratios, all memory presets for image settings, the four main image adjustments (brightness, contrast, color, tint), and a large easy to locate backlight button. While it is larger than most projector remotes, it is also elegantly designed and easy to use.

If the PE7700's color performance using one of the standard profiles is not to your liking, you have the ability to independently adjust red, green, blue, yellow, and white levels in order to fine-tune the color balance of the PE7700.

The PE7700 has a comprehensive color temperature adjustment system, including three presets as well as two user-defined settings. "Warm," at 5300K, is a good choice for classic black and white movies. "Standard" at 6500K and "cool" 10500K are good for normal NTSC material and data presentation, respectively. These settings can be adjusted using independent RGB gain and offset controls, which means that any color temperature the user prefers is possible.

Picture-In-Picture is available, allowing the user to display two different sources simultaneously, with one windowed in a corner. It also has Picture-On-Picture, allowing two separate sources to be displayed side-by-side. The only limitation on these features is that one of the sources must be from the "Video" group (either Composite or S-Video sources) and the other must be from the "Graphics" group (Component or HDMI). Ideally, we would have liked to see the ability to display two sources from the same group, but then most projectors don't offer this feature at all.

While many projectors include pre-calibrated color profiles for different applications, it is rare to find near-perfect calibration out of the box. With the PE7700, you can simply plug in, power it up, and select a profile - the resulting image is nearly as good as it gets with this unit.

The PE7700's housing is elegant, and keeps light leakage down to an absolute minimum. There is a very small degree of light leakage through the front vent, but the rest of the case is free of errant light. This proves useful in any mounting situation.

Similarly, fan noise is also kept well under control on the PE7700. At 29dB in Full mode and 26dB in economy mode, this projector is one of the quietest units we've seen recently. Fan noise should not be an issue in any circumstance. If you do end up rear shelf mounting the PE7700, the noise output is not likely to become a distraction.

The PE7700 projects at an angle such that the centerline of the lens intersects the bottom edge of the projected image when table top mounted, or the top edge of the image when ceiling mounted. This creates some limitations to be aware of when planning your installation. If you want to set it on a coffee table, odds are that the image will be too low on the wall, and you'll need to tilt the projector up a bit. On the other hand if you want to ceiling mount it flush with the ceiling, the image will be too high on the wall, and you'll want to tilt it down. If you place it upright on a rear shelf, the image may again be too high. So the only options many users will have to install it without a tilt is to ceiling mount it with an extension tube or invert it on a relatively high shelf.

Luckily if you need to tilt the PE7700 to accommodate your viewing space, the projector's scaling due to keystone adjustment is excellent. While there was some occasional slight blurring in the image, it was not noticeable except when very close to the screen. So if you need to, you can tilt the projector and use keystone correction without fear of degrading the image quality. Nevertheless, it would have been helpful if physical lens shift had been included on this projector.

Throw distance is also something to think about as you plan the installation. For example, if you want to obtain a 120" diagonal image, the PE7700 must be placed somewhere between 11'6" and 15'7" from the screen. That means your viewing room must be between 13' and 17' deep, or a rear-wall shelf mount won't be an option.

In short, practical considerations related to throw distances and throw angles are vitally important in the selection of any projector, not just the PE7700. Each model has unique parameters that create limitations on how it can be installed. To get the most out of your home theater, you have to get a projector that fits your space.

The BenQ PE7700 is a lot of projector for the money, and the first projector featuring the HD2+ DLP chip to boast an MSRP under the $3,000 mark. After a full review of this projector, we found no major flaws aside from the easily bypassed onboard deinterlacing. Delivering outstanding image quality and an impressive feature set, the PE7700 is more than worth the price.

For more detailed specifications and connections, check out our BenQ PE7700 projector page.