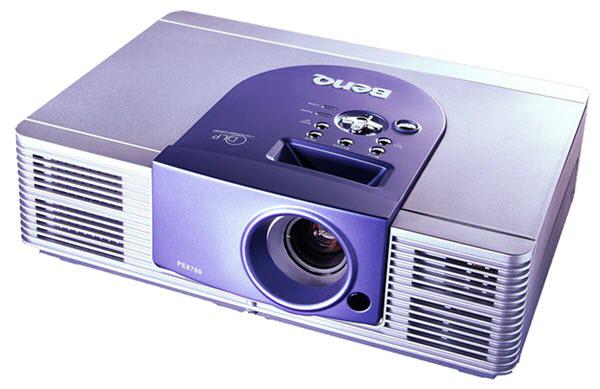 We first reviewed the BenQ PE8700 in September of last year. When first released the PE8700 featured the HD2 DLP chip. This spring, BenQ upgraded the unit to include the newer HD2+ chip, which is the same 1280x720 resolution, but higher in contrast than the HD2. At that time the contrast spec on the unit was raised from 2000:1 to 2500:1. Other than the upgraded DLP chip there was no other technical change made to the model. However we brought the new version in for another look, and thus offer this updated review.

BenQ did not change the model number to reflect the enhanced chip. All units with serial number 99J5877B2140300017H and higher contain the new, higher contrast HD2+ DLP chipset.

This model continues to be priced quite aggressively in the marketplace. At this writing the PE8700 is the lowest priced HD2+ projector available. Due to its remarkable price/performance it continues to maintain its place on our list of Highly Recommended Home Theater Projectors.

Unlike most projectors from BenQ, the PE8700 is clearly designed with home theater as its intended market. The upgraded HD2+ DLP chip generates marginally higher contrast than the original version, and the rated 1000 ANSI lumen output is ample for light-controlled home theater. The light engine uses a 6-segment, 5x speed color wheel. The engine is sealed to prevent light leakage and dust contamination. And features like picture-in-picture and picture-on-picture make it particularly consumer friendly. Physically it is a solid unit weighing 16.7 lbs.

Lens and throw distance. The PE8700 has a 1.2x manual zoom and focus lens with a relatively short throw distance. A 100" diagonal 16:9 image is obtained from as little as 10 feet and no more than 12 feet. That is good news for those with limited viewing space, and probably not so ideal for those with larger rooms that would prefer to mount the unit closer to the rear wall.

Lamp life. The lamp has a 2000-hour life. After 1950 hours of usage you are warned at power up to replace the lamp. When usage exceeds 2000 hours, the unit will not continue to operate normally until the lamp is replaced. There is no high brightness or eco mode on this unit.

Connector panel. The connector panel gives you three inputs in the "video group" and two in the "graphic group." The video group consists of one composite RCA, one S-video, and one set of three component RCAs for component interlaced input (no 480p available on this input). The graphic group gives you one DVI-I connector and a set of 5 BNCs for component interlaced, component progressive, HDTV, and computer input. The PIP and POP features let you select one signal from each group. (Thus you may not, for example, access the S-video input and the 3-RCA component port via PIP simultaneously.) The connector panel also incorporates an RS232c port and a 12-volt trigger.

Since you cannot feed 480p into the 3-RCA component port, you must use the BNC port for this signal. You can use a standard component video cable by attaching three RCA-to-BNC adapters to one end. These are cheap and available at Radio Shack or any local electronics store.

Remote control. The PE8700 has an easy to use remote. It is well back-lit and each button is labeled and easy to see in the dark. Separate source input buttons allow you to select your desire source without having to toggle sequentially through the options. Picture-in-picture (PIP), and picture-on-picture (POP) are both available on the remote, and the control includes the ability to resize the PIP image.

The remote also features five separate aspect ratio format buttons that let you select either anamorphic, standard 4:3 with side bars, "wide 4:3" that stretches the 4:3 image to fill the 16:9 screen, letterbox, and "through" which delivers a smaller native format image without scaling. (By the way, the wide 4:3 option expands the 4:3 image non-linearly along the horizontal axis. That means the left and right portions of the image are stretched while the center portion of the image retains its original aspect ratio. If you need to stretch the 4:3 image to fill the 16:9 frame, this is by far the best way to accomplish it.)

Brightness. After calibration we measured light output with 480p component inputs at 420 ANSI lumens, and with 480i component at 345 ANSI lumens. Realizing an incrementally bright picture via progressive scan input is typical for many digital projectors, as is the 20% differential we see on the PE8700.

Scaling and deinterlacing. In general the PE8700 delivers a sharp, stable image. Scaling and deinterlacing from the Silicon Image SI504 chipset are relatively clean and may be described as typical of this class of product. We see fewer motion artifacts when using 480p and bypassing the internal deinterlacer. The scaling of HDTV 1080i is very good and competitive, but not the best among the population of HD2+ products.

Geometry. We have seen some optical distortion on other units featuring the HD2 chips. The original unit reviewed displayed a perfect 16:9 image with precise 90-degree corners and no optical distortion. This unit has an extremely slight rounding on the upper edge, but it is insignificant compared to errors we have seen on competing units. Overall geometry on this unit is just about perfect.

Color accuracy is on par with many DLP products using the 6-segment color wheel. By that we mean that it is substantially better than most DLP projectors using the 4-segment wheel, but not perfect. There are no glaring errors. We found a subtle orange bias in the reds which is quite common. But in general flesh tones are natural and the projector can be calibrated to deliver a well-balanced image.

DVI input with DVD. On the PE8700 the cleanest possible image from DVD is derived from a DVD player or video scaler that upscales to 720p and outputs via DVI. This time around we tested it with the DVDO iScan HD video processor and got outstanding results. We would urge users of this projector to consider adding the iScan HD to their system. The incremental cost is manageable for most of those budgeting in this range for a projector, and the incremental picture quality and audio control that the iScan HD contributes makes for a superb overall system.

Audible noise. This unit's fan noise was low and comparable to many competing HD2+ projectors.

Overscan. Most video displays factor in a slight bit of overscan to ensure the entire screen is filled with the image. Ideally the edges of the image fall just barely off the screen with minimal loss of picture information. We found overscan tolerances to be just fine with component 480i input, losing less than 2% on both sides of the image. DVI input was of course perfect with the full overscan pattern visible and no image loss. However with component 480p input we found the projector was losing about 5% of the image on the right edge. Generally there is not much going on in this area of the picture, so the loss is not normally noticeable. However when there is subject matter that you know is supposed to be centered on the screen, such as a movie title perhaps, a 5% loss on the right edge is enough to make the title appear off center. We would encourage owners of this projector to use the DVI input anyway for best overall performance, and with DVI overscan errors are a non-issue. Nevertheless, for this projector the overscan loss in 480p is one more reason to get set up with DVI sources.

Currrently the BenQ PE8700 has an MSRP of $7,995. However it is selling for street prices below $5,000, making it clearly the least expensive of the HD2+ projectors on the market. At this price it continues to be an outstanding value.

For more detailed specifications and connections, check out our BenQ PE8700 projector page.