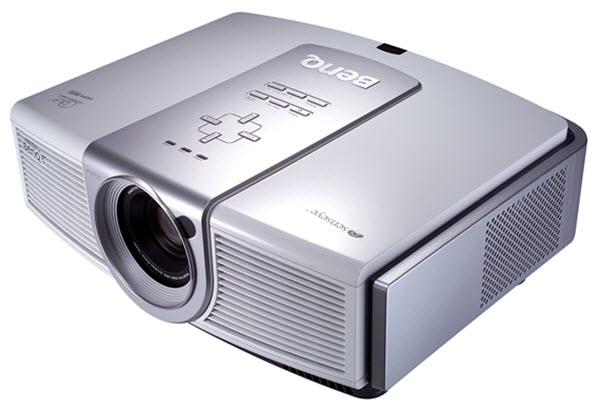 BenQ's latest projector has been in the works for some time. Announced at CES 2005 a year ago, the PE8720 started shipping in the fall. With a 10,000:1 contrast ratio and a super-high quality lens, the BenQ PE8720 can bring a dazzling picture into your home.

Connection Panel. One composite video, one S-Video, One set of standard YPbPr component video inputs, one set of 5 BNC component inputs that support YPbPr/RGB, one HDMI port, 1 12V relay, and one RS-232 port.

The BenQ PE8720 has a 5x rotation speed, 8-segment color wheel, which means that color separation artifacts should be a thing of the past for most people.

With a 1.35:1 powered zoom and focus lens, the PE8720 can be placed anywhere between 13.1 feet and 17.7 feet to produce a 100" diagonal 16:9 image. Since the recommended seating distance is at least 1.5x the screen width, or 11 feet, the projector can easily be placed at a comfortable distance behind the audience to minimize distractions.

When the powered zoom and focus is coupled with the PE8720's powered lens shift, the result is a projector that is truly easy to mount. As such, a rear shelf or ceiling mount requires less in the way of advance planning, as the projector can be placed in a wide vertical range as long as it is centered horizontally.

The projector's large but elegant white case is not just for show; its size functions to reduce ambient noise to near-silence. It also helps "lose" the projector against the ceiling when mounting, which is not easy to do with a 20 pound projector.

The PE8720's "Whisper Mode" reduces noise even further, and is so named because the ambient noise drops to the level of a human whisper - approximately 23dB. This is among the quietest projectors we have come across in recent memory, and you can be sure that audible noise will not be a problem, regardless of your setup.

The menu system is clean and elegant, and reminiscent of the menus on the PE7700. While it does take up a fair amount of screen space when fully expanded, it can be moved from the center of the screen (default) to any corner. Included are several options for color adjustment, which can get confusing with regards to their purpose, so we will take the time to explain them here:

First of all, it is important to note that despite the three different color adjustment locations on the PE8720, each does something different. Under "Extended Picture Settings" is the general independent color adjustment, which will boost or drop R/G/B/Y without affecting white balance - i.e. a saturation control for each color. Under "White Balance Fine Tuning" in the Advanced menu, you find the place to actually change color temperature and white balance. This is the form of color adjustment that most users are probably familiar with, and likewise the most useful for calibrating your projector. Finally, "3D Color Management" is a more in-depth version of the Extended Picture Settings, featuring hue and saturation controls for RGBCMY. Again, according to BenQ this does not change the image's white balance, and so it is best suited for times when a specific color does not look perfect while the rest of the image is acceptable. This sort of redundancy would be acceptable if there was sufficient documentation in the user manual, which there is not. As it stands, without documentation these features are unnecessarily confusing.

The PE8720 includes several precalibrated color profiles, tailored to different viewing environments. "Cinema" and "Home Theater" modes are good choices for a dedicated theater room with little to no ambient light, and provide the best balance of lumen output, contrast, and color performance - but it is by no means perfect, and requires some tuning to reach optimum performance.

The remote is large, with buttons widely-spaced and easy to read. The bright orange backlight is activated by the large "LIGHT" button at the base of the remote, which was very easy to find in the dark. Direct-access buttons are included for all of the projectors basic functions, allowing you to bypass the menu in most cases - these buttons include each source, zoom, focus, and lens shift, and basic image adjustments. As it stands, the remote includes enough functions to be convenient without crossing the line into unnecessary complication.

The BenQ PE8720 is rated at 1000 ANSI lumens. Clocking in at 340 ANSI lumens in high lamp mode and 260 ANSI lumens in low lamp mode when optimized for dark room home theater use, the PE8720 puts out more than enough light to power a fairly large screen, and a screen size between 90" and 120" diagonal would be ideal.

During testing, we chose to set the iris approximately 2/3 of the way shut, which provided a nice balance between lumen output and contrast performance. With the iris closed down it its minimum aperture, the PE8720 still put out enough light to power a 100" screen easily, though going any larger than 100" diagonal would be difficult in anything other than a completely and totally dark room. With the iris at its maximum aperture, lumen output was greatly increased, but contrast suffered. For optimum contrast, keep the iris at the lowest setting possible considering your screen size and lighting conditions.

The PE8720 earns bragging rights in the realm of contrast and black level. Black level on the PE8720 is excellent, and among the best we've seen recently on a digital projector. Shadow detail is likewise quite good, with clear differentiation of the grayscale all the way from 0 IRE to 100 IRE and no crushing in evidence. This means that even the darkest of dark scenes in DVDs or HD content are a pleasure to watch on the PE8720.

Color performance is outstanding, though the test unit we received was biased towards green. It turns out that our test unit was produced very early in the PE8720's manufacturing run, and after a firmware update the color balance was much more natural. Once updated and calibrated, the PE8720 measured close to 6500 Kelvin from 20 IRE to 80 IRE (0, 10, 90, and 100 IRE showed slightly more color bias - a tinge of red at the low end of the spectrum and blue at the high end). Colors are rich and vibrant, and the projected image from our test unit showed plenty of three-dimensionality. Should you purchase the PE8720 and experience such a color bias, we would recommend that you first contact BenQ about a firmware update, and then seriously consider hiring a professional to calibrate your projector to ISF standards.

The PE8720's video processing is first-rate. When we fed the projector a component video signal at 480i, there was nary a deinterlacing artifact in sight. Lines are clean and smooth, even on very difficult scenes. Likewise, when scaling a 480-line signal up to the projector's native 720 lines, the image retained its sharpness, and there was no evidence of blurriness around the edges of objects.

While part of this sharpness can be attributed to the BenQ PE8720's video processing, some of it is due to the lens assembly. BenQ has included a very high quality lens in the PE8720, which helps to ensure good edge-to-edge sharpness and overall picture clarity.

High-Definition signals can really strut their stuff on the PE8720. 720p and 1080i material looks outstanding on our test unit, and the "through the window" effect - the feeling that watching High Definition is like looking through a window rather than watching a screen - is clearly evident. High definition signals from an Xbox game console also look spectacular. When using video game systems, you may want to open up the iris a few more steps - the extra lumen output can help in this situation.

The BenQ PE8720 is a premium class projector that is available for less than a premium class price. Overall performance is excellent, and the feature set is nothing to sneeze at. With the iris set optimally, black level on the PE8720 is deep and inky, and the shadow detail makes for a very three-dimensional image that seems to pop from the screen. Deinterlacing and scaling quality is excellent, and the picture is smooth and pleasant to watch.

It is difficult to assign a 5-star "value" rating for this model, for it falls between two classes of 720p resolution products. Compared to the high end 720p models from the boutique brands that sell for $12,000 and up, the PE8720 is an absolute steal--virtually comparable picture quality for half the price or less. If this was the only competition, the PE8720 would get 5 stars for value hands down. On the other hand, the PE8720's street prices of around $6,000 make it substantially more expensive than the economy range 720p projectors selling for under $3,000. Though the PE8720 will outperform them in contrast and image sharpness, the lower priced units have gotten really good lately, and some buyers may understandably think that the incremental image quality you get from the PE8720 is not worth double the price. So this has been factored into the overall value rating.

Setting aside the cost issue, the BenQ PE8720 is a sheer pleasure to watch, and an elegant centerpiece for any home theater.

For more detailed specifications and connections, check out our BenQ PE8720 projector page.