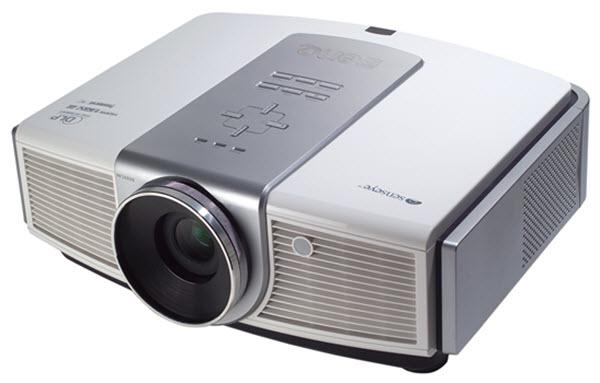 (Correction: We originally reported that the W20000 had two HDMI 1.3 inputs, when the inputs are actually HDMI 1.2. We have corrected this statement and it does not affect our rating of this product. -bl 4/25/08)

Last month's review of the BenQ W5000 made it clear that BenQ was back in the home theater projector game in a big way. This month, we take a look at the BenQ W20000, a DLP 1080p powerhouse with spectacular contrast and true to life color. The W20000 has a bright, vibrant picture coupled with sharp details and inky black levels. It is currently selling for $4,999.

Extremely sharp picture. The BenQ W20000 has the sort of razor-sharp clarity that can make other 1080p projectors look soft in comparison. Every single detail in every single frame jumps out at the viewer in full resolution. This is especially wonderful when watching nature programming such as Discovery HD Theater, where there is always an abundance of fine detail. This extreme sharpness can, however, make the W20000 seem a bit "artificial" when compared to some other projectors, mostly when viewing film content. 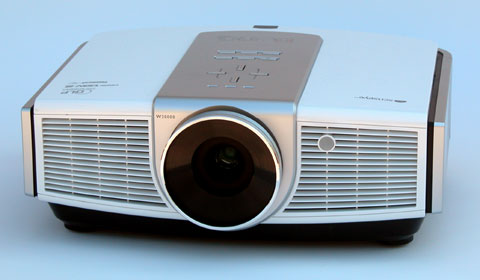 Excellent color. After some adjustment, the BenQ W20000 tracks very close to the ideal 6500K across the entire grayscale. Our test unit required a boost to both red gain and offset, and a decrease of two to three points to blue and green gain and offset. After this adjustment, the W20000 was nearly perfect from 30 IRE to 80 IRE, absolutely perfect at 90 IRE, and slightly too cold at 100 IRE (about 6900K). All in all, the color accuracy contributes to a vibrant, life-like picture that is true to the source material.

High lumen output. In "Standard" image mode with the lamp on high and the iris open, the W20000 measured 621 ANSI lumens. Low lamp mode causes a 15% drop in lumen output to 528 lumens. "Cinema" mode measured 511 lumens in high lamp mode, and "Dynamic" mode measured 505 lumens. The W20000 also has a manual iris, which cuts lumen output by 32% when fully closed. This gives the projector an impressive range, making it adaptable to rooms with moderate ambient light or darkened theater environments.

Quiet operation. The W20000 is a large projector, weighing in at over twenty pounds. It uses a 200-watt lamp, which is lower wattage than some other DLP projectors of similar lumen output. With its large case you end up with a quiet projector. In high lamp mode, the projector is only noticeable within a five foot radius, while it is nearly silent in low lamp mode.

Dual-iris system. In addition to the manual iris mentioned earlier, the W20000 also has an automatic iris. This auto iris is activated by turning on the "DynamicBlack" option in the menu system, and can lower black levels in dark scenes without compromising lumen output in brighter ones. During normal viewing of video we did not notice any unnatural dimming or brightening effects attributable to the auto iris, and adjustments were invisible to our eyes unless we were actively looking for them.

Great ANSI contrast. The BenQ W20000 measured 560:1 ANSI contrast during our testing, which is the highest reading we've seen on any projector since we began testing for ANSI contrast. Full On/Off contrast with the auto iris active measured 8800:1. This does not necessarily translate into a clear, perceptible advantage over other projectors, but it has the potential to do so in a dark viewing environment. Nevertheless, the real-world contrast performance from the W20000 is excellent by any measure.

Good connectivity. The W20000 has a nicely featured connection panel, with two HDMI 1.2 inputs, YPbPr component inputs, the standard composite and s-video, RS-232C for external control, a 12v trigger for motorized screens or an anamorphic lens, and five BNC connectors. This gives you four viable inputs for high definition sources, as the BNC connectors can be used for component video or RGBHV data signals.

Limited zoom. It's a fact of life that DLP projectors generally have shorter zoom ranges than their LCD counterparts. The W20000's 1.2:1 zoom certainly fits that pattern. It is a moderate throw lens, projecting a 100" diagonal 16:9 image from 13'5" to 16'1". This, along with its lens shift capability, means a rear shelf mount will be a possibility for many users. Be sure to visit the Projection Calculator before taking the plunge to make sure the W20000 will work in your theater.

Digital noise. The W20000, like the W5000, has more digital noise than some of its competitors. This manifests as the appearance of dancing motion and graininess in solid colors. It is more intense when BrilliantColor is active, but does not completely disappear even when BrilliantColor is not in use. Noise artifacts are the single most evident flaw in the picture. Some people are annoyed by the presence of digital noise, and some find it fairly easy to ignore.

Cinema Mode. During our testing, it became apparent that the W20000 had a gamma problem in Cinema mode. Shadows were over-emphasized, while highlights sometimes suffered a lack of separation. There does not seem to be a way to correct this issue, as the onboard gamma adjustments did not correct the problem. Accordingly, we used Standard mode in the majority of our testing, since it manifests a much more accurate gamma curve. We got the best overall picture by starting with Standard mode and performing color calibration adjustments from there.

The BenQ W20000 is a large projector with impressive black levels and great color, so putting it head to head with the JVC DLA-RS2 makes for an interesting match-up. Putting these two great projectors together, we learn that the numbers sometimes only tell part of the story -- and sometimes they're not telling the same story at all.

Brightness. On paper, the W20000 and the RS2 have nearly identical lumen output. In practice, this is only true for a 100 IRE white screen. When viewing normal film content, which can involve shadows and colors, the RS2 consistently looked brighter than the W20000. Since 100 IRE white screens rarely make appearances in film and video, the RS2 takes this category.

Contrast. In our contrast tent, the JVC RS2 measured over 13,000:1 on/off contrast, and 209:1 ANSI contrast. The W20000, on the other hand, measured 8800:1 on/off and 560:1 ANSI contrast. The higher ANSI contrast number suggests that the W20000 should actually appear higher in contrast, but that is not what we saw on the screen. Due to the RS2's perceived higher brightness and the absence of a perfectly dark space, the RS2 did appear in most scenes to be higher in contrast. However, in some scenes the W20000 showed greater contrast. The RS2 has a significantly deeper black level when scenes fade to black, or with title material against a black background. But considering the whole range of viewing experience, there is not a huge difference in overall contrast between the two models. Each has advantages over the other in given scenes.

Sharpness. Out of the box, every single detail on the W20000 appears extremely sharp, but this is due to the fact that edge enhancement is overdriven by default. At this setting, the W20000 looks sharper than the RS2, but it also looks more artificial. After disabling the sharpness enhancement features, the two projectors are much closer, though the W20000 still has a subtle advantage. Some people will prefer the image from the RS2, as it looks more film-like. In the end, the two models are very close in sharpness, but the BenQ W20000 has a slight edge.

Placement Flexibility. The RS2's 2:1 zoom and H/V lens shift put it head and shoulders above the W20000's 1.2:1 zoom and vertical shift. The long zoom range on the RS2 adds flexibility for rear shelf installation in a greater variety of room sizes, which makes setup fast and easy. The RS2 also has a vertical shift range of three picture heights, as opposed to two on the W20000. However, keep in mind that using the long end of the RS2's zoom lens will curtail light output. This may or may not be a real limitation depending on the operating mode you choose, and the size and gain of the screen you are installing.

Price. Perhaps the most remarkable aspect of the BenQ W20000 is that it approaches the performance of the JVC RS2, yet costs only $4,999 with a three year warranty (for reference, the RS2 is $7,995 with a two year warranty). Yes, there are some sacrifices made, but ultimately the W20000 offers great performance for much less money.

The BenQ W20000 offers most of the performance of higher-end models without the bank-breaking price tag. This bright, high contrast projector combines accurate color with deep blacks, sparkling highlights, and quiet operation with a very sharp image and a reasonable price tag. The W20000's image can appear noisy at times, and placement flexibility is less comprehensive than that of competing units, so it's not a projector that will work for everyone. However, if you can work around or look past its limitations, the BenQ W20000 is a great value.

For more detailed specifications and connections, check out our BenQ W20000 projector page.