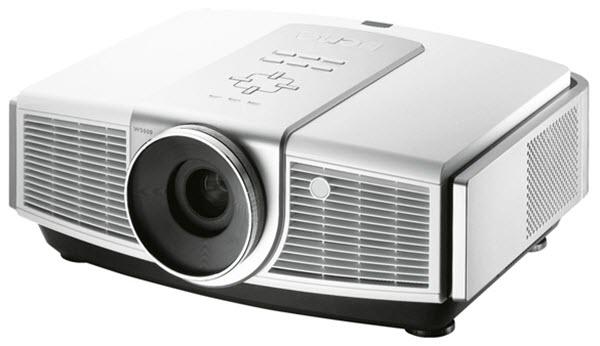 The new BenQ W5000 home theater projector starts shipping this month. This 1080p resolution, single-chip DLP projector, delivers an extremely sharp, high contrast image. It is priced at $4,995, which is somewhat higher than a number of competitive 1080p projectors on the market at this time. However, it comes through with a dazzling picture that justifies the price.

Excellent contrast and black level. Don't let the 10,000:1 contrast rating fool you. That is a relatively low number in today's competitive market where contrast specifications range from 15,000:1 up to 50,000:1. But in any given scene, the real contrast you experience on the W5000 is in many instances higher than that of competing models with much higher contrast ratings.

Extremely sharp image. The W5000 is more razor sharp than any 1080p product we've seen yet. This is particularly apparent in close-up facial images, where every imperfection in the skin is resolved in extraordinary detail. The projector's sharpness may be attributed in part to exceptionally high optical precision in the lens. 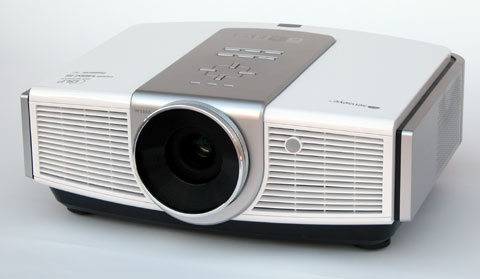 Three-dimensional image. The high native contrast and exceptional sharpness combine to produce a visual depth, or apparent three-dimensionality, that is well above average as compared to other 1080p models on the market today.

Bright in Brilliant Color mode. There are two options for Brilliant Color, on or off, and the setting you choose has a large impact on light output. When it is on, the ANSI lumen output in Cinema mode ranges from 350 lumens to 600 lumens depending upon where you set the manual iris. Thus it is brighter than average when compared to other home theater projectors. However, turning Brilliant Color off reduces average lumen output by about about 32% in the highlights and 50% in mid-tones. The advantage of turning Brilliant Color off is that it makes digital noise levels much less apparent in scenes that are particularly susceptible to noise. This is a key trade-off, and the user will make a decision to run with Brilliant Color either on or off depending on screen size and gain, ambient light, and the viewer's sensitivity to noise artifacts.

1.2x zoom range, vertical lens shift of two picture heights. The excellent optical quality of the W5000's lens contributes to the extreme sharpness and three-dimensionality of the image. However, part of the reason the lens is so good is that it has fewer internal elements to achieve long zoom. So there is relatively little leeway in throw distance to obtain any desired screen size. If you want a 120" screen, for example, the projector needs to be at least 16 feet and not more than about 19 feet from the screen. For rooms that are about 17.5 to 20.5 feet in depth, a rear shelf placement works perfectly for a 120" screen. But if your room is deeper than that, your choices are to mount it on a rear shelf and go with a larger screen, or ceiling mount the projector. On the other hand, if your room is less than about 17.5 feet in depth, you must either go with a smaller screen size, or consider a different projector with a shorter throw lens.

The vertical lens shift of two picture heights is perfectly adequate for almost all rear shelf mounted installations. If you ceiling mount, you may find that a drop tube is required in order to avoid tilting it and using keystone to square up the image.

Noise in Brilliant Color mode. The most obvious artifact on the W5000 is a relatively high level of noise compared to competing units. Noise levels are particularly apparent when Brilliant Color is activated, and noticeably subdued when it is not.

Short IR range on the remote. When using a 120" screen and sitting at a distance of about 12 feet (probably not atypical of a normal home theater set-up for this model), the projector would not respond to the remote when bounced from the screen. We had to point the remote directly behind us at the projector to get it to respond.

The W5000 and the Epson Pro Cinema 1080 UB are two formidable 1080p projectors in the same general price range. Each has a number of strengths relative to the other. Among the W5000's most salient advantages over the Epson are these:

* Higher native contrast. Though the Cinema 1080 UB is rated at 50,000:1, the W5000 has greater dynamic range in any given scene. This is most evident in high contrast scenes, such as night scenes with bright lights. In such a scene the W5000 produces deeper blacks and brighter highlights.

* Sharper image. Though the Cinema 1080 UB is a sharp projector, the W5000 pushes image sharpness even further with its high performance optics.

* Less motion blur. DLP technology has an inherent advantage over LCD in motion blurring. In scenes where there is rapid motion, both look equally blurred, and in scenes where there is relatiely slow motion there is no blur on either one. But in scenes in which objects move across the screen at a moderate speed, the W5000 is able to hold the clarity of details more precisely than the Cinema 1080 UB.

* More three-dimensional image. As noted previously, with better native contrast and an incrementally sharper picture, there is a greater apparent visual depth to the W5000's image when these two projectors are seen side by side.

Meanwhile, the Epson Pro Cinema 1080 UB has several advantages of its own:

* Less noise. Even with the noise filter off, the Cinema 1080 UB shows less noise than does the W5000. The difference is particularly noticeable when the W5000's Brilliant Color is active. Thus, in terms of overall picture quality, users who place high value on contrast and image sharpness and are willing to live with a bit more noise to get it, will prefer the W5000. On the other hand, users who are bothered by the dancing effects of noise in solids and highlights, and who are willing to give up some contrast and image sharpness in exchange for fewer noise artifacts will prefer the Cinema 1080 UB.

* Greater installation flexibility. The Cinema 1080 UB has a 2.1x zoom lens, three full picture heights of vertical lens shift, and some horizontal lens shift as well. The W5000 has a 1.2x zoom range, two picture heights of vertical shift, and no horizontal shift. The bottom line is that it is much easier to install the Cinema 1080 UB in a variety of rooms with different dimensions and ceiling heights.

* Less expensive. Not only is the Cinema 1080 UB retail price lower than the W5000 by $1000, but its price includes a three year warranty and a ceiling mount. The W5000 comes only with a one year warranty. As always, check actual street prices on any model you are looking at, since official retail prices are often poor indicators of the actual price you'll need to pay.

The W5000 and Cinema 1080 UB share some common features. Both are compatible with 1080p/24, although that did not show up in the W5000's published specs. Both have air filters that require periodic maintenance. They have comparable lumen output in optimized Cinema modes, and comparable fan noise, which in both cases is low.

Connectivity is almost identical on the two models. Each has two HDMI ports, one 3-RCA component, one S-video, one composite, and a 12-volt trigger. The only difference is that in addition to these, the W5000 offers a 5-BNC port, whereas the Cinema 1080 UB has a standard VGA port instead.

Both of out test units had a greenish bias at factory defaults, and required some calibration work to get them tuned up. If you are investing this kind of cash in a home theater projector, you will most likely benefit from having it professionally adjusted for best performance in your environment, and with your particular screen.

As I think about these two models and view them side by side, it is difficult to say one is "better" than the other. They are both great projectors, but they are definitely different. The W5000 produces an image that is incrementally more dramatic due to its advantages in native contrast and image sharpness. On the other hand, the Cinema 1080 UB could be described as more filmlike due to a lower noise level and slightly smoother image.

This means that there will be lively debate among people viewing them side by side as to which one is the best. Ultimately, if picture quality alone is driving the decision, it comes down to a personal preference as to what is most important to you in an image. The Benq W5000 is built for those who value high contrast and a razor sharp image above all else. There are certainly quite a few users out there who fit that description. If you are among them, and the W5000 can be either ceiling mounted or shelf mounted in your viewing space without a problem, then the BenQ W5000 is an outstanding choice.

For more detailed specifications and connections, check out our BenQ W5000 projector page.