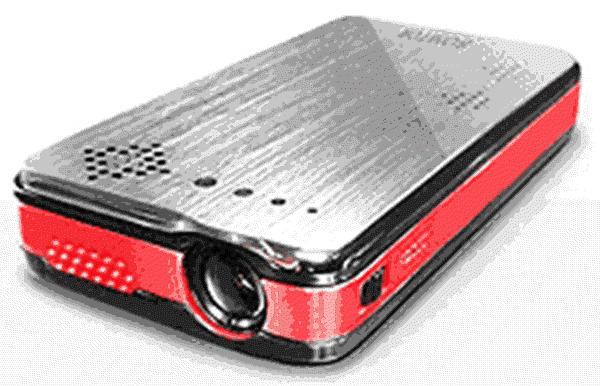 The Bonitor MP201 pocket projector is capable of projecting images in nearly any situation - with the ability to hold it in the palm of your hand, you can project a "big screen" image on almost any surface. I found the MP201 useful in mobile situations - such as in a car or while on transit on a plane and train - when used along with an iPod as the video source. The MP201 features a long-lasting battery and built in stereo speakers that are capable of producing relatively impressive sound levels. It is illuminated by a LED light source that is rated to last 30,000 hours - at 6 hours of use each day, that amounts to a 14-year life span. Available directly from the Bonitor web site for $249, the MP201 is a true plug in play device - while it does not have an on-screen menu or picture adjustment settings, it is capable of producing quality images many times the size of the average portable media player.

Audio Capabilities: The audio output of the MP201 is rated at 0.5W. While the audio output lacks any appreciable bass, the sound level that this unit can produce is beyond expectations for a projector in this size. The audio output is enough to overcome a moderate amount of ambient noise and would be useful when sharing videos with a small group. For larger group situations or where ambient noise is a factor, you will want to plan on using external speakers.

Battery Life: Bonitor rates the non-user accessible 2500mAh li-ion battery for 2 hours of continuous run time. In testing with a fully charged battery, the MP201 averaged a run time of slightly over 90 minutes. While not quite meeting the specified value of run time on battery power, this performance is significantly better - close to twice the run time - of similar projectors in this class. The MP201 power input utilizes a micro USB connector. Using a micro-USB cable connected to a laptop, I was able to charge the projector but was not able to operate the projector when connected to the USB port, likely due to the limited current available over USB.

The native resolution of 640x480 is above average for projectors in this class and helps the MP201produce images that are nicely detailed. The high fill ratio of the LCOS imaging chip makes individual pixels almost impossible to see even with large image sizes. The result is a very smooth and natural looking image.

Cost of Ownership: The Bonitor MP201 provides a fully functional display device that requires zero additional cost over the life of the unit - the LED life span of 30,000 hours equates to thousands of dollars in replacement bulb cost for standard projectors.

Brightness: The light output of our test unit was measured at 6.6 ANSI-lumens compared to the specification of 15 ANSI-lumens. While the brightness performance of this projector is not sufficient to replace a dedicated display in a fixed environment, the light output of this projector compares well to other projectors in this class. Six lumens of brightness will present some limitations to image size, however, it is sufficient to project highly viewable images when the screen size is kept in relation to the viewing environment. In situations with some ambient light present, I used a standard 8.5x11 inch sheet of paper as a portable screen. Keeping the image size confined to the 8.5-inch width of the paper screen produced an image of 19.2 ft-lamberts (assuming a unity surface gain). Images at this brightness level are viewable with moderate amount of ambient lighting; however, care should be taken to avoid any light directly hitting the screen.

In a completely dark environment, the MP201 could produce images of subjectively acceptable quality up to a 30-35 inch image width. Additionally, I was able produce a watchable image of up to 81" diagonal while maintaining acceptable image focus. This is actually slightly above the Bonitor's specification of a max image size of 75.2".

Picture Adjustments: The MP201 does not have any type of on-screen menu or the ability to adjust picture attributes. The only physical buttons on the projector are an on-off switch and a focus dial. The ability to adjust basic brightness and contrast setting would help to increase the overall image quality of the MP201, as the images displayed by the default settings are slightly washed out with elevated black levels. While a higher black level setting will make the projector look brighter, user accessible settings to fine tune the projector to the viewing environment would be a welcome addition. The MP201's color reproduction is not noticeably limited by the elevated black level, as the projector is able to produce accurate flesh tones and relatively saturated colors.

Input Options: MP201 will only accept a composite video signal, over various cable adapters that plug into the 2.5 mm input jack on the MP201's rear face. Therefore, the MP201 cannot be used as a computer display, which is a feature on the Bonitor MP301 projector.

Sporting a sleek industrial type case design of brushed aluminum, the Bonitor MP201 is a highly portable projector about the size of an average cell phone that is available for under $250. While limited by only a composite video input, with the Bonitor MP201 and a portable video source, one can take the big screen experience anywhere. The overall picture quality will depend on the image size and the amount of ambient light in the viewing environment, but the MP201 is quite capable of an impressive image large enough to be enjoyed by more than one person at a time. It would be an ideal fit for a user who seeks a screen experience significantly larger than what is possible with a portable video source alone.


For more detailed specifications and connections, check out our Bonitor MP201 projector page.

Comments (3) Post a Comment
Anthony Posted Jan 16, 2010 9:59 AM PST
What kind of external speakers would be best for this projector?
Anthony Posted Apr 25, 2010 12:27 PM PST
Is this projector compatible with a bluray player? It says this on the bonitor website, but I've been told it isn't and HD projector and will have no affect on the image.
doris plorpbloft Posted Oct 19, 2011 11:43 AM PST
you could cause alot of greif with one of these.i might have to buy one