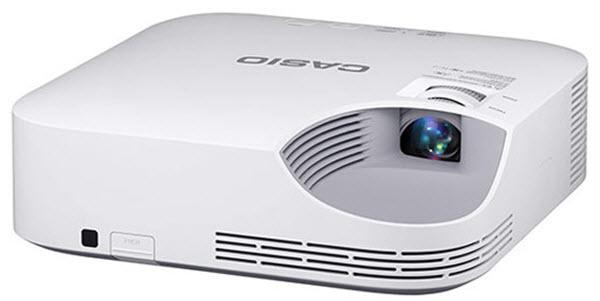 The Casio XJ-V2 appears to be designed for a specific purpose -- to give low total cost of ownership for those who need to project 4:3 data images for 10,000 hours or more. This 3000-lumen XGA resolution projector is priced at $699, quite a bit more than the average cost of today's 3000-lumen XGA projectors. But the big difference is its 20,000 hour LED/Laser light source which eliminates the need to buy replacement lamps over time.

The XJ-V2 also offers Casio's usual constellation of features for keeping running costs down. Five Eco levels plus two non-Eco modes let you minimize electric bills by picking the lowest brightness you need. The bottom line -- you pay more up front to get lower power bills and no replacement lamp costs in the long run. For those who anticipate putting 10,000 hours or more on their projector, this can add up to a significant savings over the years.

The Casio XJ-V2 is also designed with an emphasis on looking good. The rounded corners; the compact, squarish shape; the two-tone white and gray color; and the lens position--set back from the front in a scooped out area on the left top corner--suggest a serious investment in an industrial designer. If the goal was to make the XJ-V2 attractive enough to leave sitting on a conference room table in an office where decor matters, it succeeds nicely.

Data Projection. Data presentation is the XJ-V2's forte, as you'd expect from any 4:3 aspect ratio projector. When projecting an XGA resolution data source the XJ-V2 holds detail well. With black text on a white background, 8 point text is highly readable while 6 point text breaks up slightly. On the other hand, if you project white text on black it doesn't do quite as well; 11 point text is crisp and readable with characters beginning to break up at 9 points.

Test images designed to reveal pixel jitter and moire patterns didn't show any jitter at all with an analog VGA connection, but there was some obvious moire. However, unless you use patterned fills in your graphics instead of solid blocks of color, you'll probably never see moire. If you do, you can eliminate it by switching to an HDMI connection. 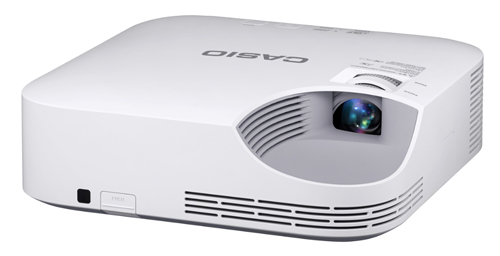 With Eco off, there's no choice of color presets. You can only choose between Bright and Normal lamp modes. With Eco on, you can choose any of five Eco levels with five Color presets for each: Standard, Graphics, Theater, Blackboard, and Natural.

Color in general is suitably eye-catching and nicely saturated in all modes, although color quality varies from good to near-excellent, depending on the mode. In particular, the non-Eco modes and most of the color presets have enough of a difference between white brightness and color brightness to give at least some colors a dull, dark look, while some modes deliver some colors that lean towards pastel. However every mode includes colors that look vibrant, and all brightness modes as well as all presets work well for business graphics and similar images.

Video Presentation. Since this is a 4:3 format projector, few would buy it for extensive video use. However it is capable of displaying reasonably good video, especially in Blackboard mode which is low in total lumen output but better in color saturation than the brighter operating modes. Blackboard mode loses shadow detail in darkly lit scenes, but you can switch to Theater mode for a substantial improvement in shadow detail at the cost of a slight shift in color balance toward green.

Rainbow artifacts are typical in this class of DLP projector, though they are not a problem in data presentation. However with video, I saw them often enough in dark scenes and in a black and white clip that anyone who sees them easily may find them annoying. Rainbow artifacts appear less often in well-lit scenes. In short, the video picture is by no means home theater quality, but quite serviceable for occasional classroom and conference room video display.

Eco friendly. The XJ-V2 offers an assortment of features that help make it eco-friendly compared to most projectors, ranging from lower power use than most to eliminating the carbon costs for shipping replacement lamps by eliminating the need for replacements.

Low total cost of ownership. The initial price for the XJ-V2 is high compared with its competition, but if you expect to use it heavily enough, the running costs are low enough to make it cheaper than a less-expensive model in the long run. Not only does the 20,000-hour lifetime for the LED-laser light source eliminate the cost of replacement lamps, but with two non-Eco and five Eco modes, you can choose the lowest brightness you need for the ambient light and screen size, which can make a significant difference in power use. I measured the two non-Eco modes at 163 and 133 watts and the Eco modes at a range of 104 to just 56 watts.

Quick startup. Unlike conventional lamps, the solid state light source in the XJ-V2 goes from power on to full brightness in just a few seconds, making it ready to use for a presentation almost immediately after turning it on.

Quick shutdown. The light source also shuts down almost immediately after powering it down, eliminating the wait for a fan to cool down the lamp before you can more the projector or pack it up at the end of a presentation.

Security. The menu offers password protection, and there's a Kensington lock slot on the back.

Warranty. The warranty covers three-years for parts and labor, which is longer than typical, and five-years or 10,000 hours (whichever comes first) for the light source. That works out to 8 hours per day, 5 days per week, for five years.

Brightness. With two non-Eco lamp modes, five Eco modes, and five color presets, the XJ-V2 offers brightness levels ranging from a high of 2577 lumens, or 86% of its rating, to just 531 lumens. With the zoom lens at its widest angle setting the lumen readings were as follows:

Zoom Lens Effect. With only a 1.1x zoom, there's no significant difference in brightness at the maximum telephoto setting.

Color brightness. We measured the XJ-V2's color brightness at 65% of its white brightness in its Bright lamp mode and with its Standard color preset, which is enough to explain why some colors look dull and dark. The lower color brightness will also translate to full color images not being as bright as you would expect from the 3000-lumen rating. Color brightness for Blackboard mode was 93% of the white brightness, which is consistent with its delivering the best color quality. Rainbow artifacts show only rarely with static data images. However, they show often enough with video, particularly in dark scenes, that anyone who sees them easily may find them annoying.

Fan noise. The fan volume and pitch rises noticeably at each step up in power use. Eco level 5 is quiet enough that I can't imagine anyone being bothered by it. The Bright non-Eco mode is loud enough and high-pitched enough that I wouldn't want to sit next to the projector at a conference room table, even though I'm generally comfortable with white noise.

Input lag. Lag as measured by the Bodnar meter was 33 ms.

Lamp life. The lamp is designed to last the life of the projector, with a 20,000 hour rating.

The XJ-V2 can throw a 120" 4:3 image from a range of 12' 4" at its widest angle setting to 13' 9" at its full telephoto setting. The Projection Calculator will let you determine the range for your preferred screen size.

With the projector on a table, the lens offset positions the bottom of the image a little more than 20% of the image height above the midline of the lens, or roughly 16" above the midline for a 120" image. This will work nicely for placing the projector either on a table below the screen or inverted in a ceiling mount above it. If you need to tilt the projector, you can correct for up to plus or minus 30 degrees with the manual keystone control. There is no horizontal or automatic keystone correction.

As with any projector, be sure to plan for lamp degradation. Casio claims that its LED-laser light source degrades at a nearly constant rate and over a much longer period than high-pressure lamps, but it still degrades over time. 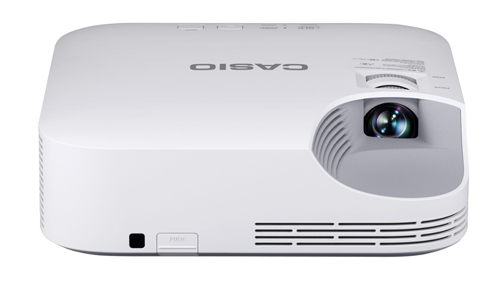 Whether you plan to use the XJ-V2 as a portable or permanently install it, make sure it's initially bright enough for the ambient light and screen size even with one of the lower-brightness Eco modes. As the lamp ages, you can switch to higher-brightness Eco modes and eventually a non-Eco mode. If keeping colors constant over time isn't critical, you can also make sure one of the lower-brightness preset color modes is bright enough to start with, and then switch to brighter modes as the lamp ages.

Zoom. The 1.1x zoom offers very little flexibility for how far you can put the projector from the screen for a given size image.

Rainbow artifacts. Although rainbow artifacts aren't an issue for data presentations, they show often enough with video to make the XJ-V2 best limited to short clips.

No control panel. Lose the remote and you can only turn the XJ-V2 on and off and change the image source.

No speaker. The XJ-V2 lacks a speaker. However, you can route audio through the projector to control volume with the remote.

No monitor loop-through. In the event you need it, look elsewhere.

No MHL or Wireless compatibility. Limits the ability to connect smartphones and tablets.

The Casio XJ-V2 value proposition is simple - by eliminating replacement lamp costs and reducing power usage, your total cost of operation will be lower in the long run. This projector will also appeal to anyone who gives extra points for ecologically-friendly features like the mercury-free light source and multiple Eco levels to optimally reduce power draw. Beyond that, it is a beautiful projector, sporting an artistically appealing industrial design.

It is difficult to assess value on a projector like this because the value depends entirely on the total anticipated hours of usage. If you won't put more than 5000 hours on the unit before upgrading or replacing, the 20,000 hour light engine won't be as great a value. But if you anticipate running 10,000 hours and up, the value proposition becomes much more attractive. So if you expect long hours of usage and you buy based on long term operational costs rather than up front cash layouts, it is worth running the numbers. The Casio XJ-V2 might very well be the smartest long term solution for your classrooms or conference rooms.


For more detailed specifications and connections, check out our Casio XJ-V2 projector page.

Comments (1) Post a Comment
Russell Posted Oct 15, 2016 10:42 PM PST
Hi, Nice review of the Casio xj-v2 projector. Will this be a good choice to connect a set top box and use it like a television. I want a long lasting and low maintenance projector for this very reason. Usage will be continuous 6 to 8 hours every day.