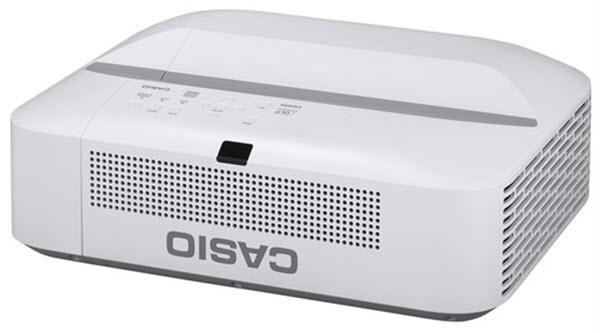 Built around Casio's hybrid LED-laser light source, the XJ-UT310WN is the company's first model with an ultra short throw. The $1,799.99 price may seem high for a 1280x800 model rated at 3100 lumens, but don't let that stop you from considering it. The price is at least potentially justified by a low running cost.

The light source, with its 20,000-hour rated lifetime, is meant to last the life of the projector, so you don't have to buy replacements. In addition, five levels of Eco mode let you choose just the right brightness, so you'll use only as much electricity as you need. Casio says that the combination gives the projector a lower total cost of ownership than less expensive competition. At the very least, it will keep running costs down.

In most other ways, the XJ-UT310WN is absolutely typical. It's built around a DLP chip, it delivers near-excellent data image quality, and it can give you a big image with very little throw distance--delivering a 92" diagonal image in my tests from just 14". If you need an ultra short throw projector, it's certainly worth a look.

The XJ-UT310WN does a much better job with data images like word processing and graphics than with video. The key problem is rainbow artifacts (red-green-blue flashes), which are always a potential problem for DLP projectors. With static images, I saw almost none. With video, I saw them often enough to make them potentially annoying.

Near-excellent data image quality. Colors in data images were eye catching and well saturated in all combinations of predefined modes and brightness levels in my tests. However, there was some color variance from one predefined mode to the next. Blue, for example, was dark in some modes and pastel blue in others.

Similarly, the projector did a good, but not great, job with color balance. I saw some minor tints in the brightest shades with the two brightest settings, but the same is true for most projectors. With all other settings, grays were suitably neutral across the board.

More important for data images is that the XJ-UT310WN did an excellent job maintaining crisp focus across the screen, which isn't always true for ultra short throw projectors. It also did a good job holding detail. Both white text on black and black text on white were crisp and readable at sizes as small as 7 points. I saw some moderate dynamic moire with an analog connection on images designed to bring out the problem. However, you'll probably never see this unless you use patterned fills in your graphics, and you can get rid of it by using an HDMI connection.

Video quality suitable for short sessions. Aside from issues with rainbow artifacts, video is watchable but not impressive. The projector handled shadow detail well, and it avoided posterization even with clips that tend to cause the problem, but colors were a little washed out in all predefined modes. I saw rainbow artifacts infrequently enough that I'd consider using the projector for a few minutes of video at a time. For long sessions, however, anyone who sees them easily is likely to find them annoying.

For my tests, using a 92-inch diagonal image at the native 16:10 aspect ratio, the front of the projector was 14" from the screen and the window that serves as the lens 9" farther away.

The projector weighs 12.1 pounds, making it light enough to move from room to room, with or without a cart. However, it is best installed permanently. As with any ultra-short throw projector, getting the image geometry and focus right is tricky, because you're too close to the screen to see the effect of each adjustment. It helps to have someone standing behind you who can see the whole screen at once and tell you how it looks as you make changes.

The obvious choice for installation is to put the XJ-UT310WN above the screen with Casio's optional $200 wall mount. However, you can also put it on a flat surface below the screen, which is how I tested it. Either way, the lens offset puts the closest edge of the image--meaning the top or bottom--about 18% of the picture height below or above the projector.

For setting up on a desktop, you can move the image up or down, and adjust yaw, with two adjustable screw-on feet near the back plus one in the front. You can then adjust keystone, if necessary, with the remote.

Connectivity. The XJ-UT310WN's side panel includes a typical set of connectors.

The most obvious key features of the XJ-UT310WN are its ultra short throw range and its estimated 20,000 hour light source. In addition to these benefits the unit offers the following:

Eco friendly. The list of eco-friendly features in the XJ-UT310WN starts with the 20,000 hour light engine, which should eliminate the need (and cost) for replacement lamps, along with the carbon costs for shipping them. It is also mercury free.

In addition, the projector offers seven brightness settings, with two non-Eco and five Eco modes, so you can closely match its brightness to the ambient light and screen size. The setting can make a significant difference in power use. I measured the two non-Eco modes at 205 and 185 watts and the Eco modes at 148 to a notably low 83 watts. You can also set the projector to turn off after not receiving a signal for 5 to 30 minutes.

Excellent warranty. The XJ-UT310WN's warranty varies depending on the type of customer (business, government, or education) and level of use, but if you use it for up to ten hours per day five days per week, even the minimum warranty is three years for the unit and three years or 6000 hours for the light source.

Bright image with wide brightness range. With one predefined mode for its two non-Eco settings and five for each of the five Eco levels, the XJ-UT310WN gives you 27 combinations of settings that can affect brightness. That translates to both a large range of brightness and more levels within the range than most projectors offer.

As with most DLP projectors, color brightness for the brighter settings came in lower on my tests than white brightness, which explains why blue is a little dark in those modes. The good news is that even with the brightest settings, which usually show the most difference, the color brightness was roughly 70% of the white brightness. That means you won't see as big a brightness difference between full color subject matter and images that are predominantly white as you would with many other DLP projectors.

In any case, the brighter settings were easily bright enough to let the 92" diagonal image in my tests stand up to the ambient light in a typical classroom or conference room, and the range of settings offers flexibility for lower light levels and smaller screen sizes.

Acceptable brightness uniformity. The 72% brightness uniformity for the XJ-UT310WN isn't unusually low for an ultra short throw projector, but it's enough for the variation in brightness to be visible on a solid color screen. If you break the image up with text or graphics, however, it's hard to see the difference. For most applications, it shouldn't be an issue.

No predefined color presets for the brightest modes. With no predefined modes for the non-Eco settings, the only way to adjust color is manually.

Rainbow artifacts. As already mentioned, rainbow artifacts show up often enough with video that anyone who sees them easily will likely find them annoying.

Limited 3D. Although the XJ-UT310WN supports 3D with DLP-Link glasses, 3D will work only over a VGA connection.

The XJ-UT310WN is the wrong choice if you need to show a lot of video. However, it offers near excellent quality for data images, a 1280x800 resolution, and an unusual level of flexibility for adjusting brightness to match image size and the level of ambient light. The initial cost is a little high, but it's at least partly offset by savings in running in costs. And to the extent that it isn't, you may consider it worth paying a little more for ecological benefits like the mercury-free light source. If you need an ultra-short throw data projector for a small- to mid-size room, the XJ-UT310WN should certainly be in the running.

For more detailed specifications and connections, check out our Casio XJ-UT310WN projector page.

Comments (2) Post a Comment
Allen Posted Feb 25, 2016 7:14 AM PST
I have a client that wants to have this projector installed from the ceiling. It will be projecting onto a 87" diagonal smart board. How long should the down pole be on a 9' ceiling with board 32" from the floor?
Scott Posted Mar 9, 2016 1:02 PM PST
There is an easy to install Wall Mount, with a Paper Template that shows you exactly where on the wall to install the mounting bracket. This is the way to go! It mounts the projector several inches above your smart board, and slightly off-center of the board to center the projector lens on the board.