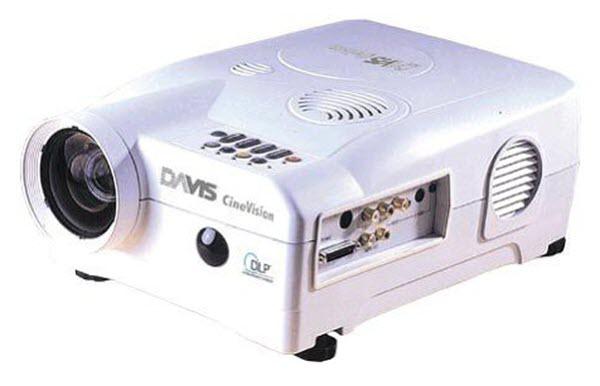 The CinemaOne represents Davis' entry into the home theater market under its own label. Davis is the manufacturer of the Dream Vision DL500 that made such a hit last year. So the industry has been anticipating the release of a DLP-based video product under the Davis label for some time.

This projector is a portable 10-pounder, rated at 700 ANSI lumens. It has an SVGA (800 x 600) native resolution. Data images are displayed at the full 800 x 600 resolution of the DLP chip. However, video images fed through the composite and S-video ports, when they are in 4:3 aspect ratio, are displayed at a reduced 690 x 532 format with a black frame around it. If you have a source that is 16:9 aspect ratio, and you select the 16:9 display option, the active pixel array becomes 716 x 398. If you feed a 480p video signal into the data port, as you can with the DVDO iScan line doubler or a progressive scan DVD player, the image will be displayed in native unscaled VGA (640 x 480) resolution with a black frame.

The CinemaOne connection panel is fairly basic. It includes one composite video RCA input, one S-Video input, one set of RCA audio inputs, and another set of audio outputs. There is also one EVC connector for computer input. This is not the typical 15-pin VGA port that is found on most LCD and DLP projectors. Therefore data input requires the use of a cable converter that is supplied with the unit.

Physically, the white case that is standard with this model is the preferred color for most home theater enthusiasts since a white projector tends to be less noticeable when ceiling mounted on a white ceiling. Its small form factor of 13" x 5" x 9" makes it even less intrusive. In addition to ceiling mount positioning for front projection, it can be table-mounted or used as a rear-projection device as well. There are independent feet under each of the four corners that can be screwed in and out to set the projection angle desired. There is no keystone adjustment however, so if the centerline of the projection lens is not perpendicular to a point about one foot below the base of the screen (or above the top of the screen if inverted), there will be a trapezoidal effect.

The CinemaOne is a portable 10 lbs, although it is not really well-suited to being carried long distances. The handle is quite thin and flimsy, and snaps into the molded casework when not in use. One would want to use a glove or some padding on the handle to carry it for any length of time.

There is a 1.5x zoom factor on the power zoom lens which gives great flexibility in positioning the projector relative to the screen. Power zoom and focus controls exist on the control panel, as well as the menu that is accessible via the remote control. The remote is a small and simple four-button job, but functional once you get the hang of the mouse control.

In video, the user can adjust brightness, contrast, color saturation, and tint by calling up the onscreen menu. The menu itself is not intrusive into the image, and is easy to work with.

In both video and data, there is a "Color Manager" which consists of four factory preset color temperatures that the user can select from: "True Colors," "High Brightness," "Warm Colors I" and "Warm Colors II." They did not seem to be calibrated properly on the review unit, as they measured in at D6200, D6100, D6150, and D5900 respectively. There was no way for the user to recalibrate to the D6500 kelvins that is ideal for video.

Compared with the three other projectors in this review, the Davis CinemaOne competes well in black level, contrast ratio, and shadow detail, primarily due to its DLP light engine. However, as the only native SVGA machine in the group, it is lower in resolution than the other three.

DLP technology is known for its ability to mute the pixel structure and reduce the dreaded "screen door" effect that is common with LCDs. At any given resolution, a DLP light engine will usually produce less pixelation than an LCD. Thus we were curious to see how DLP technology at SVGA resolution would compare with the higher resolution LCD machines. The bottom line: the evidence of pixel structure on the CinemaOne was about equal to that of the other three machines, each of which are XGA resolution LCDs. Thus among this group of products, the DLP did not produce an advantage in reduced pixelation.

As noted above, a video image in the standard 4:3 aspect ratio is not scaled up into the full 800 x 600 matrix of the DLP chip. Instead, it is scaled into an active pixel array of 690 x 532. The inert pixels produce a black frame around the image. If the active image is zoomed up to fill the screen, the black frame falls outside the screen area, and is not very noticeable. However, since the 4:3 video image is only using 76.5% of the total pixels available, it is only using 76.5% of the potential light output of the engine. Thus almost one-fourth of the rated 700 ANSI lumens the engine produces cannot be used with 4:3 video.

There is a 16:9 format option on this projector. In this mode, the projected image is in an active matrix of 716 x 398. This is 59% of the 800 x 600 pixel array of the chip. Thus in this format you only get 59% of the engine's available light onto the screen. The 16:9 widescreen format is achieved with only a 4% widening of the standard 4:3 image. The balance of the widescreen effect it achieved through a widening of the top and bottom black bars, and a reduction in vertical resolution.

This reduced vertical resolution in video makes scaling artifacts and NTSC artifacts both more noticeable. There are a couple of ways to compensate for this. First, do not project overly huge images. If the image is kept to a maximum of about five feet wide, the scaling and motion artifacts become less visible while color saturation and contrast are optimized.

A second option is to use a 480 progressive source. To get this, we used a DVDO iScan line doubler, which takes a standard interlaced NTSC signal via either composite or S-video inputs, and produces a 480p signal as an output. In the deinterlacing process, it removes and compensates for many of the motion artifacts that might otherwise be present. Feeding the CinemaOne through the data port with a DVDO iScan produces a much more stable picture.

There is more good news. When the CinemaOne receives a 480p signal through its PC port, it (thankfully) does not bother to scale it up to 690 x 532. Instead, it automatically plays back a 480p signal in its native 640 x 480 format. This further reduces the pixels in use by another 16%. However, scaling artifacts are eliminated altogether, which is a huge advantage. So the resulting picture is a great deal more stable and clean—and much more satisfying to watch. On XGA machines, you usually don't want to watch video in native VGA resolution because you give up too much resolution and light output of the engine. However, with an SVGA machine, the sacrifice is not as great, and in the case of the CinemaOne it is well worth it.

However, the use of the DVDO is not without its cost. There is a noticeable color shift when the DVDO processed signal is fed into the data port. There is no way the user can correct it either on the DVDO or on the projector. In our judgment, the marginal loss of color accuracy was not much of a price to pay for the beautifully stable and sharp image in this mode. However, other viewers may feel differently.

It is possible that the manufacturer can adjust the CinemaOne internally to compensate for the color shift in the data channel. If so, this would be the best solution of all.

Fan noise was both louder and higher in pitch on the CinemaOne than on the other three products in this review. For home theater use, you will want to consider installing it with external sound damping. (Make sure not to block intake or exhaust if you do so.)

There was also more light being scattered from the CinemaOne than on the others. Light escapes from both sides of the unit. Also, light is scattered randomly through the lens outside of the cone of image projection. In ceiling mount mode, it will throw light onto the ceiling between the projector and the screen. If installed in a white room, the illumination from scattered light is enough to reduce the total contrast ratio on the screen. If you are going to construct an external baffling system to muffle the fan, take care to have it intercept some of the extraneous light as well.

The CinemaOne does not accept component video, nor is it HDTV compatible. In a projector priced at $7,995, this is a notable shortcoming.

In short, the black level, contrast ratio, and color saturation are the CinemaOne's strengths. Scaling, deinterlacing, and usable light output are its weaknesses. The best image quality will come from a 480p signal displayed in its native format. You can get 480p from either a progressive scan DVD player, and/or the use of a DVDO iScan for NTSC sources.

At an MSRP of $7,995, this unit is a bit overpriced relative to the competition. For example, the Sony VPL-VW10HT is listed at $6,990. But the Sony offers HDTV compatibility, higher resolution, higher light output, and lower fan noise. The Sony has weaknesses of its own, to be sure. But the CinemaOne needs to sell at street prices below the Sony in order to maintain a realistic value proposition.

For more detailed specifications and connections, check out our Davis CinemaOne projector page.