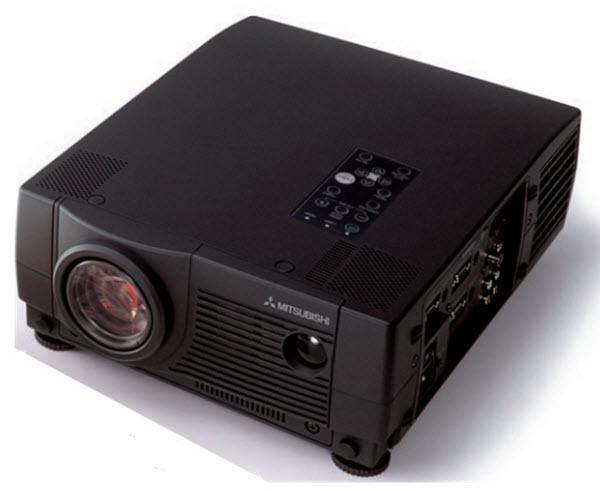 Subscribe
Evan Powell
SHARE
Evan Powell
Evan Powell
Mitsubishi X300 XGA 3LCD Projector
Price
$9,995 MSRP Discontinued
Mitsubishi may be a household word in the world of big screen TVs, but the company has not yet focused its formidable LCD projector technology on the home theater market. Hopefully that will change sometime soon. Mitsubishi is making some fascinating products these days. Chief among them is the 2000 ANSI lumen, XGA resolution LVP-X300.

Billed as an "all-purpose" multimedia projector, the X300 does have a lot to offer. At only 13 lbs, this sleek little light cannon serves up screaming bright images in data and graphics, in composite and S-video, in component video, and in 1080i HDTV.

The on-screen menu is much better than on earlier models. Each control is intuitive and easy to operate, and the menu boxes take up very little screen area. Furthermore, the menu boxes can be relocated from the upper left corner to the lower right corner to provide flexible viewing of the screen while adjustments are being made.

You would think that with the heavy duty light output of 2000 ANSI lumens, an industrial strength blower would be required to cool the system. Not so. Mitsubishi engineers have muffled this light engine down to where it is almost as quiet as the Sony.

There are four color temperature options on the X300. Three are factory preset, and the fourth you can roll your own. On our review sample, we measured the first setting at D7500, the second, at D10500, and the third at D5900. On the fourth, we found it very easy to dial in an exact D6500. (Of course, you need a light meter to do it).

While the first two color temperature settings, D7500 and D10500 respectively, are great for data and graphics, the D6500 setting is necessary for optimum NTSC video performance. Since the color temperature of the lamp will change with usage, it is good to have this user-adjustable rather than factory preset. The only thing we would like to see is a second user-adjustable setting to create a D5400, which is optimum for black and white films. (Casablanca deserves to be seen at D5400!)

The X300 is designed for portable use as well as fixed installation. There is an adequate handle that folds into the side of the unit and becomes almost invisible when not in use. Yes, it is three pounds heavier than the InFocus and Davis, but if you need to put 2000 ANSI lumens on the screen, three extra pounds is not much to complain about.

The X300 has power focus and zoom. Activating the focus control puts an inadequate little target up in the middle of the screen, and if you don't find the plus/minus buttons on the control panel or remote right away, it disappears. The focus control leaves something to be desired. One must toggle back and forth almost constantly just to keep the focus function active and on the screen. The target is so small that it takes several passes through the sweet spot to find the ideal setting. In future products, we would like to see a little more thought put into focusing control.

The X300 produces a very bright image with a gorgeous color palate. The soft array of colors in Ch. 16 of Shakespeare in Love was rendered as beautifully as any digital projector we've ever seen in this price range. The vibrant colors in Austin Powers were reproduced with accuracy and balance.

Furthermore, contrary to what you might expect from LCD, there was no problem getting a satisfying black level out of the X300. James Bond's tux in Goldeneye looked truly black and white. You can watch this projector for hours without ever getting that "gee I wish it had just a bit more snap" feeling. The Davis with its DLP engine had a touch better contrast, but the Mits was a very close second. Those who think that LCD can't produce excellent blacks haven't seen the X300.

Even though black level was very good, shadow detail is still a weakness with LCDs. The Davis was the stronger performer here. All three of the LCD products reviewed here could use a boost in shadow detail.

The X300 displayed a noticeable array of scaling and NTSC motion artifacts in straight composite and S-video. However, the DVDO iScan worked beautifully to stabilize the picture and remove most of the motion artifacts. As a 10% incremental investment, we would not consider watching NTSC source material on the X300 without an iScan.

There is another accessory option that works well with the X300. That is the Cygnus Image Processor. Basically, this is a filter that fits over the projection lens. It has the ability to virtually eliminate pixel structure and other hard edges in a digital image. It smooths out the image and makes it look much more film-like. The effect on the X300 is truly exciting.

The Cygnus Image Processor has two downside effects. First, it cuts light on the screen by about 5%. Second, it reduces the latent contrast of the projector a bit. The other three projectors in this review do not have the combination of light output and contrast to sacrifice. However, the brilliant X300 does. Set up the X300 with a DVDO iScan behind it, and a Cygnus Image Processor in front of it, and you will wonder why anyone would bother with HDTV. This was an immensely satisfying experience.

At an ANSI lumen rating of 2000, the X300 was by far the brightest projector of the group. If you are setting it up for home theater, do not use anything greater than a unity gain screen with this one. It has the power to illuminate a 10 to 12 foot wide screen without much loss in contrast. The other three units in this study are at their best with 8 foot wide screens or less.

Brightness uniformity was below average on our sample unit, measuring about 75%. However there was no visible hotspotting, and the unevenness of illumination could not be detected in video material.

The awesome light output and beautiful color palate of the X300 were outstanding features as compared to the other three projectors in this review. Black levels were better than those on the InFocus and Sony, and almost equal to the CinemaOne. The scaling and deinterlacing weaknesses in composite and S-video were not as severe as those on the Sony and Davis products. However they were noticeable enough that you will want to overcome them with the use of a progressive scan DVD player, and/or the DVDO iScan for NTSC sources, either of which are strongly recommended for use with this projector.

The MSRP of the X300 (currently $11,495) is much higher than the other three units in this review. However, at this writing dealers at ProjectorCentral are offering the X300 for street prices of around $7,200. The bottom line is that the X300 costs a bit more than the other products in this review, but the incremental cost will be money well spent to many buyers.

For more detailed specifications and connections, check out our Mitsubishi X300 projector page.