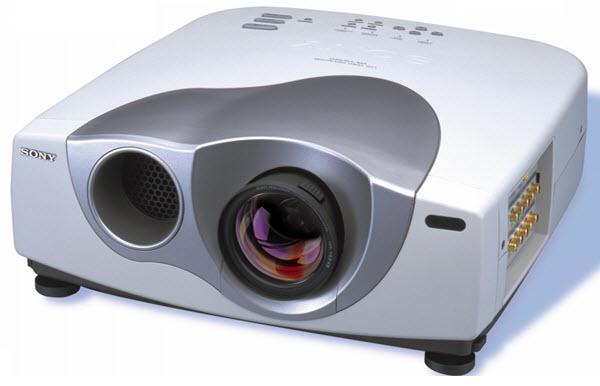 Subscribe
Evan Powell
Evan Powell
Evan Powell
Sony VW10HT WXGA 3LCD Projector
Price
$5,999 MSRP Discontinued
There hasn't been a projector that has caused as much stir as the VW10HT for a long time. The fascination is due to the very unique LCD panels that are constructed with a native 16:9 aspect ratio pixel array: 1366 x 768. This is essentially an XGA resolution display that has been extended horizontally so that 16:9 video material can be viewed without compromising vertical resolution.

Here's the issue: when it comes to producing a satisfying video image in digital projectors, vertical resolution (that is, how many horizontal scan lines are used to make the image) is a key. Vertical resolution determines how small an object can get, as a percentage of the picture height, without breaking up and becoming indistinguishable. The most irritating effect is that people's faces blur when they become too small as a percentage of the picture height. In general, the more scan lines there are, the more detail can be retained in smaller objects (unless scaling noise interferes with it!).

The VW10HT offers component video inputs as well as full HDTV compatibility with both 1080i and 720p formats. 720p can be displayed in native (unscaled) mode due to the wide format display. This is a very attractive feature, as 720p is the higher quality of the two popular HDTV formats, and many projectors that are HDTV compatible will take 1080i only. The VW10HT is at its best with a 720p source.

This projector is rated at 1000 ANSI lumens, but it has a "cinema black" mode which improves black levels somewhat while reducing the ANSI lumen rating to 700. Most users will opt for the cinema black mode unless projecting onto an 8' wide or larger screen that requires the additional light output.

Brightness uniformity on this projector is outstanding. The evenness of edge-to-edge illumination was almost 100%. It's hard to beat perfection.

There are six different color temperature settings, four of which can be customized. However, if you are not adept at adjusting gain and bias controls (almost nobody is), you will want a professional to optimize the system for you. The sample we received for review was not calibrated properly even in the factory preset. All six settings measured below D6000. Others have had better luck with their units out of the box, so our sample was probably not representative of what Sony ships to customers. We were able to dial in D6500, but it took some work.

The VW10HT is a fixed installation device, pure and simple. It would be too bulky to carry even if it had a handle, which it doesn't. It has no audio on board as the other three units reviewed here do. So if it is to be used in a conference room setting, an external audio system will be required.

Fan noise on this projector was the lowest of the four, and was even a little less in Cinema Black mode that it was at full light output. The projector is not silent, but it is quiet enough to satisfy just about all home theater enthusiasts.

The outstanding competitive strengths of the VW10HT are the high resolution that can be derived from the 16:9 LCD display and HDTV compatibility with both 1080i and 720p formats. None of the other three have the Sony's resolution capability, and only the Mitsubishi is HDTV compatible, but in 1080i only.

The problem we found on our sample unit with standard NTSC sources is that a combination of scaling noise and motion artifacts tended to compromise overall image quality in terms of clarity and stability. On many other projectors, the use of the DVDO iScan helps to solve this problem, and it did so here as well. The stability of the picture was enhanced significantly when the DVDO was used compared to the image derived from straight composite or S-video, making it much more satisfying to watch.

When component video was fed directly from the Sony DVP-S7700 DVD player, the projector showed an increase in contrast, in color saturation, and in picture detail. However, the scaling noise and motion artifacts were still present. So it came down to a matter of taste: do you use the DVDO for the (much) better image stability and sacrifice some color, contrast, and detail? Or do you go for the component image and live with the artifacts? Our take was that the DVDO-processed 480p signal was the more satisfying. However, the VW10HT ultimately needs to be driven by a component progressive scan DVD player or 720P HDTV to get the best possible results.

Industry buzz has voiced concerns about the lack of deep blacks in this product. While the Davis and Mitsubishi both had deeper black levels, the Sony was about equal to the InFocus in this regard. It is capable of producing an exciting image with adequate contrast if screen width is kept to 8 feet or less. While it would be great to get better blacks on this product, the problem does not rise to the level of a serious flaw as some would claim.

At this writing, the VW10HT is selling on the street for under $6,000. For those who want HDTV compatibility in the 720p format, the Sony is the only game in town anywhere close to this price range.

Overall, Sony has packed a lot of home theater value into this product. People who are serious enough about home theater to buy this product will also want to invest in a progressive scan DVD player and/or a DVDO iScan for their standard NTSC source material to get the best performance out of it. They may also want to see a professional installer to get its color temperature fine-tuned.

Buyers who are keenly interested in solid black levels as a prerequisite for satisfaction may want to look elsewhere. However, there will undoubtedly be thousands of users out there who will be entirely delighted with the home theater experience that the VW10HT can deliver.

For more detailed specifications and connections, check out our Sony VPL-VW10HT projector page.