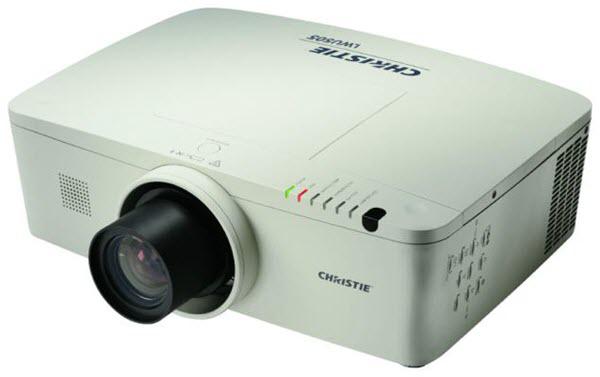 Aimed at anything from large meeting rooms to small auditoriums, the Christie LWU505 stands ready to show bright, high quality images. Built around an LCD engine and rated at 5000 lumens, the projector's 1920x1200 widescreen resolution can handle complex data images like engineering drawings or show multiple windows with less complex data in each. It can also show 1080p video without having to scale the image to a lower resolution. More important, it delivers on image quality for both data and video.

The projector offers a number of features for easy setup, most notably four corner keystone correction with a separate setting for each corner, which makes it easy to get a truly rectangular image. The combination of brightness, high resolution, image quality, and setup convenience makes the Christie LWU505 impressive indeed. And although it isn't cheap, it's reasonably priced for what it delivers, at $8995 list, with government and education discounts available.

Resolution suitable for fine detail or multiple windows. The Christie LWU505's 1920x1200 resolution does a superb job of showing fine detail in complex data images or showing more mundane material in multiple windows with a useful amount of, say, a spreadsheet or text in each. Divide the screen into four 960x600 windows, and each one will offer a higher resolution than SVGA's 800x600.

For video, the 1920x1200 resolution can show a full 1080p image without scaling. You can also show images from two sources at once, easily switching between Picture-by-Picture mode, with two equal size images next to each other, and Picture-in-Picture mode, with one source full screen and a corner cut out to insert the second image at your choice of 10 to 50 percent height and width.

Bright image. Although the projector didn't quite match its 5000 lumen rating on our tests, we measured it in its brightest mode and largest image size (wide angle setting for the lens) at 4280 lumens, or 86% of its rating, a higher percentage than many projectors deliver. More important, it's easily bright enough for the 92" diagonal 1900x1200 image we used to stand up to the typical ambient light in an office or classroom, and also bright enough to throw larger images for larger venues. The same holds true even for the somewhat lower levels we measured for the projector's two other presets, at 3585 and 3846 lumens.

For low light conditions or smaller screen sizes, where the image might be too bright to view comfortably, you can use some combination of Eco mode and one of the less bright presets. You can also place the projector closer to the screen, and adjust the zoom lens to give you a smaller image size. With the lens set for maximum telephoto (minimum image size), the brightness drops by about 23%, to 3286 lumens. Good brightness uniformity. The projector also did well on brightness uniformity, although not quite as well as you might assume from the measured 83%. Whether you see a variation in brightness depends on both the difference between the brightest and least bright areas, and on how close together they are. With the Christie LWU505 and a solid white screen, the area around the vertical midline of the screen was visibly brighter than the sides, particularly in one corner. However, the difference was little enough so you can't see it if you break up the screen with text or graphics.

Zoom lens standard, and a choice of lenses. The 1.7x zoom lens that comes standard on the Christie LWU505 offers a fair amount of flexibility in how far you can put the projector from the screen for any given image size. For our 92" diagonal test image, for example, the calculated distance is anywhere from 11.3 to 19.1 feet with a plus or minus 5% variation for individual lenses. The distance we measured was just within that 5% range.

Tools for easy setup. In addition to the zoom lens and choice of lenses, the projector offers two other important conveniences that make setup still easier. The first is vertical and horizontal lens shift, which gives you more flexbility for where you put the projector. We measured the vertical shift at roughly two thirds of a screen height in either direction from the center position and the horizontal shift at roughly 12 or 13 percent of a screen width in either direction from center.

The second tool is a four corner keystone adjustment, which lets you adjust each corner separately to square off the image. Until you've used it, you simply will not believe how easily you can adjust the image to a true rectangle. Standard keystone adjustments don't even come close.

Extensive connectivity choices. Although you could quibble with Christie's choice of connectors, with only one VGA input for a computer or component video, there are enough choices to let you connect just about any way you can think of. For digital connections for a computer or video, there's both an HDMI and DVI-D port. A set of five BNC connectors (a common choice on professional video equipment) lets you connect a component video source using all five connectors (using R,G,B,H,V signals), or three (for the more common three-component video), or use just one for composite video. Similarly, a set of three phono plugs lets you use all three for componant video or one for composite video. In addition, there's an S-video port and a pass-through VGA monitor port.

For audio, in addition to HDMI, there are two stereo miniplugs and one set of stereo phono plugs. One miniplug is paired with the VGA and DVI-D inputs. In addition, menu options let you choose between pairing the HDMI video signal with either the HDMI audio or the miniplug. The second miniplug is paired to the BNC connectors. The phono plugs are paired to the S-video connector and the three phono plugs for video input.

The ports also include a miniplug stereo audio output, LAN and RS-232 connectors to manage the projector from a computer or a control box, a USB port for a computer to let you control the computer mouse pointer through the projector's remote, and a connector that lets you use the remote as wired rather than wireless. Finally, Christie also sells a $699 optional plug-in module for sending data over a network connection.

Near excellent image quality for data. The Christie LWU505 showed some minor color balance issues, with a slight tint in some shades of gray on a screen designed to bring out the problem. However, the tint didn't show on any real world images. Colors were fully saturated and suitably vibrant, both black and white and white on black text was crisp and easily readable even at the smallest sizes we test with, and images that tend to cause pixel jitter with an analog connection showed little to no jitter.

Average video quality. Video quality in our tests was short of top tier, mostly because of a lack of deep dark blacks, but it was better than many data projectors. Connecting to a Blu-ray player using an HDMI connection, I saw no serious problems playing either DVDs or Blu-ray discs. The projector handled skin tones well, delivered acceptable color in Cinema mode, and did an impressively good job of not showing issues like posterization (colors changing suddenly where they should shade gradually) or loss of shadow detail with clips that tend to cause those problems. The quality was good enough to watch a full length movie, particularly with a Blu-ray disc.

Disappointing audio quality. The Christie LWU505's built in 10-watt mono speaker is loud enough to fill a large conference room or classroom, but the quality is such that it's best described as a convenience feature. The audio is both tinny and suffers from a bottom of a barrel echo effect, a combination that makes it hard to understand. If you care about audio quality, you'll need an external sound system.

Picture-in-Picture limitations. The Picture-in-Picture and Picture-by-Picture modes offer less flexibility than you would expect. For example, although you can show one image from a PC connected through the VGA, HDMI, or DVI-D port along with one video image connected through any other port, you can't show images from two sources connected to, say, the VGA and the HDMI ports. More generally, no matter what you have plugged into the VGA, HDMI, and DVI-D ports, you can show an image coming through only one of those ports at a time. The feature would obviously be far more useful if you could show images from any combination of input ports.

Obscure menu commands. Although most of the menu structure is self-explanatory, there are a few commands that aren't. The combined Picture-in-Picture and Picture-by-Picture mode in particular took some trial and error experimentation plus reading the instructions before I could understand how to use it.

As may be obvious, the Christie LWU505 does the important things well and runs into problems only on minor issues. The combination of high resolution, suitable brightness for anything up to a large conference room or small auditorium, high quality images for data, and acceptable quality images for video is enough to make it worth considering. The flexibility in placement thanks to the zoom lens and choice of zoom lenses, plus such conveniences as lens shift and four-corner keystone correction add a polish that makes it even easier to recommend. If you need 1920x1200 resolution and a projector that's bright enough for anything from a large conference room to a small auditorium, the Christie LWU505 is a solidly built projector worthy of your consideration.

For more detailed specifications and connections, check out our Christie LWU505 projector page.

Google translation to English: The projector is a high class. Displays a clear picture of perfect clarity, reflects the natural color. The conference room or small auditorium would also be a good solution Vivitek D5000 projector installation 5200ANSI 2500:1 XGA 8.6 kg:
Robert Hart Posted Sep 23, 2013 5:54 PM PST
I find these reviews to be all a little repressive. Every bright projector does ok video but not as good as home theater projectors. I have had different experiences. It may just be my taste but as an owner of both home theater and bright proffesional projectors, I am almost always disappointed by home theater projectors. They have these silly high contrast ratios that were measured in lab level darkness that most people can't achieve at home without blocking all windows, painting the walls black and covering every light - even the standby light on the device etc. even then, they mostly look ok. Proffesional grade projectors cost a fortune but you can get a used one for a bargain these days. You can spend $2000 and get a projector that cost $20000 a few years before and have brightness of between 5000 and 10000 lumens. Enough to watch in the living room with the lights on. Also, with the right screen, you can get amazing blacks. Contrast ratio's compare the darkest to the brightest possible image in a pitch black room. 30,000 times darker than 700 lumens is not much more impressive than 3000 times darker than 7000 lumens. Even a small side lamp makes home theater projectors lose all their contrast. It can be a false idol. Bright projectors let you use darker screens. With my black-screens, I get amazing blacks with any projector but with the proffesional one, I get them with the lights on top!