Throw distance is the distance from the tip of the projector's lens to the screen.

So what about zoom ratio? What is it and how does it affect the throw distance and image width?

If you've ever owned a camera or camcorder, you have no doubt had the ability to zoom in or out on the object you're trying to photograph. It essentially let's you make the object bigger or smaller without you moving. A projector zoom lens is no different. It allows you to increase or decrease the size of the projected image without moving the projector.

So why would you want to do that? There are a several reasons. First, if this is a mobile projector, a zoom lens is extremely handy for setting up in rooms where you have little control over the size of the screen or where you must place the projector. Second, if you are using it in a fixed installation, a zoom lens gives you greater flexibility on where you can install the projector. And finally, if you should decide to switch to a smaller or larger screen in a fixed installation, you have a reasonable chance of making this change without having to move the projector.

The most common zoom ratio among today's projectors is 1.2. With a 1.2 zoom ratio you can vary the image size by 20% by simply adjusting the zoom lens as illustrated in the graphic to this graphic.

The range of projector zoom ratios are as low as 0.4 and as high as 2.1; however, you can go lower and considerably higher by purchasing a projector that supports optional lenses. Much 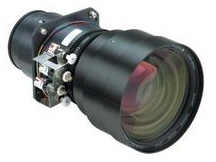 like a professional camera, projectors with optional lenses can generally provide solutions for any special need; albeit at a higher cost.

Projectors with short throw or super short throw lenses are able to create larger images at a shorter throw distance. This can be an ideal setup in a classroom as it allows a teacher more mobility. If you're not planning on mounting your projector to the ceiling then a short throw lens would allow you to remove the projector from the seating area of your students.