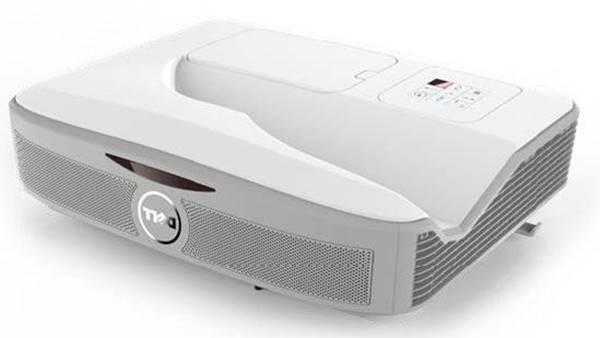 The Dell Projector S560, which replaces the S510N in Dell's line, packs a lot of projector into a small package. Weighing just 10.4 pounds, it offers 1008p native resolution, 3,400 ANSI lumens, and an ultra short throw that delivers a 100-inch diagonal 16:9 image at just 11" from the screen. It just commenced shipping last month for $1,399.

The Dell Projector S560 is Dell's newest generation ultra short throw projector, or, more precisely--since it comes in three versions--one of it's new generation series. The S560 is the base model with no interactive features. The S560P adds interactivity using an interactive pen. The S560T is touch interactive, meaning you can interact with the image using your finger or non-interactive stylus to annotate images and move the mouse or give commands. All three models share the same 1920x1080 native resolution, 3,400 ANSI lumen brightness, 0.25 throw ratio, and even the same size and weight.

In all three variations, the S560 is small and light for an ultra short throw model at 4.1" x 15.1" x 12.5" (HWD) and just 10.4 pounds. It's tempting at that size and weight to consider it for carrying room to room or mounting on a cart. However, getting the image in focus and properly squared off is a challenge for ultra short throw models, which means the size and weight is best appreciated for helping to make setup easy.

The S560 is most suitable for permanent installation, either in a wall mount above the screen or on a flat space below it--with a wall mount the preferred choice for the interactive models. It also supports mounting in a vertical position. However, that's most useful for the S560P and S560T, since it lets you create an interactive tabletop.

At 3,400 lumens, the $1,399 Dell Projector S560 is easily bright enough to stand up to ambient light at its maximum 100" size, while the 1080p resolution maintains fine detail, and the ultra short throw lets you place the projector only inches from the screen. It's one of only a few projectors that offers a similar balance of features at a competitive price, and the only one currently on the market that includes a 2-year warranty with advanced exchange in the price. The combination makes it quite interesting and worth checking out.

For more detailed specifications and connections, check out our Dell S560 projector page.