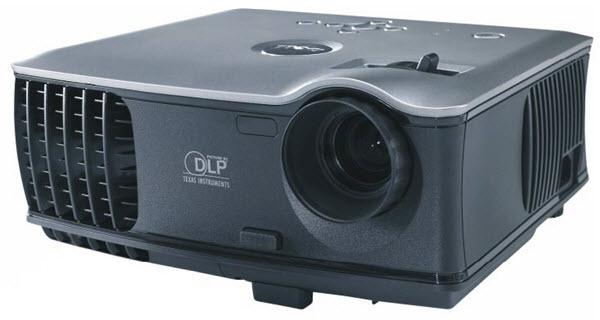 Last August we reviewed the Dell 2400MP, a 3000 lumen, 5.5 pound XGA projector that set a dramatic new price/performance benchmark at $1100. That was an aggressive competitive move. Well, Dell has done it again, this time with the 1800MP. With 2100 ANSI lumens in a tiny 4.6 pound package, the 1800MP is a flexible projector suited to portable and education use. At $799, it is the least expensive XGA projector we've yet seen, and it sets another new price/performance standard for portable XGA projectors.

Connection Panel: 2 15-pin VGA inputs, S-Video, Composite, one VGA-output/monitor passthrough, one USB port, RS-232C for computer control, one 1/8" audio in, one 1/8" audio out, and a Kensington lock.

The 1800MP's case measures 4.5 x 9.6 x 8.3 inches, giving it a footprint smaller than your average magazine. While its 4.5" height precludes putting it in a case with your laptop, the included carrying case is sturdy enough to survive a plane trip as your carry-on.

The Dell 1800MP weighs only 4.6 pounds. At this writing there are only two XGA projectors that weigh less than 5 pounds and cost less than $1,000. To get a projector with the same lumen and contrast ratings but one pound lighter, it costs at least $1,299 - a $500 premium over the price of the 1800MP. This combination of light weight and low cost puts the 1800MP in a unique position in today's market.

There is a control panel on the top of the unit that allows for navigation of the 1800MP's menu system as well as one-touch keystone adjustment. The connection panel is on the rear of the projector. It has two VGA inputs, which is nearly unheard of in a budget projector. It also has one VGA output for monitor loop-through, a feature that is highly desirable in the education market in particular. Password protection can be used to limit access to the projector, and a Kensington lock provides the security needed for classroom deployment.

The 1800MP has a flat throw angle, meaning that the centerline of the lens intersects the bottom edge of the projected image when the projector is not tilted. Practically speaking, this means that the bottom edge of the picture will be just a couple inches above the level of the conference table. If you want the image higher on the wall, you must either elevate the projector or tilt it upwards. If you choose the latter, you will have a trapezoid-shaped image that you can opt to square up with keystone correction.

Keystone correction is vertical only, and manually adjusted. When using keystone, the 1800MP applies an uneven bolding effect across the screen, resulting in small text becoming slightly harder to read. However, at 12pt font and above, this should cease to be a problem except on very small screens.

The 1800MP's remote control is sleek and simple, with source selection, menu controls, volume controls for the onboard 2W speaker, and page up/page down buttons for a computer connected via USB. There is relatively little learning curve, and the buttons are easy to use by feel, even without a backlight.

The menu system is somewhat unique. Pressing the menu button on the case or remote brings up a row of icons at the bottom of the screen, representing different categories of adjustments. Pressing "enter" on any of these adjustments brings you into that submenu, and pressing "menu" again collapses it back down. It is a very slimmed-down, low profile approach that manages to maintain functionality without taking up valuable screen real estate.

When the projector is operated in standard mode with the lamp on full power, fan noise is about average for this class of projector. However, eco-mode makes it significantly quieter, to the point where it is easy to ignore even when used in a small meeting room and placed in close proximity to the audience.

The 1800MP has a 1.1:1 zoom/focus lens, which is as limited in range as a zoom lens gets. It cannot be used to significantly alter the size of the projected image from any given throw distance, so it does not allow for much placement flexibility. For example, if you want to present a 70" diagonal image, the projector needs to be placed about 9.5 feet from the screen, give or take about six inches.

Lamp life on the 1800MP is rated at 2500 hours for standard operating mode and 3000 hours for eco-mode. Replacement lamps cost $270 directly from Dell, or 1/3 of the cost of the projector itself. This sounds like a large amount, but it really means that you can purchase the 1800MP and a replacement lamp for the cost of the larger 2400MP, and keep it running for twice as long. Furthermore, even at 2500 hours of lamp life, the price of running the 1800MP works out to roughly ten cents per lamp hour.

Our 1800MP test unit measured a hair under 1800 ANSI lumens in its brightest precalibrated mode (PC). Putting the unit into eco-mode dropped lumen output from 1800 to 1180, or a 33% drop. This represents more of a lumen differential between full power and eco-mode than we find on most projectors, as the average is closer to 20%. Therefore, you can use the lamp power modes to control the amount of light you want for varying presentation situations. In smaller conference rooms, 1180 lumens will often be sufficient while 1800 may be too bright. (Due to the 1800MP's short zoom range, there was no lumen output difference between wide angle and telephoto zoom.)

For less light-intensive applications or darkened meeting rooms, sRGB mode in high lamp brings lumen output down to 609 ANSI, or 402 ANSI in low lamp mode. This is ideal for photography in a darkened room or even movies on the weekend, for which a business projector would typically be too bright.

While black level in PC mode was normal for very bright commercial projectors, which is to say not very good, sRGB mode offered a huge improvement. In this mode, the 1800MP is a fine choice for any number of applications, including photography, video games, and the occasional movie.

Image sharpness was impeccable. Not only was a text document clear and easy to read down to 8pt font, but the projector's image was razor sharp, from edge to edge. Every corner was in perfect focus simultaneously, and there was not the slightest hint of softness anywhere in the image.

One of the competitive strengths of DLP technology is its subtle pixel structure, a feature that is particularly desirable when viewing video, film, and digital photography. When viewing the image from a distance of anything more than one screen width, there was no visible pixelation and no hint of a screen-door effect.

The 1800MP looks its best when displaying a native XGA signal, or 1024x768. At 1280x1024, or SXGA, small text became harder to read due to compression artifacts, but 12pt and larger font was still legible. At 1600x1200, the 1800MP's maximum resolution, PowerPoint slide shows and photography were still presentable, while small text was practically illegible. For best results, use the 1800MP with an XGA-compatible computer.

The Dell 1800MP sets a new gold standard in the realm of low-cost projection - its superb XGA performance, high lumen output, and rock-bottom $799 price tag offer an enticing combination to mobile presenters, educators, and anyone else in need of a portable XGA projector. While there are some limitations, like a short zoom range and imperfect keystone adjustment, the Dell 1800MP is a serious contender and a tremendous value.

For more detailed specifications and connections, check out our Dell 1800MP projector page.