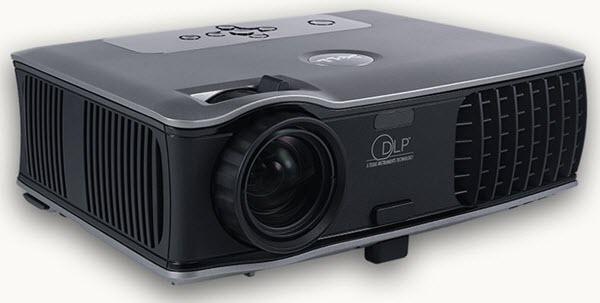 Every once in a while, a projector comes along that sets a dramatic new price/performance benchmark. The Dell 2400MP is just such a projector. It is a 5.5lb XGA projector that puts out 3000 ANSI lumens, which in itself is rare. But in addition, it has an MSRP of $1099 (editor's note: Dell has informed us that $999 was a promotional price, and that the standard MSRP is $1099), which makes the Dell 2400MP an as-yet-unmatched value in terms of lumens per dollar in portable projectors. If you are on the road and giving Powerpoint presentations on the go, this projector offers good features at a great price, and it may be ideal for you. It will also be particularly attractive as a cost-effective solution for classroom presentation.

The Dell 2400MP has a small form factor. At 4.0" x 10.8" x 8.3" and only 5.5 pounds, it is easily transported, and it comes with a rubberized case - a step above the soft cases included with most business projectors. While the case is likely too big to fit inside another carry-on or shoulder bag, this is the price you pay for actual, substantial padding around your projector.

Obviously, a budget-priced compact 3000 lumen projector will lack some features found in larger, more expensive models. In this case the connection panel is rather bare - featuring composite, S-Video, and 15-pin VGA video connections. A DVI or HDMI port would have been useful for connecting high-end video cards, but in a mobile presentation projector that feature would likely go unused by most buyers. So without the aid of an external video switching device, it is only possible to send one high quality source to the 2400MP at a time. On the other hand, for mobile presentation that is usually all you'll ever need.

The 2400MP incorporates a Kensington lock and a VGA output for monitor passthrough. These features combined with high light output, XGA resolution, low fan noise, and a low price make it a solid contender for the K-12 education market.

The 2400MP's lens has an up-angled offset which makes it easy to place on a conference table or to ceiling mount. The actual offset measures approximately 20% of image height. So for a 100" diagonal 4:3 image, the bottom edge will be projected approximately one foot above the lens centerline. Note that the offset is dependent upon image size and not throw distance; whether at maximum or minimum zoom the offset is always 20%.

The manual zoom and focus lens has the now-standard zoom range of 1.2:1, which allows the 2400MP to produce a 100" diagonal 4:3 picture from 13.5' to 16.2'. The focus knob, while easy to adjust, had a very small "sweet spot" where focus is close to perfect. Focus also changes slightly as the projector warms up, which requires readjustment after the 2400MP reaches operating temperature.

The menu system is as simple as they come. Icons representing different groups of controls are lined up against the bottom edge of the screen, and additional menu items pop up from there. When using a data signal, the only picture adjustments available are brightness, contrast, color temperature, and individual red/green/blue adjustments. Hue, Saturation, and Sharpness are available for video signals, but not data signals.

In the "Display" submenu are the 2400MP's video modes: PC, Movie, sRGB, Game, and Custom. PC is an excellent choice for text display, while sRGB is ideal for video games, photographs, and occasional video. Also included in this section are White Intensity, Degamma, and fine sync controls for data signals.

Other notable options include horizontal and vertical keystone with 40 degrees of adjustment capability, 10x digital zoom, and an option to change the menu from opaque to translucent. Keystone adjustment artifacts on this projector are almost unnoticeable, which is quite unusual. That means if you want to use keystone adjustments to fit a given presentation situation, you can do so without any concern that it will detract much from the picture.

The remote is likewise simple. There is no backlight or pointer feature, whether laser or digital. If you plan on using the Dell 2400MP for detailed presentations and require a pointer, you will have to provide your own. Aside from the standard menu controls and power on/off, there are buttons to control the volume, page up/page down keys for use when there is a USB connection to a computer, a button to cycle sources, an "auto adjust" button to lock on to a computer signal, a "video mode" button to switch the projector's image profiles, a blank screen button, and two buttons to control vertical keystone adjustment. This list encompasses every button on the remote control, so it is not an exaggeration to call it uncluttered.

One small annoyance that bears mentioning is the projector's auto-adjust feature. While it works flawlessly most of the time, it occasionally draws a blank on what signal it is being fed and returns an "out of range" error. This happened on our test unit several times, even when the projector was being fed native 1024x768 over VGA from a computer. While pressing "auto adjust" again is a quick fix, it would be nice if the projector picked up on an input signal every time.

The 2400MP has a one year warranty, which ought to give the projector plenty of time to manifest any kinks or flaws it may have. Even at $1099 a projector is a large investment, and it helps to know that repairs are covered if it ever breaks down.

In high lamp mode on the PC image setting, the Dell 2400MP measured 2647 ANSI lumens out of an advertised 3000. This is excellent performance - the 2400MP delivers 88% of its promised lumen output while still maintaining reasonable color accuracy, contrast performance, and 85% brightness uniformity. Switching to eco-mode yields 2318 ANSI lumens, or a 13% drop in lumen output. Optimized for color performance (sRGB mode, low lamp), our test unit measured 1230 ANSI lumens. The ability to switch operating modes and thereby adjust lumen output over a range of 1200 to 2600 lumens makes the 2400MP a uniquely versatile projector that can be adapted to a variety of screen and audience sizes.

Contrast performance is above average for a data projector. Rated at 2100:1 on/off contrast, the 2400MP can deliver dynamic looking data graphics and photography, especially when compared to many LCD XGA projectors that rate at 400:1 contrast. While there are DLP video projectors that deliver better contrast, the 2400MP is on the upper end of the spectrum with regard to budget data projectors. Contrast performance was easily up to snuff for data presentation purposes.

Color in sRGB mode is actually quite accurate. While DLP projectors traditionally struggle with yellow, the 2400MP turned in a strong performance. It is still not up to the level of many LCD projectors or higher end DLP home theater machines, but it is more than respectable for a business projector. Color performance is not quite as impressive in PC mode, but only because that mode is designed to optimize lumen output at the expense of both contrast and color.

Sharpness was actually a bit of a disappointment. The 2400MP's image looks slightly soft, even when in perfect focus. Edge-to-edge sharpness was uneven; our test unit was not able to produce a clean, crisp picture that was perfectly sharp from edge to edge. Accordingly, we would not recommend the 2400MP for complex spreadsheets, financial data, or documents with small text sizes and fine detail. Conversely, the typical Powerpoint presentation is unaffected by the softness in the image, so the 2400MP does a beautiful job with this type of material.

The 2400MP can also serve well as a projector for photography clubs on a budget. In sRGB mode, the 2400MP still puts out over 1400 ANSI lumens. This is plenty of light to display bright, dynamic images to a group of photography enthusiasts, especially in rooms where ambient light is kept in check. And the projector's slightly soft image is less of an issue since most photographs will not appear quite as sharp on any XGA projector, simply due to compression. Overall, the 2400MP is a good budget-conscious solution for those who don't want to drop three to four times the money on a higher resolution SXGA+ projector.

The Dell 2400MP is not a complex projector. It is built to do one thing - produce as much light as possible while maintaining a portable profile and a price of $1099. It does this one thing spectacularly. The combination of 3000 ANSI lumens, XGA resolution, 5.5 pounds, and $1099 makes it an exceptional value for both mobile presenters and the K-12 classroom market. However, trade-offs have been made to achieve the low selling price. The connection panel is sparse, sharpness is not perfect, and color can appear lackluster if lumen output is maxed.

That said, the simple fact remains that the Dell 2400MP can do what no other projector on the market is capable of--deliver terrific Powerpoint presentations to a wide variety of audience sizes for very little money.

For more detailed specifications and connections, check out our Dell 2400MP projector page.