Home / Projectors for the Classroom
Review by Bill Livolsi

The education market is a huge one for the projector industry. Every classroom and auditorium needs a projector these days. And since most schools are chronically short of funds, those who buy on their behalf are always looking for the absolute best bang for the buck. In this article, we'll take a look at four hot projectors, each of which have attributes that make them strong contenders for classroom deployment. They are the Dell 1409X, the Epson PowerLite 400W, the NEC VT800, and the Sharp XR-32X.

Dell's new DLP-based 1409X is a solid, inexpensive powerhouse in conventional 4:3 format XGA resolution. Our test unit measured 1947 ANSI lumens out of a rated 2500 lumen maximum, making the 1409X a very bright projector. It is also quite portable, at 5 pounds total weight and a small 3" x 8" x 6" case. And considering the high lumen output from such a small package, it has surprisingly little audible noise. On/Off contrast is rated at 1900:1, which is higher than the LCD competition. With one DVI and two VGA inputs, the 1409X can easily be connected to multiple sources, thereby eliminating the need for a switching system and keeping costs down. An onboard 8-watt mono speaker gives users some audio capability, though a separate audio system would be needed for large lecture halls. This projector's low $749 MSRP means you get a lot of light for very little money. However, the 1409X comes packaged with a mediocre remote, about the size and shape of a credit card. While this is great for portability, it makes using the remote more difficult. Video performance on the 1409X is also lacking, in that we observed several instances of frame tearing during our testing. So while it delivers bright, high contrast data and graphic images, it might not be the best choice if your mix of display material includes a lot of video.

Another thing to consider is that the Dell 1409X has a 2x speed color wheel, which can increase instances of the rainbow effect in people sensitive to it. However, rainbows tend to manifest primarily in film or video rather than still pictures and data. Unless you are showing a lot of video on a large screen, this should not be a problem.

The 1409X is a particularly strong choice for classrooms with a lot of ambient light. High brightness ensures that no matter the room's conditions, the projected image will be easily visible.

The Epson PowerLite 400W LCD projector is this company's first widescreen short-throw projector. The native resolution of 1280x800. This resolution is common in laptop computers, and the pixel matrix can also natively display 1024x768, 1280x768, or 720p signals. The widescreen format makes efficient use of a classroom's wallspace.

Short throw projectors are relatively new in the industry, and there are only about half a dozen models released at the moment. The 400W will project a 100" wide 16:10 image from 3' 6" away. At 1400 measured lumens out of a rated 1800, our test unit was sufficiently bright for just about any application in a moderately-lit classroom. The lamp is rated for 4,000 hours in eco-mode and costs roughly $275 to replace.

The Powerlite 400W has a 10-watt mono speaker, which is the most powerful in the round-up. This is a great addition for multimedia content, which can liven up a classroom lecture.

The optional wall-mount allows the projector to be mounted directly above the screen. This has several advantages, such as allowing the teacher to work at the board without interfering in the projector's light path and keeping the projector away from the curious hands of students. This is invaluable, both in terms of security and convenience - it's one less thing to worry about. The wall mount is not included in the price of the projector, but can be had for an additional $300 or less.

Using the 400W's RJ45 network port, an administrator can set up the projector so it can be monitored remotely, which is an invaluable tool when a teacher leaves their projector on. Rather than burn through several hours of lamp life before someone notices, a simple click can turn the projector off from afar.

There are, of course, some small downsides. Compared to the other projectors in this shootout, the 400W is expensive at $1,399 MSRP. The large convex lens, which takes up nearly half of the front faceplate, is subject to fingerprints and dust. Perhaps most importantly, the 400W does not have a physical zoom. Adjusting the digital zoom causes you to lose not only resolution, but almost half of the projector's light output. Using the zoom at anything other than the maximum wide angle setting should be avoided whenever possible. Contrast, at 500:1 on/off, is plenty for the display of text documents and PowerPoint presentations. It is less than ideal for photography or video content, but the projector still produces quite satisfactory images with this type of material.

All in all, if you want a widescreen image from a projector that is suspended safely and securely above the screen, the Epson PowerLite 400W may be exactly what you are looking for. The 1280x800 native resolution allows for versatility with regard to input sources - everything from standard XGA up to 720p video can be displayed natively. While it is a little pricey, the 400W is a great performer. 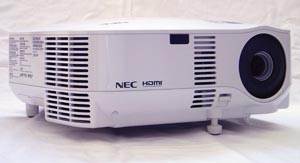 The NEC VT800, a 1024x768 LCD projector, weighs in at 8.2 pounds, making it the largest and heaviest of the four projectors in this review. With that weight comes a bevy of added features, such as an exhaustively complete connection panel. The VT800 sports an HDMI port, two VGA ports, a separate monitor out port, USB, and an RJ45 network jack. The USB port can take a flash drive and play slideshows without the aid of a computer, and the RJ45 jack will allow for not only remote presentation, but remote administration - If a projector is left on in a classroom, it can be turned off remotely. The VT800 is also the brightest projector in the roundup, at 2280 ANSI lumens measured out of a rated 2700. This is more light than you'd want in a typical K-12 classroom, but for larger college/university classrooms it is perfect. Despite its high light output, it operates nearly silently, at 29dB eco-mode. The VT800 also has the cleanest, most artifact free video in the group, thanks to the inclusion of the HQV video processor.

The VT800's 3,000 hour lamp life is about average for this class of product, but it should be noted that the other projectors in this round-up all claim 4,000 hour lamp life. A replacement lamp costs $300 from NEC.

Contrast, on the other hand, is 500:1, or about what is expected from an LCD projector built for business and classroom use. Thus the VT800 would probably not be our first choice if we were displaying video or photography in a dark environment. The remote is large and clunky, with a few buttons that are not active on this model. The menu system has two levels of hierarchy (a top level of tabs, then more tabs inside each top category) which we found somewhat confusing. And the onboard 5-watt speaker is sufficient for small classrooms, but larger ones will require external speakers for audio. Other than these factors, the VT800 had no major flaws.

The VT800 really shines when it is part of a large-scale installation, with projectors installed in many classrooms across the campus. This remote administration capability makes life easier for the people responsible for servicing and maintaining the school's projectors. With street prices around $900, the VT800 is a feature-packed, solid value. 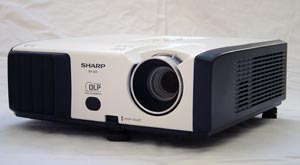 The XR-32X from Sharp has just started shipping at $1095 MSRP, but street prices are already in the low $700 range. Their previous XR-30X has been a popular choice in the education market for some time now. This new XGA DLP projector is another bright portable, cranking out 1912 ANSI lumens at its brightest setting out of a rated 2500 lumens. The lamp is rated to run for 4,000 hours, and a replacement costs roughly $280. Contrast, rated at 2200:1 on/off, is excellent for a data projector, and the XR-32X would perform well with some light photography use. And while most projectors are not small, quiet, and bright all at the same time - at best you can have two out of three - the XR-32X defies expectations and delivers the trifecta. It also incorporates user-friendly operation - when the projector is started, it displays a screen designed to guide the user through aiming and focusing the projector.

On the downside, the remote is difficult to work with due to lots of small buttons that are hard to press and harder to see. The remote has no backlight, so if the lights are off, you may have some trouble finding the function you need. The onboard speaker is also only two watts, which is better suited to small conference rooms than classrooms.

The XR-32X is a good all around projector that does well with every type of display material. If it is used for video and photography, the classroom lights should be dimmed for best results. However, for text documents and PowerPoint, by all means leave the lights on. The XR-32X can handle it.

The four projectors presented here all have unique benefits and quirks which make them useful in different situations. But they are each strong contenders for classroom usage. It is worth auditioning each of them to get an up-close and personal feel for what they are capable of.