Traditionally, if one needed to use a projector in a room with a lot of light, the answer was to get a brighter projector. But what if one could instead get a brighter screen? Elite's StarBright7 is a new 7.0 gain screen material that helps bring lower lumen output projectors into the light of day.

The StarBright7 works by taking the light from your projector and reflecting it back at a narrower angle. As a result, the StarBright7 gives you a significantly brighter picture if you're sitting in the "sweet spot" where all the reflected light is falling. In conference rooms, houses of worship, and lecture halls where the audience is sitting toward the center of the screen, the StarBright7 provides an attractive, affordable alternative to a super bright projector. A 103" 16:9 diagonal StarBrite7 can be had for $1739. 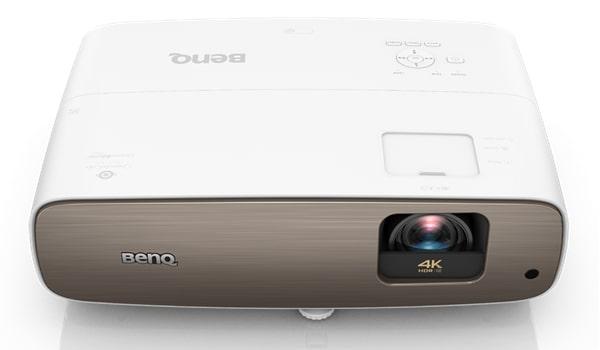 In fact, the StarBright7 is so bright that one may occasionally notice a bit of glare right at the point where the angle of incidence equals the angle of reflection. This is most noticeable when viewing from a close distance as it would be in home theater, but it is not a concern when sitting farther from the screen as most audiences would be in applications where this screen is most likely to be deployed.

Every screen has what's called a half-gain angle, which is the viewing angle at which the screen image appears half as bright as it does at zero degrees viewing axis. The StarBright7 has a half-gain angle of 12 degrees, giving you a 24-degree cone in which the audience will perceive the image at its optimum brightness. Outside of that cone, the image will still be visible, though much dimmer. Outside of a 30-degree area in each direction (or a 60-degree cone), the image becomes much harder to see. For best results, you'll want to plan for as much of your audience as possible to be sitting within an angle not to exceed 30 degrees from center.

The StarBright7 has a visible texture that is noticeable when watching high-definition film or video. In practice, it can make moving images look grainy or artificial. Still images are not affected by this artifact, so if you are planning to use the StarBrite7 for presentations or static digital signage, this is a non-issue.

Finally, our sample screen has some horizontal streaking on its surface, perhaps from the manufacturing process. It is very subtle and not easily noticed - in a way, making it similar to LCD vertical banding of years past. And just like the more subtle occurrences of vertical banding, if you're not actively searching for it, you probably won't see it. Like the texturing mentioned above, this is only really noticeable with motion video/film material since it creates a subtle fixed pattern in a moving image. For anyone planning to use the screen for static image display, this becomes a non-issue.

The Elite StarBright7 is a great presentation screen for rooms in which ambient light demands a brighter image, and where audiences are sitting relatively close to the center viewing axis. While Elite Screens suggests home theater usage for this fabric, we do not feel that this is the StarBright7's best application. The limitations related to hotspotting, graininess and streaking are most apparent only with film/video material and a relatively close viewing distance.

With any other type of static display, from spreadsheets to hymn lyrics, concerns about subtle graininess and horizontal streaking don't apply. For this type of usage, the audience viewing angle is the primary consideration. This screen will perform at its best in rooms or lecture halls that are relatively long and narrow, and becomes less effective if the audience is dispersed at a wide angle to the stage or podium.

In the right setting and with the right application, the StarBright7 delivers an extraordinarily brilliant, vibrant picture. In those installations where it can be deployed to its maximum advantage, it is a cost-effective alternative to a very high lumen projector.

Comments (2) Post a Comment
jeff chen Posted Mar 24, 2009 5:49 PM PST
thanks for the review. This screen was designed mainly in Public Section like Church, Large Conference Room with lots of ambient ligh. Not realy for home cinema in the dark room. but it certainly can work in Living Room with lots of light to watch a 100" picture. Elite Screens thinks, people can not really tell the difference if you are using a 60000:1 contrast ratio projector shoot on a standard matte white screen vs. "Home Cinema Screen". Instead, there is no one home cinema projector today can display nice picure when light is on. and this is something Elite Screens think we need for this industry. That is the StarBright 7 coming from. Yes. Light-On Home Cinema.... Thanks for the review, Elite Screens continue work on new screen material & quality design at the best afford price for all applications. jeff Elite Screens Inc. ps. StarBright 5 and 4 is coming out soon with wider viewing angle.
John Posted Mar 31, 2009 7:21 AM PST
I would really like to see some screen shots of this material. I could only image on a 7.0 gain screen the off axis viewing must be horrendous.