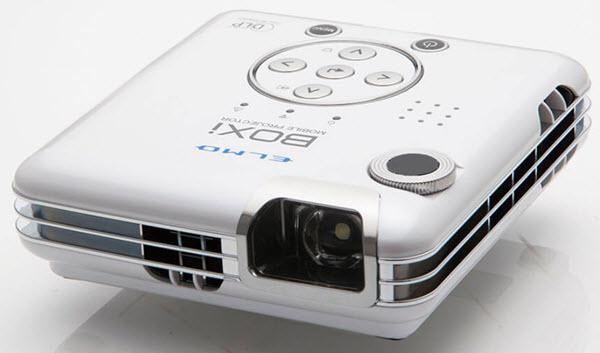 If you haven't heard of ELMO projectors, it's probably because the company has focused on the education market. ELMO is now breaking out of that box, with the ironically named BOXi MP-350.

ELMO calls the BOXi MP-350 a mobile projector. Rated at 300 lumens, it weighs only 1.1 pounds without its power block and is smaller than a typical New York deli sandwich. That makes it light enough to keep in your briefcase, where it's handy for an impromptu PowerPoint presentation you didn't know you'd be giving, or store on a shelf at home, where you can grab it to show photos or watch a movie in whatever room happens to be available.

As is typical for 300-lumen projectors, the BOXi MP-350 is built around a 1280x800 DLP chip and an LED light source. It stands out from the crowd, however, thanks to an eye-catching design, with curved edges and a white case set off by silver and black for the trim and controls. It also delivers more than acceptable image quality and the welcome convenience of being easier to focus than much of the competition. If you need a highly portable projector, it's certainly worth a look, at a minimum advertised price of $599.99.

Good, not great, data image quality. The BOXi MP-350's data image quality falls short of excellent, but it's good enough for most purposes. Colors are fully saturated in all of the predefined image modes, despite being slightly dulled-down in the brightest mode. Similarly, color balance in the brightest mode is a touch off, with the brightest shades of gray slightly pink compared with dimmer shades, but not by enough to be a problem. Other predefined image modes are close to neutral for all shades of gray.

A potentially more serious issue for data images is that the projector doesn't handle fine detail well. With both black text on white and white text on black, for example, characters have a soft focus look at 9 points and are hard to read at 8 points or smaller. Unless you need to show small-size text or fine detail, however, this won't be an issue.

Better than par video quality. Video quality for the BOXi MP-350 is better than average for a 300-lumen portable projector. The 1280x800 resolution translates to 720p widescreen for video, and the image quality is good enough for long sessions. In my tests, the projector did a good job of resisting posterization and showed only a slight loss of shadow detail, even with scenes that most data projectors have problems with. It also did a good job with skin tones, showed only a minimal amount of digital noise with DVDs, and showed even less noise with Blu-ray discs.

Few rainbow artifacts. Also helping image quality is that the projector doesn't show rainbow artifacts easily. The only time I saw red-green-blue flashes with data screens was with one image that's designed to bring them out. They showed more often in video, but primarily in a black and white clip and in night scenes. Even those who see these artifacts easily, as I do, should see them infrequently enough to find the BOXi MP-350 acceptable for watching a full length movie, with the possible exception of black and white films.

Highly portable. The BOXi MP-350 weighs 1.1 pounds by itself and is just shy of 2.0 pounds with its power block and cord. It's also small enough, at 1.7" x 4.0" x 5.2" (HWD) to fit easily in a briefcase or laptop bag, and it comes with a protective sleeve so you don't have to worry about scratching the case.

Adding to the projector's portability is that it can read files directly from a USB memory key, so you don't have to carry anything else with you. I tested it with JPG, BMP, PPT, and Word DOC files. According to ELMO it also reads Word and PowerPoint 2010 files, Excel 97 though 2010 files, PDF format, and most common movie formats. In addition, if your phone supports MHL and you have an appropriate adaptor, you can connect to the HDMI port to use your phone as an image source. And if you have an iPhone, iPad, or Android device, you can download ELMO's app to connect by Wi-Fi.

Easy to focus. Another feature that adds to the BOXi MP-350's portability is that it's easy to focus. This isn't true for much of the competition, and it helps make setup fast and easy too.

Low running costs. As is standard for 300-lumen, 1280x800 projectors, the BOXi MP-350's red, green, and blue LEDs are meant to last the life of the projector. That helps keep total cost of ownership down by eliminating the need to buy replacements. BOXi rates the LEDs at 20,000 hours.

Brightness. I measured the BOXi MP-350 in its brightest mode at 263 lumens, or about 88% of its 300-lumen rating. Its two other predefined image modes, which both offer better color quality, came in at 170 and 190 lumens. It also offers an Eco mode, which cuts brightness by a little more than half, for a measured 123 lumens in the brightest mode with Eco on.

What that translates to is that in its brightest mode, the BOXi MP-350 is bright enough for long sessions for images as large as 70" diagonally with the lights off or 40" with the level of light you'd typically find in a living room at night. In the better color quality modes, the appropriate size drops to about 60" with the lights off and about 34" with the lights on. Keep in mind, however, that you can easily use larger image sizes for short sessions without tiring your eyes.

Good brightness uniformity. The BOXi MP-350 did a good job maintaining uniform brightness across the screen in my tests, with a 79% brightness uniformity score. On a solid white screen, I could see that it was slightly brighter at the center along the bottom of the image, and slightly dimmer at the upper left and right corners. However, the difference was little enough that it was impossible to see with the screen broken up by graphics or text.

Good Connectivity. The back panel of the projector offers only a few connectors, but they're all you really need.

Low audio volume. The 1-watt mono speaker in the BOXi MP-350 is loud enough to hear from two or three feet away, but could easily get drowned out if there's any ambient noise. If you need sound, plan on using an external sound system. Unfortunately, there's no audio output, which means you'll have to plug the audio system into the original source rather than the projector.

No zoom. As is standard for small projectors, the BOXi doesn't include a zoom control. The only way to adjust image size is to move the projector.

Scaling artifacts. As with every 300-lumen projector I've tested, the BOXi shows scaling artifacts even with a 1280x800 image, adding unwanted extra patterns to large areas filled with repeating patterns of fine lines or dots.

Scaling artifacts come from the projector compressing or stretching the information in the input signal, by adding or subtracting pixels, to make it fit the number of pixels available on the imaging chip. By definition, the projector shouldn't have to do this with 1280x800 input signals that already match its native 1280x800 resolution. As I've reported in other reviews, Texas Instruments insists that there is no scaling. However, it also says that the issue is likely due "in part" to the chip's architecture. TI hasn't provided any explanation beyond that.

As a practical matter, unless you use patterned fills in your graphics, you probably won't see these artifacts. However, the apparent scaling also affects fine detail, and is almost certainly responsible for making small fonts hard to read.

The key reasons for considering the BOXi MP-350 are the 20,000 hour light engine and the fact that, although it's bigger and heavier than a pocket projector, it's not much bigger, and it's a lot brighter. It's also small enough to fit in a laptop bag or briefcase, and it's light enough to carry with you even if you're not sure you'll need it.

At work, that means you can have it with you at all times, ready to show images from your laptop or smartphone at a moment's notice. At home, it gives you a quick and easy way to show photos or watch a movie in any room in the house (or dorm room) or even in the backyard on a warm night. All you need is a power outlet to plug into, and a blank wall you can use as a screen.

Beyond these basics, the projector delivers good data image quality, better than par video quality, and doesn't show many rainbow artifacts. It also boosts its portability by being able to read files from USB memory keys and connect by Wi-Fi. And although being easy to focus may seem like a small convenience, its something you'll appreciate, since you'll have to focus every time you set up the projector.

Keep in mind too that the ability to connect to as many as four devices by Wi-Fi to show images from four sources isn't available with most portable projectors. If you need the feature for meetings where more than one person has information to share, that alone can be enough reason to pick the BOXi MP-350 over the competition. Even if you don't need to connect multiple computers at once, however, there's more than enough here to make the BOXi MP-350 a serious contender.