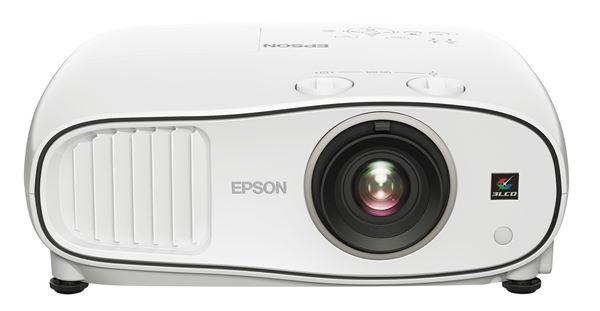 For this review, we ran our usual tests with the 3900 and then ran side-by-side comparisons with both the Sony VPL-HW45ES and the Epson 5040UB, which adds Epson's 4K Enhancement Technology. The results of the direct comparisons are collected together in their own sections near the end of the review.

The Epson 3900 is the only one of the three similar Epson models intended exclusively for professional installation. That makes good sense. The best argument for choosing it over the other two models is that it fully supports ISF calibration, which requires an ISF-certified technician. The ISF-calibration support is also a feature than neither the Epson 5040UB nor the Sony HW45ES offers.

As with most top-of-the-line products, the 3900 doesn't offer the best value of the three related Epson projectors, but it delivers the best performance. All three offer excellent image quality for the price for video and movies, with saturated, vibrant color and appropriately fine detail. Beyond that, both the 3900 and the 3700 build on the 3100, but in different ways.

Compared with the 3100, the 3700 offers a small but noticeable boost in brightness and an imperceptibly higher contrast ratio. The 3900 delivers the reverse: visibly better contrast and imperceptibly higher brightness, at 2700 lumens rather that 2600. The other key differences are that the 3100 adds a highly usable set of 10-watt stereo speakers, while the 3900 lacks a speaker, but adds the ISF calibration, includes a three year warranty in the price instead of two years, and adds an RJ45 connector for control and for sending audio and still images over a wired LAN. 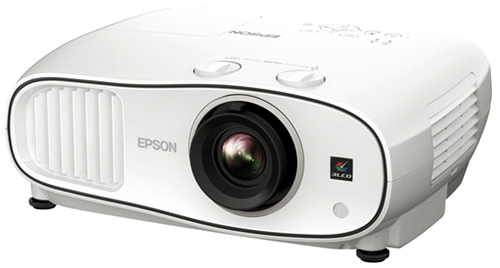 The 3900's picture quality is a close match to the 3100's for film and video, data and presentations, and even 3D. For details, see our Home Cinema 3100 review. Briefly, however, all four color presets--Dynamic, Bright Cinema, Natural, and Cinema--deliver solid video quality straight out of the box. In addition, the 3900's higher contrast ratio delivers darker blacks than the 3100 and lets it hold shadow detail even better. More important, if you take advantage of the 3900's option for ISF calibration--and it's hard to justify the extra cost if you don't--you'll be assured of precise color accuracy and the best picture the 3900 is capable of.

I saw just a touch of crosstalk in 3D. But it appeared only in a single clip that tends to bring out the problem. This shouldn't be a problem if you use Epson 3D glasses, and won't be much of one even if you don't.

For data and presentations, the 3900 delivers vibrant, bright color and fine detail. White text on black was easily readable at 5 points in our tests. Black text on white was crisp even at 4.5 points.

Brightness. As with the 3100, we measured the 3900--which is rated at 2700 lumens--at a substantially higher brightness than its rating. The measured ANSI lumens for each of the predefined color modes in each power setting is as follows, using the widest angle setting for the zoom lens.

Video Optimized Lumens. All four predefined color modes deliver more than acceptable quality for video and film with their default settings. Our choice for Video Optimized setting, however, is Bright Cinema without any changes, thanks to slightly more accurate color than Dynamic mode. At 1930 lumens, it's bright enough for a 200" diagonal 16:9 image in a room with controlled lighting or a 125" image in moderate ambient light.

Zoom Lens Effect. At its full telephoto setting, the lens curtails far less light than typical for the 1.6x zoom. We measured it at 2841 lumens, which is a loss of only 9% compared with the wide angle setting.

Input Lag. Lag measures 28 ms with advanced video processing features off, and up to 102 ms with Frame Interpolation fully engaged.

Setting up the 3900 is identical to setting up the 3100. The two share the same size and 14.6 pound weight, the same 1.6x zoom and lens shift, and the same +/-30 degree vertical and horizontal keystone correction. See the 3100 review for details.

One advantage the 3900 has over the Sony VPL-HW45ES (and the Epson 5040UB for that matter) is support for ISF Calibration. In practice, however, that turns out to be less important than the color quality right out of the box. Using the default color presets for both projectors, the 3900 delivers more natural-looking color for movies and other photorealistic images, and more subtle gradation, which helps give images more of a sense of depth. It's unlikely you'd notice a weakness when looking at the HW45ES image by itself, but when viewed side-by-side with the 3900, the HW45ES has a slightly blue bias which shows most clearly in flesh tones.

Another key advantage of the Epson 3900 over the Sony HW45ES is that it can put out 3130 lumens in its brightest mode compared with a maximum of 1830 lumens on the Sony. In Video Optimized settings the 3900 still has a brlghtness edge but not nearly as decisive -- about 1930 lumens compared with roughly 1720 lumens for the HW45ES.

If you need to use the zoom lens at its maximum telephoto setting, the 3900's brightness advantage is increased. Both projectors have the same 1.6x zoom, but the 3900 full telephoto setting curtails light by only 9%, compared with 17% for the HW45ES. At 14.6 pounds, the 3900 is also notably lighter and smaller than the 20 pound HW45ES, which helps make setup easier.

The most noticeable limitation of the 3900 compared with the HW45ES is that--except for a fully black screen where the auto-iris kicks in--it doesn't achieve the same deep, dark black. For dark theater viewing this gives the HW45ES better contrast and a clear advantage for holding shadow detail. In low to moderate ambient light, as in a living room at night for example, the advantage for the HW45ES isn't as significant, because the ambient light will compromise dark areas on screen and reduce contrast. However, the difference can still be visible, and the lower the ambient light level, the more significant it is.

If you take the time to adjust the color settings, the advantage for color quality also flips to the HW45ES's advantage. Both delivered improved photorealistic color after adjustments, but in more scenes than not, the HW45ES delivered more natural-looking skin tones. Without the side-by-side comparison, you wouldn't notice anything wrong with the 3900's color. It's just that HW45ES's hues are a touch closer to spot on in more scenes. And with the color settings adjusted, the HW45ES's deep black and higher contrast also helps give it a better sense of depth with 2D images.

The frame interpolation features in both projectors offer multiple settings, with a low setting that does a good job smoothing motion reasonably well without slipping into a digital video effect very often. Between the two, however, the 3900's low mode shows the effect a little more often than the HW45ES's TrueCinema mode.

The 5040UB can accept native 4K signals while the 3900 and HW45ES cannot. Although the 5040UB uses native 1080p 3LCD chips, Epson's 4K Enhancement effectively boosts the apparent resolution of the picture through pixel-shift technology. This enables a display of 4K source material and improves the apparent resolution of native 1080p signals by interpolating the additional pixels for each frame. For typical home theater screen sizes and seating distances from the screen, the human eye will see little difference between this pixel shifting approach and a true 4K image.

Even with the 4K enhancement feature turned off, the 5040UB combination of deeper blacks and vibrant, spot-on color, gives its images an obviously sharper look in side-by-side comparison with the 3900. Turn on 4K enhancement, and the difference is even more pronounced. With 4K HDR input, the two are in different leagues.

Another key advantage of the 5040UB is motorized zoom, focus, and lens shift, along with automated Lens Memory, which lets you store 10 different lens positions in memory to accommodate a variety of aspect ratios. Many use this for Constant Image Height adjustments on a 2.4:1 Cinemascope screen. Neither the 3900 nor the HW45ES have this feature.

As a final note, the 5040UB has a longer zoom range at 2.1x compared with the 3900's 1.6x. And it is slightly brighter, at about 2400 lumens for its Video Optimized setting, compared with 1930 lumens for the 3900. Keep in mind however that the 5040UB's longer zoom range also curtails more light at the telephoto end -- 33% compared to 9% on the 3900. So if you are planning to install using long throw distances this should be factored into the equation.

Compared with the Epson 3100 or 3700, it offers incrementally more performance but not as much bang for the incremental buck. Both the 3100 and 3700 essentially match the 3900 for features like its 1.6x zoom and vertical and horizontal lens shift. The 3900 offers a darker black than the 3100 or 3700, but the Sony HW45ES delivers still deeper black along with stunning color at the same price as the 3900.

The Sony HW45ES isn't nearly as bright as the Epson 3900 in their brightest modes, which tips the decision in favor of the 3900 if you plan to do some of your viewing in ambient light. The HW45ES's black level advantage is neutralized in this situation and the 3900 will deliver the more sparkling image of the two. However, if you are setting up a dedicated home theater for permanent dark room viewing, the HW45ES's 1800 lumens is ample for most conventional home theater and its incremental black level is of value in this venue.

On the other hand, if your viewing room does have ambient light, the much less expensive 3100 is essentially as bright, and the 3700 is brighter, than the 3900. In this case the ambient light will tend to neutralize the 3900's darker blacks compared with those two models, giving it little to no advantage for the money.

The key feature that might make you consider the 3900 is its ISF calibration, which the HW45ES doesn't support. But calibration menu options and the ability to store multiple sets of calibrations are the same for all three Epson models. According to Epson, the only difference is that the 3900 adds a hidden feature--usually shared only with installers--to lock the settings after the calibration is complete.

If you're not worried about accidentally overwriting settings that aren't locked, an ISF-certified technician can calibrate any of the Epson models. So the argument for choosing the Home Cinema 3900 over the others boils down to (a) wanting ISF calibration and (b) needing the lock to ensure that others won't tamper with the settings and inadvertently blow the calibration away. Some may consider that important enough to be worth the extra cost. Others won't.
,br>

Comments (2) Post a Comment
SimonBG Posted Apr 11, 2017 5:54 AM PST
Isn't it frustrating when you buy something and they don't let you use it fully (locked menus). I think we need to show manufacturers the other side of our wallets more often.
Steve Posted Jun 20, 2017 2:49 PM PST
I bought the Epson 3900 as an upgrade from the popular 2040 and let me tell you ITS GREAT. This unit does everything that I expected it to do and more. I'm very happy with my purchase and for the money it is far superior to a DLP projector ( which I tried before buying the 3900).