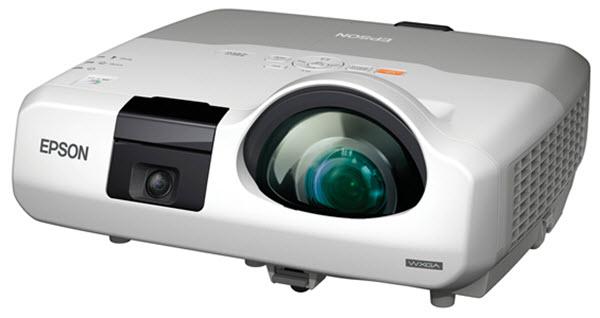 Like Epson's other projectors, the 1280x800 436Wi is built around an LCD engine. Unlike most DLP-based projectors, it lacks support for 3D. However it has the advantage over most DLP projectors of being guaranteed rainbow-free and having matching color brightness and white brightness, with both rated at 3000 lumens. There's also no separate interactive mode to turn on, which means no loss of brightness when you use it interactively.

Some of the more noteworthy interactive features include automatic calibration between the pen and projector, support for working with two pens at once, and a PC-free whiteboard feature, which lets you interact with other image sources besides computers or just use it as a whiteboard with no image source at all. The 436Wi lacks the ultra short throw of Epson's other interactive models, of course, but at $1,490 street, or $1,250 with an education discount, it significantly lowers the price for Epson's more sophisticated interactive extras. You might even consider it a bargain. Excellent data image quality. The 436Wi starts with a foundation of excellent data image quality. Colors are eye catching, vibrant, and nicely saturated in all preset modes. Color balance is also good in most modes, with suitable neutral grays at a range of levels. Some shades of gray in the two brightest modes show a slight tint, but not enough to be an issue for most people.

More important for data images, the 436Wi does a good job holding detail, with both black text on white and white text on black easily readable at sizes as small as 7 points. The projector also did a good job syncing with an analog connection, with nearly rock solid images even on screens that tend to cause pixel jitter. Switching to the HDMI port for a digital connection eliminated what little jitter there was, but there wasn't much to improve on.

Better than par video quality. Video quality for the 436Wi is eminently watchable. In my tests the projector did a good job with flesh tones and with shadow detail, and it showed only a hint of posterization in scenes that most data projectors have much more trouble with. Colors were a little dull, as is typical for a low contrast ratio. But although you won't get the full effect of breathtaking color scenes, the quality is good enough to let you watch a full length movie. It also helps that because the 436Wi is LCD-based, it's guaranteed not to show rainbow artifacts.

Automatic calibration. Unlike most DLP projectors, the 436Wi needs calibration between the pen and projector. However, unlike most projectors that need calibration, it doesn't require you to touch the pen to some number of points on the screen. If you keep the projector on a cart, for example, and have to recalibrate after moving it to another room, you simply press two buttons on the remote and wait about 10 seconds. The projector will put an image on the screen, analyze it, and calibrate itself. The process is nearly as easy and as fast as not needing calibration at all.

Can use two pens. Epson says that the 436Wi can work with two pens at once, so two presenters, or a teacher and student, can each add notations simultaneously. (The projector comes with only one pen, so if you want to use this feature, you'll have to buy a second one, at $49 street.) Because Epson included only one pen with the test unit, I wasn't able to try the feature out. However, I can confirm that the dual pen support I've used with other Epson models works more smoothly than similar features in some competing projectors.

Interact with any image. One of the 436Wi's more unusual features is that it lets you interact with images from virtually any source, or none. The projector includes an annotation mode in firmware that works with any input ranging from Blu-ray players to iOS devices or simply as a whiteboard, with no input at all. You can even freeze a frame from full motion video to mark it up. Freezing the frame doesn't stop the player, however, so when you unfreeze the image, you'll pick up from where the player is, rather than from the point where you froze the image.

Easy to handle pen. Epson's interactive pens, including the one for the 436Wi, are thinner than the pens for most DLP interactive projectors. That makes them more comfortable to use, even if you have large hands, as I do. This will be particularly welcome in a classroom, where children may have trouble with a thicker pen.

Useful audio. The 436Wi's 16-watt mono speaker delivers acceptable, but not great, quality with enough volume to fill a mid to large size conference room or classroom. However, the quality is a little degraded at the highest volume. If you need stereo, better quality, or still more volume, you can connect an external sound system to the stereo output.

Long lamp life. Epson rates the lamp in the 436Wi at a longer-than typical 4000 hours, with Eco mode boosting it to 6000 hours. The replacement cost is either a hefty $299 street, or a bargain $99 with an education discount.

Bright image with a range of brightness levels. The 436Wi came in at 3102 lumens on our tests, or 103% of the 3000 lumen rating. That's easily bright enough for the claimed maximum 116" image to stand up to brighter than usual ambient light in an office or classroom. For smaller screen sizes or lower light levels, other presets range from 1573 to 2051 lumens. In addition, Eco mode lowered brightness by about 34% in our tests, to 2049 lumens for the brightest mode.

Good brightness uniformity. With its measured 72% brightness uniformity, the 436Wi did a relatively good job maintaining uniform brightness across the screen. More important than the raw number is that the brightest and dimmest areas were far enough apart, and the change gradual enough, so the difference was hard to see even on a solid white screen, and impossible to see on a screen broken up with graphics and text.

Good connectivity. The 436Wi offers almost any connector you're likely to need.

No 3D. With at least limited PC-based 3D support all but standard in DLP data projectors today and even starting to show up in LCD projectors, the lack of 3D in the 436Wi counts as a small minus. If you have no plans to use 3D content in the near future, this won't matter at all, but if you want 3D, you'll obviously have to look elsewhere.

The 436Wi offers more than enough to earn your attention if you're in the market for a 1280x800 interactive short throw projector. In addition to excellent data image quality, better than par video quality, and a suitably bright image, it offers a slew of welcome interactive features, including automatic calibration, the ability to use two pens simultaneously, and the PC-free mode that lets you interact with any image from any source or use the projector as a whiteboard.

It also gets lots of points for not dropping in brightness for interactive use, for it's flexible connection choices, and for having a useful audio system with acceptable quality and enough volume for a large room.

If you need a projector for 3D content, the lack of 3D support will be an issue, but in most cases that won't matter. In every other way, the 436Wi is one of the most capable short throw interactive projectors at this writing, and at least arguably the most capable. It certainly belongs on your short list, and to call it an excellent choice would be an understatement.