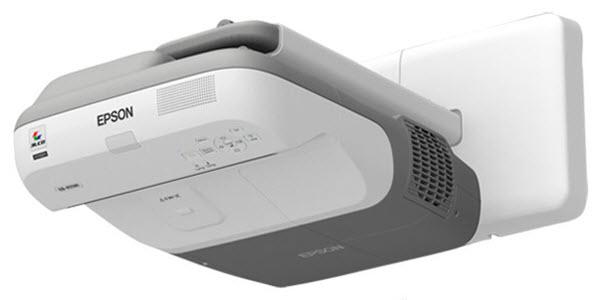 Virtually identical in most ways to Epson's earlier generation ultra short-throw projectors,the Epson BrightLink 455Wi adds one key new feature-you can mount it facing down, towards a table top for example, as well as use the more traditional horizontal position to face a screen.

Paired with interactivity, the new freedom of orientation lets you turn almost any table top into an interactive table as well as turn any hard vertical surface into a substitute for an interactive whiteboard. You can even point the projector at the floor to get an interactive floor space. And thanks to the ultra short throw, you can project large images from just a few inches, which means you can interact without worrying about shadows.

Built around an LCD-based 1280x800 engine, the 455Wi is rated at 2500 lumens. Like most interactive, ultra short throw projectors, it's meant primarily for permanent installation for business use or the classroom. At $2,199 estimated street price, or $1,699 with an educational discount, it costs more than some DLP-based competitors, but the price is more than reasonable, and if you prefer LCD over DLP technology, it's well worth the extra cost.

Ultra short throw. The key advantage for any ultra short throw projector is that it lets you project a big image with the projector close to the screen. This is useful in any case, but for an interactive projector, it means you don't have to worry about shadows. Any that you cast will be small and largely blocked from view by your arm or whatever else is casting it.

We measured a 76" diagonal image at 1280x800, with the front of the projector 7 inches from the screen. This is consistent with Epson's stated range of a 59" minimum image size at 2.7" and a 96" maximum size at 14.5". As with other ultra short throw projectors, the 455Wi gains some distance by projecting from close to the rear of the projector, about 14" further from the screen.

It's interactive. Interactivity is a primary advantage of any interactive projector, almost by definition. As you would expect, the 455Wi comes with a driver that lets you use the interactive pen to control your mouse as well as work with virtually any annotation program.

Comes with almost everything you need. Interactive projectors typically come with almost everything you need, including an annotation program and an interactive pen. The 455Wi goes further, supplying a wall mount kit and a second pen. (At least that's true in the U.S. and Canada. Epson says that in some countries, the package includes only one pen.) If you use the wall mount, there's nothing else to buy. If you want to mount the projector vertically, however, you'll need to buy a table top mount separately.

Optional table mount. Although Epson doesn't list a table mount on it's Web site at this writing, the company says it will add one shortly, and it provided one for this review, the InterakTable Mount for the Epson BrightLink 455Wi from Copernicus Educational Products. The mount, which Epson says will sell for $189 or less, offers the same kind of sturdy hardware as the wall mount, and equally good instructions for installing the mount, but a little less flexibility for setup.

In particular, the mount lets you set the projector up at a choice of four specific distances from the table top, to give diagonal images sizes of 50", 53", 57" or 60" at 1280x800. Note too that the mount requires a sturdy table with a flat underside, without rails or support ribs that might interfere with the clamp that holds the projector in place.

Suitably quiet operation. The 455Wi isn't particularly noisy in standard mode, but when you set it for table top mode, the fan gets quieter still. This is a particularly welcome touch for anyone who's sensitive to fan noise. Few, if any, should find the 455Wi's noise level annoying even sitting right next to it around a table.

Suitably bright image with wide brightness range. The 455Wi's 2500 lumen rating is modest by today's standards, but the projector lives up to the rating, which makes it brighter than many projectors with higher claims. You can also use the interactive feature at full brightness -- something you can't do with most DLP-based interactive projectors. On the other hand, the brightness drops in table top mode. Keep in mind, however, that because table top mode is limited to a smaller image, this compensates somewhat for the lower brightness.

We measured the 455Wi in its brightest mode at 2516 lumens. Various additional presets in standard orientation offer lower brightness, at 1289 to 1777 lumens, suitable for lower light levels. We measured Eco mode with the brightest setting at 1604 lumens, a 36 percent drop from standard mode, and we measured table top mode with the brightest setting at 1698 lumens. (When the projector is set for table top mode, the Eco mode becomes unavailable.) According to Epson, using Eco mode increases lamp life from 2500 to 3500 hours.

Adequate brightness uniformity. This is something ultra short throw projectors often have problems with. We measured the uniformity at 66%, low enough so it could be noticeable if the brightest and least bright areas were near each other. With the 455Wi, however, they're far enough apart, with the brightness changing gradually enough, so the difference isn't noticeable even on a solid white screen.

Excellent image quality for data. The 455Wi did an excellent job with data images on our tests. I saw some slight pixel jitter, but you may never see the problem in real world use, given that it was limited to screens that are designed to bring out jitter. Even then, it was minor enough so it's not much of an issue.

On the other hand, the projector did well on most other images. Both white on black and black on white text, for example, were highly readable down to the smallest sizes we test with, and grays were suitably neutral through the entire range from black to white, despite a slight yellowish tinge at the brightest levels.

Needs calibration. Unlike most DLP interactive projectors, which don't need any calibration, the 455Wi needs to be calibrated whenever you change the resolution or move the projector. This won't matter if you install the projector permanently and always use the same resolution. However, if you put it on a cart to move from room to room, for example, calibrating -- by touching the pen to 25 points on the screen -- can turn into an annoying chore.

No digital connector. With more and more data projectors including an HDMI port, the lack of either HDMI or DVI on the 455Wi is more noteworthy than it would have been even a year ago. For data, it rules out using a digital connection that would give a rock solid image with no pixel jitter. For video, it limits you to either component video, which may not be available on the video source, or standard definition video.

The good news is that the 455Wi offers a wealth of other choices, including two VGA ports that can each connect to a computer or a component video source and both S-Video and composite video ports. These are paired with their own stereo audio inputs, with a miniplug for each VGA port and one set of RCA phono plugs shared by the S-Video and composite video ports. Plug in three sources, and when you switch between images, you'll automatically switch to the right audio input as well. Rounding out the audio connections are a microphone input and a stereo audio output.

In addition, there's a pass-through monitor connector, a USB port to connect to a computer for the interactive feature, a second USB port for a data connection or a document camera (which you can get from Epson or elsewhere), an Ethernet port for data and for managing the projector over a network, and an RS-232 port to run diagnostics as well as turn the projector on or off though a third party controller.

Relatively poor image quality for video. Video image quality is usable but unimpressive, with minor loss of shadow detail and a general sense of dulled down colors typical of a low contrast ratio. However, it's good enough for showing video in a classroom or conference room.

Potentially inadequate volume. The 455Wi's 12 watt mono speaker offers good sound quality and enough volume for a small to mid size conference room or classroom. For larger rooms, however, you'll want to use the audio out port to plug into an external sound system.

The 455Wi delivers everything it promises and more: interactivity, an ultra short throw, its full rated brightness, a high quality image for data, two interactive pens, and even a wall mount. And, of course, there's the newfound ability to project on a table top. You can find less expensive DLP-based projectors with many of the same features, but by the time you finish buying a wall mount and a second pen, they may not be all that less expensive. If you're looking for an ultra short throw, interactive projector, be sure to include the 455Wi on your list.