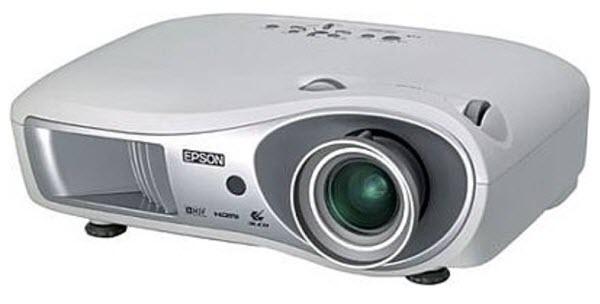 In an ideal world, everyone who wanted great home theater would have a dedicated, light controlled theater room. Unfortunately most people don't have that luxury. If you are among them, the Epson PowerLite Home Cinema 400 with its 1500 ANSI lumen output and $1100 price tag after rebate is worth a close look. With good zoom range and extensive lens shift capability, it can be installed in a variety of home entertainment settings, and is especially useful in rooms with ambient light.

We initially reviewed the Cinema 400 in October of 2006, when the price was $1599. At the time, we could not strongly recommend it due to the strength of competing units in the same price range. However, with a new price of $1099 after mail-in rebate, we requested a second sample and took another look. We are pleased to report that the Cinema 400 now represents a much better value in the home theater projector market.

Connection Panel: One HDMI input, one VGA input, one set of component YPbPr inputs, one D4/SCART input, one S-Video input, one composite input, one RS-232C port, one kensington lock point, one 12V trigger.

The Epson Cinema 400 has the same sleek white case as its predecessor, the Cinema 550. Like the Cinema 550, there isn't much in the way of branding aside from a small EPSON logo on the top of the case and some small technology logos on the front. Hot air exhausts from the front vent and off to the projector's right, so the exhaust is not blown into the path of the projected image.

The Cinema 400 has an air filter that needs to be cleaned occasionally. It is located on the bottom of the projector next to the lamp housing. That means if the Cinema 400 is ceiling mounted, you'll need to take the projector down to gain access to the filter. For some users, this is enough to preclude the option of ceiling mounting the projector. If this is something you don't want to deal with, a rear shelf mount takes some of the hassle out of this process.

The Cinema 400 has an extensive menu system, including many advanced adjustments for fine-tuning your picture. The menu is divided into six tabbed sections that are arranged along the left side of the menu, labeled "Picture," "Image," "Settings," "Memory," "Info," and "Reset." The Picture menu includes the Cinema 400's precalibrated color modes, which are suitable for a wide range of installations. The menu also contains standard controls for brightness, contrast, and color. "Color Adjustment" brings you to a selection of either or RGBCMY controls for more precise color control.

The "Image" menu contains the Advanced menu, which you will want to get familiar with very quickly. The Cinema 400 ships with deinterlacing turned completely off, and there is no auto-detect option -- so to use the Cinema 400 with an interlaced signal, you'll need to turn deinterlacing on manually, which is located in the Advanced menu. Make sure to do this as soon as you get the projector - you won't cause any harm by leaving it on, and it's a mystery why it is not enabled right out of the box.

The remote is easy to hold and has a strong backlight, accessed via a button at the base of the remote. Buttons are available for User Memory recall (of which there are nine memory slots available), Color Mode, Aspect ratio, and menu, as well as all the projector's sources and some controls less commonly found on a remote like Gamma and Skin Tone.

The Cinema 400 also includes an auto iris which dynamically reconfigures itself based on the brightness of the scene being displayed. You can choose to activate the auto iris or not. When switched on, its operation is rather noticeable, in that changing brightness levels were visible on the screen as a gradual fade or rise in lumen output. If this effect does not bother you, by all means leave it on as it will enhance the dynamic range between dark and bright scenes.

Audible noise is rated at a quiet 28dB in eco-mode and 32dB in normal mode. 32dB is a bit louder than average these days for home theater projectors, and as such the projector should be installed away from the audience to reduce the fan noise.

The Cinema 400's image modes can help the projector fit into a number of installations. "Dynamic" mode maximizes the projector's light output and produces up to 1365 lumens. Color accuracy and contrast are compromised in this mode, which is intended for use in a room with plenty of ambient light. Dynamic mode gives the image a decidedly green bias, and black levels were unsatisfying for home theater. But for Sunday afternoon football, or any application where light control is mediocre at best, Dynamic mode will help deliver a bright and watchable image to the screen.

Another operating mode is "Living Room" which does a much better job with color, and can still produce 1036 ANSI lumens with the zoom at its widest angle. If the zoom is at its maximum telephoto setting, lumen output drops off approximately 24%, giving you 830 ANSI lumens to work with. This mode is appropriate for rooms with moderate ambient light, or very large screen sizes. It is also a near-perfect setting for video games, as the projected image is bright and three-dimensional, with excellent color. "Theater" mode is more appropriate for dark rooms, and is still capable of 435 ANSI lumens. So the Epson Cinema 400 does not suffer from a lack of lumen output.

Color performance on the Epson Cinema 400 is superb. With minimal adjustment, we found the Cinema 400 to have a pleasant, well-saturated, balanced image suitable for home theater and video games. While our first test sample had issues with an excessive green cast that could not be calibrated away, the new sample does not exhibit this problem.

As far as deinterlacing is concerned, once it is enabled via the menu as noted above, it performs admirably. With our gauntlet of test clips, most scenes had little if any jaggies and line twitter. For a projector in this price range, there is nothing to complain about here.

Overall image sharpness was reasonably good, but slightly softer than we've seen on other 720p LCD projectors of late. HD content suffered a bit due to this softness, but it was still very clearly High Definition. Signals from HD-DVD and Blu-ray displayed excellent color saturation and contrast, and fine details were resolved beautifully. The slight image softness is something one would only notice in a careful side by side comparison with a competing unit.

Aside from its obvious applications in home theater, the Cinema 400 really shines when it comes to the display of video games due to its high brightness and great color performance. It performs equally well with dark games like Splinter Cell where one spends 99% of the time in the shadows, or bright, colorful games like Halo. No matter what type of gaming material was being played, the Cinema 400 delivered a bright, three-dimensional image that lent a great deal of excitement to the gaming experience.

The Epson PowerLite Home Cinema 400's primary attributes are high lumen output, excellent color performance, versatile lensing, and 1280x720 resolution at low street prices. Installation is more flexible than other projectors in this price bracket, making the Cinema 400 a unique value. While image sharpness was a weak point, the simple fact remains that the Cinema 400 is a strong performer that's easy to install, and won't break the budget at only $1100 after rebate.