(Editor's note: We originally reported the Cinema 720 to have a vertical lens shift range of two picture heights. This was in error, as the actual range is three picture heights. We apologize for the inconvenience and present the corrected measurement here. -wl)

For many years, Epson has been a manufacturer of solid, dependable home theater projectors that were good, but never quite on the cutting edge of price/performance. However, with the release of the new PowerLite Home Cinema 720, this tradition changes. The Cinema 720 is without a doubt their strongest 720p offering to-date. With a blazing 1600 ANSI lumens and 10,000:1 contrast, the Cinema 720 is a highly competitive projector in the 720p category, and an excellent value at only $1299.

Connection Panel: One HDMI 1.3 port, one set of YPbPr component inputs, one VGA port, one SCART, one composite video, one s-video, RS-232C, and a 12V trigger.

The Epson Home Cinema 720 shares the same sleek white case as its two predecessors, the Cinema 400 and the earlier Cinema 550. Once you fire it up, however, the similarities end.

Once you start up the Cinema 720, it is immediately obvious that it is a very bright projector. Our test sample, when used in "Dynamic" mode, produced a maximum of 1453 ANSI lumens. "Living Room" mode measured 727 ANSI lumens, "Natural" weighed in at 482 ANSI, and the three Theater modes (Theater, Theater Black 1, and Theater Black 2) measured 413, 394, and 331 ANSI lumens respectively.

Most people with a light controlled viewing space will want to default to one of the Theater settings while viewing film content, as they give the best contrast and color balance. However, for a room with some ambient light or a very large screen, Living Room provides an extra lumen boost without sacrificing much image quality. And for Sunday-afternoon sports watching, "Dynamic" mode will overpower all but the worst ambient lighting conditions, though color balance takes a hit, taking on a green bias. This bias is noticeable, but not bad enough to make "Dynamic" mode useless -- it is still a fine choice for use in rooms with a lot of ambient light, especially when watching HD sports or similar content.

In terms of contrast, the Cinema 720 is one of the best performing projectors we've yet seen in its price bracket. Black level shows serious improvement over prior Epson 720p projectors, and as you'll see in the comparison section it compares very favorably to other similarly priced models. Shadow detail is likewise rock-solid. When used with good source material, such as an HD DVD or Blu-Ray disc, the Cinema 720 can really do the material justice. 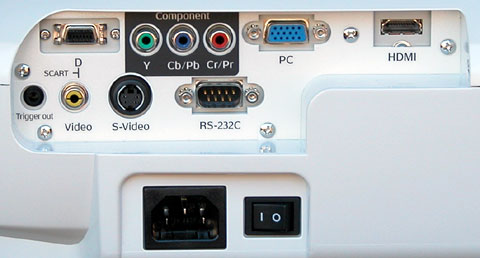 Out of the box, color balance was slightly off, with a push towards red. After some fine tuning, the Cinema 720 produced a well balanced image with excellent saturation - if anything, color saturation needed to be taken down a notch or two.

A 2.1:1 zoom lens puts the Cinema 720 at the top of its class as far as placement flexibility is concerned. Using a 100" diagonal 16:9 image, the Cinema 720 can be placed anywhere from 10'4" to 22'3" away from the screen. This will allow it to be installed in a variety of room sizes fairly easily.

To add to the flexibility, the Cinema 720 also has excellent good lens shift range in both the vertical and horizontal planes. Vertically, the Cinema 720 has a total range of three screen heights, meaning that the entire image can be placed 50% above or below the lens centerline. Horizontally, the image can be moved almost 50% in either direction. This makes the Cinema 720 ideal for rear shelf installation. Ceiling mounting is also fairly simple, thanks to the Cinema 720's vertical shift. In either case, this should mean the complexity of installation should be fairly low.

Epson uses a 170-watt UHE lamp in the Cinema 720, with a replacement cost of about $350. As a result, the Cinema 720 has nice, quiet operation and very little heat exhaust. The heat that is produced is propelled out the front of the case at an angle away from the lens, which should keep the image free of distortion and make rear shelf mounting simple.

One of the quirks of the Cinema 720 is that it has no user selectable low lamp mode. Instead, certain image modes provide higher lumen output than others, so you'll have to pick one that offers the lumens that you need and fine-tune the projector from there. You cannot, for example, use "Dynamic" in low lamp mode to boost lamp life, or "Theater" in high lamp mode to increase lumen output, as the option simply does not exist. Keep this in mind, as the brighter image modes will cause the fan to make more noise than others, but this should not be distracting unless you are sitting within a few feet of the projector.

The Cinema 720 has a very long 2.1:1 zoom lens, which is as high as we've ever seen on this class of projector. At the maximum telephoto setting, the projector loses approximately 45% of its total light output. This is slightly above average for a long zoom lens, but not enough to be aberrant.

The Cinema 720 has a pixel structure which is visible in certain circumstances out to 1.6 times the screen's width. However, at this distance it is only visible when viewing white text, such as in scrolling credits or subtitles. When viewing video or film, pixelation is much less visible. At normal viewing distances, visible pixelation does not detract from one's immersion in the material on the Cinema 720 unless one is hypersensitive to it.

As far as connectivity goes, the Cinema 720 is a little sparse, with one HDMI 1.3 input and one set of YPbPr Component inputs. This is less than some competing units which offer two of each input. If you have several HD sources or need more connectivity, you'll need to use an A/V receiver or a dedicated HDMI switcher.

Many projectors these days allow aspect ratio switching while using HD signals, which allows them to be used with an anamorphic lens without the assistance of an external scaler. The Cinema 720 lacks this feature. However, since people spending only $1299 for a projector are unlikely to invest an additional $2000 in an anamorphic lens, the lack of this feature is irrelevant.

Overall, the Cinema 720 delivers much better contrast, color saturation, and black level performance, whereas the AX200 gives you an incrementally brighter image with no pixelation, and an extra HDMI port. The decision between the two depends on which of these factors is most important to you.

The Sanyo PLV-Z5 has been one of our favorite 720p projectors for a long time. We have done extensive comparative testing of the Z5 with many other 720p projectors, and the Z5 usually comes out on top. However, in this case the Cinema 720 showed better black level, overall dynamic range, and lumen output in all image modes. Color saturation was richer as well.

The Epson Home Cinema 720 is a killer projector. It gives solid performance in all areas with extra emphasis on rock-solid contrast and black levels. With the exception of limited connectivity, it has no major flaws. Meanwhile, the picture quality is outstanding for the money. The Cinema 720 is an exceptional value at $1299, and it was an easy decision to give it not only very high ratings in the 5-star categories, but our Editor's Choice Award as well.