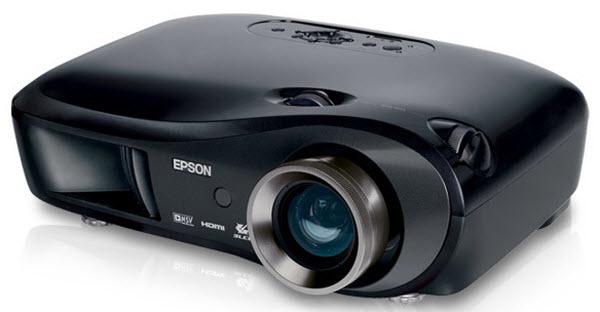 The Cinema 810 is housed in a sleek black case that is reminiscent of high-end sports car stylings (without the rear spoiler). While it all but disappears in a dark room, you won't need to hide it when the lights are on.

The Cinema 810 has a 2.1:1 manual zoom and focus lens, which will display a 100" diagonal 16:9 image from 10.3 feet to 22.2 feet. This allows for placement in a wide variety of locations, from a low mount on a coffee table close to the screen to a high rear shelf or ceiling mount in the back of the room.

Complementing this long zoom range is extensive lens shift. In neutral position, the center of the projected image is on the same level as the centerline of the lens. From there, you can shift the image 100% up or 100% down for a total of three screen heights of shift. Horizontally, the image can be shifted 50% in either direction. Both maximums cannot be reached at once.

The Cinema 810 is a quiet projector. In low power mode, the Cinema 810's fan is little more than a whisper. It is more noticeable in high lamp mode, but if placed a few feet from the audience this will not cause distraction.

To increase contrast, the Cinema 810 has an auto-iris. Disabled by default, its operation on our test unit was unobtrusive and undetectable, and it did a respectable job of increasing on/off contrast.

The Cinema 810's menu system is logically designed and easy to use. Adjustments are divided up into tabs on the left side. Included are some nice features, like a six-axis color adjustment system which includes brightness and contrast adjustments for both primary and secondary colors. There are some quirks, such as the sharpness control, which is divided into "Simple" and "Advanced." To see what setting is being used, you must actually delve into the menu, as there is no "at-a-glance" way of seeing where you have the control set.

The remote control is well-constructed and has a bright backlight. The buttons are logically laid out, with menu controls taking center-stage and other buttons arranged around them. Our only gripe with the Cinema 810's remote is the Aspect Ratio button, which brings up a menu rather than just cycling through the different options.

No projector is without its quirks. On the Cinema 810, deinterlacing must be activated manually through the menu system. This is a bit of a hassle, but it only needs to be done once. The projector also clips a good bit of the image by default, so output scaling should be changed from "Normal" to "Larger" in order to reduce unnecessary overscan.

One of the Cinema 810's principal advantages is its low image noise. In standard definition content, typically noisy scenes were very stable, with a bare minimum of visual noise. This leads to a much more enjoyable picture with a minimum of distracting artifacts.

The Cinema 810 is advertised at 1600 ANSI lumens maximum, and it comes close. Our test unit in "Dynamic" mode measured 1390 ANSI. Dynamic mode is heavily biased towards green, but could be put to use on occasion in a bright room or for a football game. In more "traditional" modes suitable for dark room home theater, such as "Cinema Night" and "HD," our test unit measured 365 and 352 ANSI lumens, respectively. "Standard" or "natural" mode, which both measure 440 ANSI lumens, offer a small boost in light output.

The Cinema 810 has a very long zoom lens, and as with all projectors, zoom setting affects lumen output. At wide angle zoom, or the largest image possible at a given distance, a projector will be capable of its maximum lumen output, but light will hit the screen at more extreme angles. At telephoto settings, or the smallest image and longest throw possible, the Cinema 810 will output approximately 43% less light, but the light hitting the screen will be reflected back to the audience more evenly. For example, "Cinema Night" mode, which measures 365 lumens at wide zoom, measured 208 lumens at the telephoto end of the zoom lens.

Contrast is a notable improvement over the Cinema 400, rated at 5000:1. Black level is clearly deeper, and shadow detail is better defined, with an overall better grayscale. This added contrast helps give the image better three-dimensionality than its lower priced sibling.

Color on our test unit needed some work out of the box. Primarily, we noticed that red was being overdriven. However, with some fine-tuning, the Cinema 810 produces balanced, well-saturated color that is on par with most other 720p LCD projectors selling below $3000.

Image sharpness on the Cinema 810 varies. High definition content suffers from softness, especially when compared to other 720p LCD projectors. On good HD sources, fine detail is lost due to this softness. On the other hand, standard definition material looks superb. Details from DVD are rendered cleanly, and the image looks film-like.

Deinterlacing artifacts were few and far between. On most material, the Cinema 810 did a fine job and left few artifacts. However, on material with a lot of shallow angled horizontal lines (which is some of the toughest content to properly deinterlace), artifacts become more evident. Specifically, diagonal lines at 25 degrees or less from horizontal showed jaggies. A good progressive-scan DVD player would help eliminate some of these artifacts, and would be a good pairing with a new Cinema 810.

While there is no doubt that the Cinema 810 offers rock-solid performance, our main concern is with its current street price. At this writing, the Cinema 810 sells for $2,999, while other excellent LCD projectors that deliver similar performance and resolution sell for less than $2000. Specifically, the Epson Cinema 400 sells for $1,599, and offers most of the Cinema 810's functionality save for a longer zoom range, less image noise, and slightly better contrast.

The Epson Powerlite Pro Cinema 810 is a solid, impressive projector, perfect for dark room home theater with the occasional football game thrown in. It offers excellent zoom, lens shift, and color saturation. However, it lacks in image sharpness in high definition compared to some of the competition and the street price is rather steep for a 720p LCD projector. But if it offers what you need, don't hesitate to check it out.