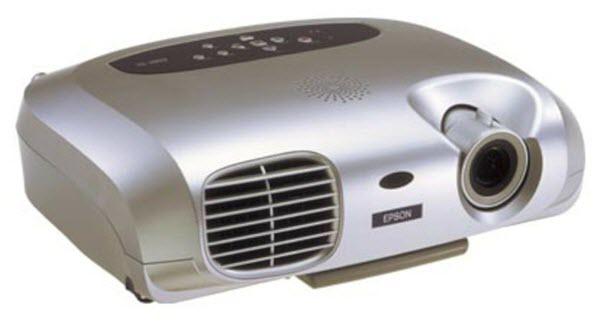 These are golden times for folks who want to spend under $1,000 on a projector. On May 12 Epson announced the new PowerLite S1. At $999, it is their first digital projector to go below the $1,000 price barrier. Not to be outdone, several competitors to Epson have followed suit. InFocus dropped the price of their X1 to $999, Viewsonic's PJ500 was lowered to $999, and last week NEC announced a $200 rebate off of their popular VT460. The VT460's current street price is $1,195, so with rebate you can now get it for a mere $995 (as of this writing the rebate offer is scheduled to expire August 31). Therefore if you are looking to spend less than a thousand dollars for a projector, you suddenly have a few to choose from.

All of these are SVGA (800x600) resolution projectors. And all of them feature LCD technology, with the exception of the DLP-based InFocus X1. The primary focus of this review is the Epson S1. However, we will make some comments on the others at the end.

The PowerLite S1 is rated at 1200 ANSI lumens with 400:1 contrast. The unit features three 0.5" LCD panels with Micro Lens Array, which contributes to a softening of the pixel grid and reduces the screendoor effect that video enthusiasts find bothersome.

This projector has a small 130W UHE lamp with a 2000 hour life. Replacement lamps cost a trifling $199. That might sound like a lot for a lamp to the first-time projector buyer. But high pressure lamps are expensive, and most competing products have lamps that can cost up to twice that much. So it is a BIG deal for projectors in this price range.

The S1 is designed for portability. It weighs 7 lbs. and is 14.6 inches wide, 10.4 inches long, and 4.2 inches high. It comes with a soft-cover carrying case so it can be taken on the road, moved easily from classroom to classroom, or taken home in the evening to do double duty as a home entertainment machine.

The User Manual says you can adjust the size of the image by rotating the zoom ring. However, this unit has no zoom ring. The S1 has a fixed lens with a focus ring. It also has a 1.2x digital zoom. What that means is that from any distance it will throw a fixed full frame 4:3 image in 800x600 resolution. The digital zoom feature will cause the image to shrink within that fixed frame by up to 20%. That lets you match the image to a screen if the screen happens to be too small for the throw distance you have to work with. However, you are throwing away some pixel resolution and light output when you do that. The digital zoom also darkens, thickens, and slightly fuzzes detailed text and numbers (some presenters actually prefer that effect since it heightens contrast and improves visibility from a distance).

The fixed lens is a mild wide angle, throwing a fairly large image from a short distance. The calculation is easy--the diagonal in inches is ten times the number of feet of throw distance. So an 80" diagonal image (full 800x600) is obtained from a throw distance of 8 feet. Move it back to a distance of ten feet, and you get a 100" diagonal picture.

This projector is compatible with all major data and video formats including HDTV 1080i, 720p, and component progressive 480p, NTSC, PAL, and SECAM. It will compress and display an XGA resolution data signal.

The PowerLite S1 is an attractive, solidly built unit. Though priced at only $999, it does not look or feel like a "cheap" projector. Both in build quality and in image quality it has the hallmarks of Epson pedigree.

The most remarkable feature of the S1 in our opinion is the substantially reduced screendoor effect. Though still visible, a combination of reduced interpixel gap and Micro Lens Array produces a remarkably suppressed pixel matrix by traditional SVGA resolution LCD standards. It is very easy to watch movies on this machine without being bothered at all with pixelation.

Another great feature is that it is unusually quiet for an inexpensive unit. Fan noise is at a pitch and volume that constitutes an audible but not intrusive whisper. Impressively quiet we would say, and certainly quieter than most competing units including some that are built specifically for the home theater market.

Epson is known for good color on many of its products, and this is no exception. Graphic images are well balanced and beautifully presented considering the physical limitations of SVGA resolution and 400:1 contrast. The S1 is no match for the phenomenal PowerLite 730c to be sure, but does admirably well given that it is a mere fraction of the 730c's price.

For mobile presenters who don't like waiting through the typical two minute cool-down after a presentation, the S1 offers an alternative-the cooldown cycle takes quite literally only 20 seconds. Rapid cool down is a feature appearing on several new Epson portables, and it is a welcome improvement for mobile presenters on the run.

The S1 takes both component interlaced and progressive video through its VGA port. If you change the output on your DVD player from interlaced to component, the S1 takes just a moment to re-synch on the new signal and it's back in business. Progressive input is probably going to be your best option if you want the sharpest picture as the internal deinterlacer on the S1 renders a somewhat soft image.

Though the S1 will display a compressed XGA computer signal, you won't want to operate it for very long in that manner for text, financial spreadsheets, or any material with critical detail. XGA compression of text is fuzzy and difficult to read (as it is on all SVGA projectors we've seen). It will compress a PowerPoint presentation with bar charts and bullet items just fine. But if Word and Excel material is in your presentation plans and you have an XGA computer, get an XGA-resolution projector to match it. Do not think about saving a few bucks and compressing that detailed material into an SVGA projector.

The S1 is an extremely low-cost projector that is ideally suited for PowerPoint style presentations in business or classroom, with optional part time duty as a video/home entertainment projector. For users on a tight budget with these particular needs the S1 is easy to recommend. It is an outstanding value for the money.

Since InFocus recently dropped the price of the X1 to $999, how does it compare to the S1? Of course they are different machines for different uses. Overall, the S1 is the better choice for data presentations with part time video/home entertainment use. The InFocus X1 delivers more sparkling video and for dedicated home theater use the X1 remains our primary recommendation.

However, having said that, for those who may be bothered by rainbow artifacts on DLP technology, the InFocus X1 is not a good solution. If you are among them, then selecting an LCD-based projector is your better alternative. And in our view the Epson S1, due to its muted pixelation and remarkably low fan noise, is the best SVGA-resolution LCD projector we've yet seen for home theater use.

With the recently announced $200 rebate, you can (until Aug. 31) get an NEC VT460 for the same outlay as the S1. There are several advantages offered by the VT460. First, it is slightly brighter in full power mode. Second, it has a true 1.2x manual zoom lens that lets you adjust the actual size of the full 800x600 frame. Third, it has a 3-year warranty compared to the 2-year warranty on the S1. Fourth, it has an economy mode that reduces light output and extends lamp life from 2000 to 3000 hours. And finally, it can compress up to UXGA (1600x1200) computer signals, although we don't know why anyone would actually want to do that.

Downsides to the VT460 as compared to the S1 include more apparent pixelation in video, a more expensive replacement lamp ($299 vs. the S1's $199), more heat output and higher fan noise.

As a business presentation machine the NEC VT460 is the more flexible of the two products. At $995 it is an outstanding value. If your application is mostly computer-based PowerPoint oriented presentation with just occasional video use, we would give the nod to the VT460. However, if regular part-time home entertainment use is part of your plan, then the S1 will deliver the more satisfying balance of performance between the two applications.