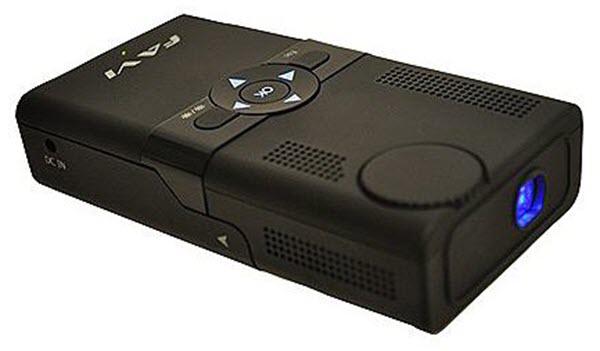 The idea of using a pico projector as a portable video machine is not new. The Favi E1-LED-PICO (henceforth referred to as the E1) is a new VGA pico projector designed for entertainment use. In addition to a solid picture, there are plenty of features and accessories that ensure ease of use--like disposable batteries, an SD card slot, and an international A/C adapter, among others. True, it has a few limitations--low video frame rate being chief among them, followed by low lumen output. But getting a decent, portable video image on a wall or screen for less than $300 is nothing to sneeze at.

The E1 is a great little projector when you want to show something to a small group of people. Those photos you took on your cell phone and want to show off? Even the largest phone screens are tiny compared to the image you can project with the E1. You can put up a 10" diagonal image in very bright indoor light, or a 25" diagonal image in moderate ambient light (say, a 100W lamp a few feet away). For bigger images, you'll want better light control, but the Favi E1 isn't really meant to produce a big picture. It is meant to produce a picture that's big in comparison to other mobile devices.

While photos look great, you might be surprised to learn that video is not the E1's strong suit. Both MPEG and AVI files showed a sharp decrease in frame rate, to the point where watching became distracting--especially during action sequences. While this stuttering might be acceptable if you are showing someone a quick clip of your cat doing something amusing, it would almost certainly grate by the end of a two-hour feature film.

Of course, the E1 is able to do all of the traditional pico projector tasks, as well, like displaying text documents and spreadsheets and PDF files. The only condition is that it does not support these file types natively; you'll have to run everything through Favi's conversion software, which as anyone who's ever used such will tell you is a nuisance. Having to convert your documents means you'll use the projector less for this type of presentation, if only because it's an extra step that must be undertaken.

Light output. The E1 is rated at a maximum light output of 12 lumens; our test sample measured 11 and change. In terms of real-world scenarios, this is enough light for a 25" diagonal image in a typical brightly-lit room or perhaps a 40" diagonal with very good light control--say, indirect light from a window on a cloudy day. You could certainly use the E1 in brighter environs, but be aware that contrast will drop to nothing and text will become quite difficult to read.

LED lamp. The chief advantage of an LED lamp is virtually unlimited lamp life; 20,000 hours is a very, very long time. Since there is no dust filter in the E1 and the lamp is not meant to be replaced, this means the projector has no required maintenance aside from occasionally changing the batteries.

Stereo speakers. The E1 features dual 0.5W speakers. These tiny little speakers do start to sound tinny if you crank the volume to full blast, but at around 75% volume they sound bright and clear, if a little lacking in the bass department. For a small group of friends, it's enough that you'll be able to hear what's happening, which is really all that can be asked of such a tiny projector. A group of 6-8 people is about the largest with which one could show off this projector, and a group of this size will be served perfectly by the onboard speakers.

Highly portable. The big draw of a projector like the E1 is portability. With batteries installed, the E1 weighs only 0.3 pounds, or a smidge under five ounces. That's less than a good-sized apple, for reference. At only 1" depth by 2.4" width by 4.5" length, it is a pocket projector that will actually fit in your pocket. The E1 comes with a small faux-leather carrying pouch to keep it from being scratched up in your bag or pocket; this bag adds minimal bulk.

AA batteries. The E1's use of AA batteries instead of an internal battery pack is a double-edged sword. On the one hand, this forces you to buy new batteries every time you run out of juice; on the other, this allows you to recharge instantly any time you like, and all you need is a new set of AA batteries--which can be obtained anywhere for relatively little money. One thing that everyone will be happy about is that a charge lasts just under four hours, even when watching video the whole time with the sound at full blast. That's impressive battery life for a pico projector.

Included accessories. Plenty of pico projectors plug their portable prowess, but when it comes time to deliver the goods, they require a bevy of "optional" accessories to get the most out of them. Not so with the E1. Included are a full set of cables - Composite video and USB being the most important - as well as the international power adapter and carrying pouch. Also included is a miniature tripod; the E1 has a tripod socket on its bottom panel so it can be positioned easily, no matter the situation.

Onboard storage. The E1 includes a gigabyte of onboard memory, perfect for storing photos and videos you want to share. Simply plug the E1 into your computer via USB and it will show up as a removable drive, as would any USB flash drive you are already familiar with. Drag and drop your files to the E1, then eject when you have finished copying. That's it--you're done. The projector's menu system will direct you to choose either photos or video, and from there you simply scroll through the list and pick what you'd like to see. A slideshow mode is available for photos, while a playlist function can be enabled for video.

If a gigabyte is not enough, the E1 sports an SD card slot, allowing for additional storage. SD cards range from 1GB to 32GB and are small enough that several can be carried without adding significantly to the weight or bulk of the projector. The SD card slot is located under the battery cover.

Video frame rate. As mentioned previously, the E1 has a strange problem where video files appear to have their frame rate lowered, causing a choppy, stuttering appearance. This occurred on both AVI and MPG files, so it is doubtful that it is due to a file type problem. We thought this might be due to the processing power required to properly handle high-resolution video files, but even native 640x480 resolution video clips still displayed the same stuttering frame rate. This is a major hang-up if you want to use the E1 to watch feature films, since the low frame rate can be distracting.

Format compatibility. Possibly the greatest non-hardware advancement made in pico projectors is the ability to display content without the use of an external device. To this end, many projectors now include the ability to display text documents, PDF files, and Microsoft Office documents in addition to photos and videos. The Favi E1 can handle photos and video, but not any of these other documents, which limits its use as a portable presentation projector. If you were thinking about purchasing one as a dual-use product for this purpose, you may wish to reconsider.

Non-adjustable color. Most inexpensive projectors have decent color, but almost all need to be adjusted after purchase to bring performance in line with standards. This is nothing new. But when a projector lacks the ability to customize color settings, it becomes a game of "what you see is what you get." The E1, like the vast majority of pico projectors, has no color control. Granted, the stock calibration isn't bad--there's no obvious push towards green, for example, and overall the picture is actually balanced very well for such an inexpensive projector. A slight push towards blue means that color temperature is higher than some might prefer, but overall it is not a serious flaw. If you use the E1 in ambient incandescent light, as many people undoubtedly will, the blue tint will actually help to compensate for the yellow cast given by that type of lighting.

The Favi E1 is an interesting little projector - a pico designed for home entertainment, rather than just adapted for that purpose by the user. It excels at the display of photography and short video clips, though the lowering of a video's frame rate is a concern. It is the sort of thing one must judge for themselves. If it doesn't bother you, the E1 is a great value, and its long battery life makes it the traveler's best friend. If it does bother you, though, it is impossible to ignore. It is frustrating, because without this flaw the E1 would be nearly ideal as a portable movie projector. It is still a great product to carry in a purse or pocket, and photography looks wonderful on a 20" diagonal image. It's certainly an improvement over the screen on your cell phone when it comes to showing pictures to more than one person at a time. And with street prices under $300, it's not a huge investment, either, though you may draw huge enjoyment from it.

For more detailed specifications and connections, check out our FAVI E1-LED-PICO projector page.

Comments (1) Post a Comment
Ardoni Yonas Posted Jan 9, 2011 10:55 AM PST
I want to ask you a question: can I use this in the classroom of 30 students with a notebook and powerpoint slide?