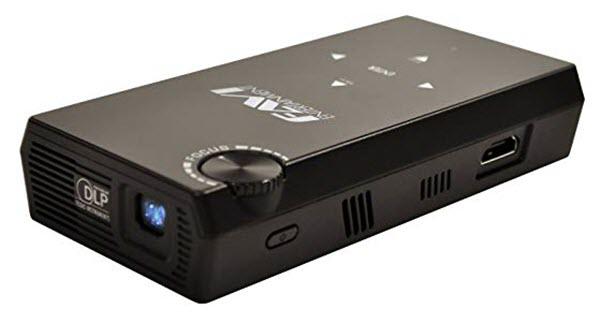 The new E3-LED-PICO from Favi Entertainment is a small projector with big dreams. With a maximum output of 50 lumens, the E3-LED-PICO (henceforth the E3) is one of the brightest pico projectors available, making it perfect for comparatively large image sizes and casual video use. An onboard media player and plenty of storage options make the E3 a highly portable pocket powerhouse. High brightness comes with short battery life, though, and some user interface quirks hinder the E3's otherwise good performance. Due for release in October of this year, the E3 should sell for roughly $350 when available.

The E3 is the follow-up to Favi's E1-LED-PICO (you can read ProjectorCentral's review of the E1 here) released last October, and it is immediately evident that they have made some improvements. For one, lumen output has been quadrupled from 12 to 50. Resolution is up, too; the E3 has a native resolution of 848x480 to the E1's 640x480. The E1's AA batteries have been replaced with an internal rechargeable model. This is a mixed blessing; it's great if you hate buying batteries and not so great if you hate recharging them. Most importantly, the choppy video performance of the E1 is nowhere to be seen. Frame rate is high and action is smooth in every test file we tried, including the same files that gave the E1 so much trouble.

In terms of actual image quality, the E3 turns in a solid performance. In the ideal viewing environment, the E3's contrast is respectable, with very good shadow detail for this class of product. Color, while non-adjustable, definitely ranks in the top half of all pico projectors we've seen as far as accuracy and saturation is concerned. Once focused, the picture is sharp and clear, with plenty of detail. Video is smooth and artifact-free, provided you start with a good source file. If you need a pico projector for video, the E3 has the chops.

The E3 is the quintessential "pocket" projector, though it needs a slightly larger pocket than the one in your pants. It lacks the mini-tripod of the previous E1, but it has a throw angle conducive to placement on a table--the projected image is placed completely above the lens centerline. At around 50 lumens, a 40" screen in ambient light is not out of the question, while a 60" diagonal in a darkened room is still watchable. Personally, I prefer to keep the image smaller, around 30" in ambient light and 40" in darkness, since it helps to punch up the image a bit when watching movies and video clips.

Light output. Pico projectors, traditionally, are not very bright. The E3 is among the brightest at 50 lumens. Our test sample measures a respectable 47 lumens. This allows the E3 to be used at larger image sizes and in brighter environments than most pico projectors. Image sizes can be made larger when viewing text documents or slideshows than when watching video, since these simpler documents are higher in contrast than most video. The E3 has a small selection of image modes, though they seemed to have little effect on color balance or lumen output. We seldom saw a reason to take the E3 out of its default mode.

Onboard media player. The E3's onboard media player is fairly robust, especially compared to its predecessor. For one, it can accept a wide variety of video formats, and it played all of those formats smoothly and without stuttering or frame rate loss. Second, it had no trouble compressing large images to fit in its native 848x480 pixel matrix, which is especially important given the projector's onboard SD card slot. This encourages people to take their SD cards directly from their cameras and put them in the E3, so the projector is likely to deal with some very high-resolution files. Heck, even cell phone cameras these days are up to five megapixels in some cases, with point-and-shoots going up to 12 without breaking a sweat. With the E3, you don't need to spend time resizing your images before you can show them off.

Connectivity. On the E3, the primary input is an SD card slot, which you'll use to load media onto the projector before use. There's also about 100 megabytes of internal memory and a USB port so you can use USB flash drives, but you'll need a micro-USB male to full-size USB female adapter which is not included with the projector. There is also a special composite A/V breakout cable to connect with a DVD player, iPod, or other such device. The included driver software lets you project from your computer over USB, though this software is limited to computers running Microsoft Windows.

Format compatibility. The E3 supports many common file formats, such as mp3 for music, jpeg for photos, and mpeg, AVI, and mpeg-4 for video. Not all video files are created equal, though, and often two files labeled "AVI" can have very different internal characteristics that make one playable and the other useless. If you ever plan to use the E3 to present video in any sort of business capacity, make sure to test your files beforehand. The bundled software also provides a way to convert Powerpoint slideshows and PDF documents into a format that the E3 can understand, as these files cannot be displayed natively.

Touch keypad. With a projector this small, adjusting the controls tends to throw the body of the projector around, which has a tendency to mess up image focus. This gets annoying very quickly. The E3 has a touchpad interface, which means you can access the menu at a light touch instead of a physical button press. The downside is that the controls can be accidentally nudged whenever you're near the projector, as the pad is very sensitive.

Sound. The onboard speaker is not very large or very powerful, and turning the volume up too high introduced some distortion that made dialogue hard to hear. However, keeping the volume at or below 70% of maximum yields perfectly acceptable sound, especially for a projector this small. The projector also has a headphone jack, so you can keep the sound to yourself while you watch a movie. The E3 did not introduce any audio artifacts when using the headphone circuit, either.

Warranty. The E3 has a one-year warranty. This is standard for most pico projectors; a few have two-year warranties, but these are the exception to the rule.

LED light source. The advantage of LEDs is that they last much longer than traditional metal halide lamps. While the E3's lamp life has not been published, similar projectors are expected to last anywhere between 10,000 and 30,000 hours.

Focus. Adjusting focus on pico projectors is never fun, but the E3 has one of the least enjoyable focus adjustment controls yet. The knob is small, with only a small portion exposed. The action is sticky, so you'll need to put some force behind it in order to adjust the dial. And despite the little dial, the focal range is actually quite long, so you might find yourself cranking away for a while before the picture becomes clear. It's also worth mentioning that the projector will not focus at distances less than about eight inches, so if you find yourself unable to focus, try moving away from the screen a bit.

Battery life. Last year's E1 used AA batteries and had a lifespan of roughly four hours on a full charge. We were hoping to see the same out of the E3. Unfortunately, higher brightness and higher resolution come with higher power requirements, so the E3's battery life is only about 90 minutes on a full charge. If you plan on using the E3 to watch a full-length feature film, you have two options: either leave the projector plugged in to the AC adapter the whole time, or pick a short movie.

Menu. The menu system on the E3 is not unusual; it is divided into subcategories based on media type, with subheadings for movies, music, pictures, et cetera. However, the actual layout is highly derivative of Sony's menu system for the Playstation 3, only less elegant. The other annoyance is that, should you want to adjust anything during playback, bringing up the menu will pause your content, though the menu itself is translucent. There does not appear to be a way to turn this off. This really becomes bothersome when what you want to adjust is volume, since you can't adjust in real time.

Charge over USB. The E3 can be charged using a USB connection from a computer, but this takes much longer than using the AC adapter - 8 hours instead of 3 hours. This isn't the fault of the projector, though; USB simply carries a lot less power than a wall current does. The downside of this, though, is that running the projector tethered to a computer cannot keep up with power demands forever. While you can use the projector indefinitely while it is connected to the AC adapter, using a USB connection gives you an extra hour of battery life if you start from a full charge. After that, the battery simply cannot keep up anymore and the projector shuts off.

The Favi E3-LED-PICO is an interesting little projector, with very high brightness for a pico projector in a package tailored for movies and video. Great image quality makes the projector a fine travel companion for entertainment junkies, while the highly capable onboard media player makes the E3 easy to use without a lot of work beforehand. On the downside, the projector's high brightness means it chews through battery power at a prodigious rate, so anyone looking for the full-length feature film experience will need to provide some form of supplemental power. At only $350, the E3 is a solid, inexpensive option for portable entertainment.

For more detailed specifications and connections, check out our FAVI E3-LED-PICO projector page.

Would you recommend the Favi E3-LED-PICO over the Optoma Pico PK301? Thanks. Your site is very helpful.

Yang
Mike Posted Sep 26, 2012 4:11 PM PST
I recently purchased E3. Thus far, the battery only lasts me 45 minutes. When running on battery, the brightness is set to 30 lumens only, and you can not change it. To get 50 lumens, you have to use the AC adapter; the usb charger will not do it either. All in all, it is a good solid projector. I do want to see the battery life a bit longer.