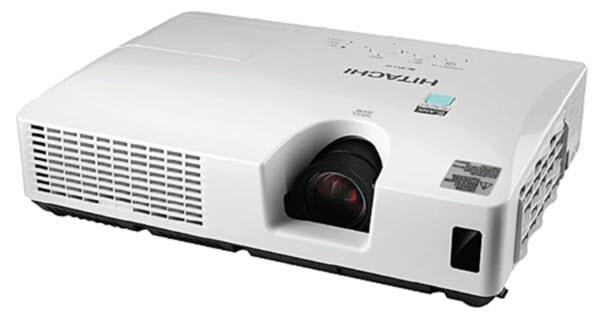 Every now and then, we get pleasant surprises from a projector under test, and that is definitely the case with Hitachi's CP-X2020, a 1024x768 LCD classroom projector that is rated at 2,200 ANSI lumens. The first surprise is not that it meets its brightness specification, but that it does it in its 16:10 aspect ratio mode where the LCD panels are only partially illuminated. In its native XGA mode, it delivers a whopping 2,630 lumens which is nearly 20% over its rating. In a world of increasingly suspect specsmanship, this is a rare find, especially for a projector with a street price of $502.

The other shoe drops when we look at the video performance of the CP-X2020. Most projectors in this price and resolution range do a good job of projecting data images but often come up short on video quality. The CP-X2020, however, delivers video that is impactful and well balanced even if at lower than home theater resolution. It is especially impressive that its Cinema pre-set is so accurate that no adjustments of contrast, brightness, or color temperature are needed to get excellent flesh tones.

The CP-X2020 comes with a three-year warranty and an expected lamp life of 3,000 hours in Normal mode and 4,000 hours in Eco mode. A replacement lamp can be purchased for about $365, and an occasional filter vacuuming is all that is needed for maintenance. The air filter is side-mounted for easy access, and the lamp is accessed through the top cover, so replacement is simple even when the CP-X2020 is ceiling-mounted.

Fan noise is on the high side when you power up the CP-X2020, but the noise exits only from the front of the projector, so most of it is directed away from the audience. Image set-up is easy although the CP-X2020 has only a 1.2:1 zoom lens so placement options are limited for a particular image size. For example, you can only move the projector Â±13 inches from its projection distance of 11' 1" for a 100" image diagonal.

You will discover that remote control key functions are clearly labeled, but in a darkened room, discerning what key does what can be a test. Fortunately, relevant functions are grouped together, and the menu navigation cluster is separate from the function keys, so moving through menus becomes second nature in a short time.

Image Quality - Data images are crisp and saturated, photos have stunning contrast, and small font spreadsheets are readable even with maximum keystone correction. There were no color variations in white backgrounds, and edge-to-edge focus was excellent. You will not be disappointed with any aspect of data projection, but the video performance is every bit as good.

Even with a relatively low contrast ratio of 500:1, the CP-X2020 rendered highlights and black levels better than many classroom projectors. Movies scenes had excellent color balance, and Cinema mode produced natural skin tones with no adjustments needed. XGA resolution can exhibit pixelization, but audiences at least ten feet from the screen will be unlikely to detect it. Also, as an LCD projector, the CP-X2020 is not subject to distracting color wheel rainbow effects that some viewers are sensitive to.

Brightness - The CP-X2020 exceeded its brightness rating by about 20% with 2,630 ANSI lumens in Daytime mode. Normal mode delivered 2,400 lumens, Dynamic checked in at 1,985 lumens, and Cinema put up 1,590 lumens. The Blackboard mode delivered the same brightness as Daytime, but Whiteboard mode dropped the level to 1,455 lumens to cut down on reflections. Eco mode dropped brightness by 35% in all modes, but with that came a 6dB reduction in fan noise. On our test unit, uniformity was 84% with the right side of the image slightly dimmer than the surrounding areas.

Preset Accuracy - There are four Preset modes (Daytime, Normal, Dynamic, and Cinema) as well as blackboard, greenboard, and whiteboard settings. The color temperature and gamma settings for these presets are spot on for their particular applications, and, as noted earlier, the Cinema preset is particularly accurate.

User Memories - Many projectors offer a user memory where you can store your favorite image settings. That usually does the trick if you do not share your projector with a many other users. If you do share widely, the other users will appreciate the CP-X2020's four user memories where they can store their own favorite settings and get to them quickly.

My Buttons - It is convenient to be able to assign one of a variety of functions to each of the two My Button keys on the remote. For example, source information comes in handy while making adjustments, but we suggest assigning Picture Mode to one of them since this setting cannot be accessed while in the Advanced Picture menu.

Personalization - If you are going to be the primary user of the CP-X2020, it offers several ways to personalize screen images and button functions. You can import your favorite image to use as a background instead of the usual blue screen, and you can assign names to various inputs (e.g., "Fred's PC" in place of Computer). You can also assign special functions to the remote's two My Button keys.

Menu System - The CP-X2020's on-screen menu system is divided into two categories. The Easy Menu lets you adjust several basic functions like aspect ratio, keystone correction, and preset picture mode. If you need to adjust brightness, contrast, sharpness and other more specific settings, you go to the Advanced menu with its eight sub-menus to make your adjustments. The menus are not deeply layered, and navigation is easy. The menu can be positioned in ninety-nine different screen locations, but it still covers a good bit of the image regardless of where you locate it. Fortunately, several adjustments collapse to a single line at the bottom of the image to make viewing their effect easier.

Audio Output - The CP-X2020's 1-watt speaker, which is not uncommon at this price point, cannot fill a room with sound and external amplification may be called for, but its clarity is good with no buzz or rattle even at the maximum volume setting.

Image Position - The centerline of the lens is 9" above the bottom of the image for a 100" image at a 4:3 aspect ratio. For cart or tabletop mounting, you will probably need to raise the image by tilting the CP-X2020 upward by extending the front elevator feet on either side of the chassis. Keystone correction will probably be required, and there is Â±30Â° of vertical correction available. The feet operate independently, so they can also be used to level the projector horizontally.

Fan Noise - Even though the fan noise exits through the front panel, in Normal mode it is loud enough to be distracting to those seated within five feet. Fortunately, Eco mode drops fan noise significantly with a brightness reduction of about 35%. Since the CP-X2020 exceeds its brightness specification, you may be able to use Eco mode to decrease fan noise and still have a picture that is bright enough.

Limited Connectivity - There is no HDMI or other digital port, which again is not unusual in this class of product. Even though the CP-X2020 can handle computer and component video signals, it requires a special cable (not supplied) to convert the three component video RCA connectors to a VGA connector compatible with the projector's input.

Placement Flexibility - With no lens shift and a zoom ratio of only 1.2:1 which is typical of projectors in this class, the CP-X2020 may present some location limitations depending on the room configuration. For example, you can only move the projector Â±13 inches from its projection distance of 11' 1" for a 100" image diagonal. Also, you will need to have the projector perpendicular to the screen to avoid horizontal keystoning.

Like many projectors in its price range, Hitachi's CP-X2020 lacks a couple of features such as a digital input and hefty speaker volume, but it makes up for those limitations with excellent data and video performance. We have not seen many projectors that came out of the box and put up such high quality images. In particular, the Cinema preset had outstanding color balance and naturalness, and it was a good choice for both data and video content.

Classroom projectors should have low cost of acquisition and ownership, and the CP-X2020 does not disappoint. It is also a very easy projector to set up and use even when it is shared by several users. We were impressed enough by its quality and versatility that we awarded it a five-star Value rating, and your audience will be similarly impressed.

For more detailed specifications and connections, check out our Hitachi CP-X2020 projector page.